Last week, I didn't have much to write about, so I tried to learn about Brunch and documented my journey. I'll link this journey at the end of this post. User YJDoc2 suggested to also have a look at Snowpack. I heard a bit about Snowpack before (mainly a tweet or two telling how awesome it was), but haven't used it myself. Time to change exactly that!

Let's have a look

Ok, so the website says that Snowpack is the "faster frontend build tool": 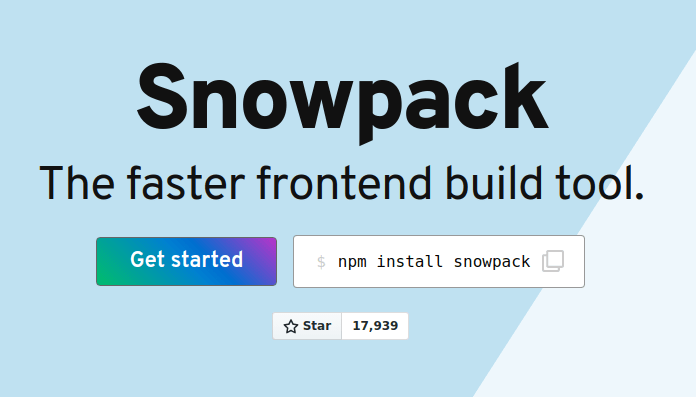 Brunch managed to start between 70 and 100ms. I suspect Snowpack to be in that ball park as well, I mean, this thing has to execute something, right? Brunch already had its problems when Tailwind was added to the build and suddenly we were talking about 70 and 100hms (err, hecto-milli-seconds, basically seconds divided by ten... I should've just written 7-10s. Or deciseconds? ds? Whatever.). But that was mostly PostCSS. I actually suspect the same thing to happen here: A lot of tools (like TypeScript, JSX, CSS, etc.) supposedly work out of the box, but PostCSS needs a plugin. TypeScript is also supported at "build only" and extra type checking would need an extra plugin. Fair enough, I don't expect my build tool to handle everything from the start. But that TypeScript stuff does sound interesting.

(The attentive reader might've caught that I was referencing the docs. I'm not gonna do the same mistake again and just get going without knowing how!)

Same setup as last time: Tailwind + Alpine. Maybe I should change that to a more complex setup to really see where the tool starts to work against me and find possible pit falls, but those two things should do the trick for now.

I'm actually starting to wonder if there's an Alpine-like framework written in TypeScript. Alpine is written in plain ol' JS, so with the stack above I can't really test the TS capabilities of the build tool without having to write custom stuff. Just thinking aloud here... But maybe I'll just write a show/hide component in TS to use with Alpine and see if that plays out nice.

Anyways, I'm eager to try Snowpack now. npm init and lot's of hitting enter it is. I'm really curious about the supposed speed of this tool. So instead of installing a lot of things, I just install Snowpack itself, add the "start" and "build" commands to package.json and add an index.html containing a Hello World:

And now I type npm run start and slooowly hit the enter button...

Seriously, woah. That dev server is basically instant. Gimme a sec, that caught me off guard...

It did log something to the CLI, that much I can tell, but I wasn't even able to read a single word before my browser jumped right in my face, eager to greet the planet like an over-motivated hamster on its first day at its dream job.

I want to know what snowpack wanted to tell me before the browser interrupted it, though, so let's have a look:

Snowpack apparently used its built-in defaults here. I don't think adding a basic config file would slow it down much. I'm amazed that it just works as a plain server, too. Usually I use serve to quickly look at some built stuff, but this thing feels way faster. I think I'll get rid of serve on my system and just use Snowpack instead.

Back to business. Snowpack tells me to create a project config file with snowpack init, so I'm doing just that and do a re-run to see if that has any impact.

Let's get back to boilerplating

The Snowpack documentation has a guide on how to set up PostCSS. I'll follow just that and alter the package.json, add a postcss.config.js and an index.css.

Nothing out of the ordinary, right? Right. Let's try this again:

As you can see, the server still starts in around 10ms, which is awesome, but the entire Tailwind thing needs its 10s. Instead of waiting for the browser window to open, I wait for stuff to load instead. Fair enough, it has to execute the entire Tailwind stuff somewhen. But the hot reloading is blazing fast:

Not too bad at all! Now I wanna get some TypeScript and Alpine in there.

I install Alpine by executing npm i alpinejs and create a simple index.ts:

And I adjust index.html a little:

No server restart, no nothing, it just works™. Hot reloading is fast as always, so the entire thing apparently didn't slow down Snowpack at all. I'm still amazed.

Next up, a little Alpine component:

This I can import in my index.ts:

And then it can be used with some DOM:

I haven't tried the native Svelte integration yet, but if it works like the rest of it, this will probably blow my mind even more. The TypeScript support works with no additional config or even an extra package. If your IDE does the extra type checking Snowpack mentions, you don't even need that.

Zero-config, blasting off at what feels like near light-speed, TypeScript out of the box. I mean, what's not to love?

Here's the article I mentioned above: 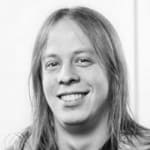 🕵️Something new every now and then: Trying Brunch🍴

I hope you enjoyed reading this article as much as I enjoyed writing it! If so, leave a ❤️ or a 🦄! I write tech articles in my free time and like to drink coffee every once in a while.

If you want to support my efforts, buy me a coffee ☕ or follow me on Twitter 🐦! You can also support me directly via Paypal!

I want to thank Martina who supported me two weeks ago!

Java for web frontend developers, part 2: getting started with J2CL