I was looking for AWS CodeCommit quick tutorial and ended up watching ACloudGuru’s “Manage and Deploy Code with AWS Developer Tools” 8 hour course (BTW, a great one!), reading some articles and AWS documentations. Based on that I’ve decided to create a quick guide to start using AWS CodeCommit via AWS CLI.

What is AWS CodeCommit?

Think of it as an AWS version of GitHub. In other words, AWS CodeCommit is a managed source control service that hosts private Git repositories. You can use CodeCommit to store and manage documents, source code, and binary files in the cloud. 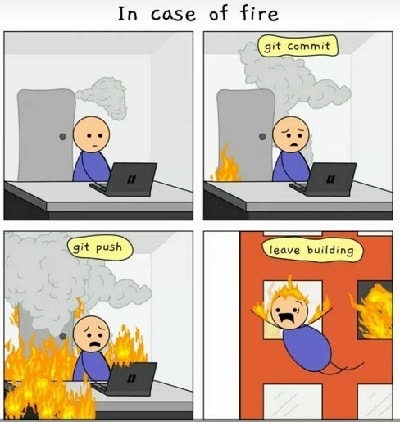 CodeCommit is integrated with a number of AWS services such as CodeBuild, CodePipeline, Lambda, SNS, Amplify, CloudFormation, etc.

Both can be primarily classified as "Code Collaboration & Version Control" tools.

Based on comparison provided by CompareCamp, here are some cons and pros of both services:

On the other hand,

Of course, you can use AWS CodeCommit console with friendly UI to manage files and repositories directly. But in order to work with multiple files, files across branches, and also to control multiple AWS services from the command line and automate them through scripts consider setting up your local computer to work with AWS CodeCommit via AWS CLI.

Firstly, create a new AWS IAM user and give it a Programmatic access

Store a user's credentials in a safe place

AWS CLI will also ask you to enter the Region whose servers you want to send your requests to. By default it is typically the region closest to you, but you can enter any other region.

And finally, you might want to specify Output format how the results are formatted. json is used as the default, but you can use yaml, yaml-stream (streaming allows for faster handling of large data types), text, and table formats.

Alternatively, you can set up AWS CodeCommit using SSH connections for Windows and for Linux, macOS, or Unix.

Here is a full list of AWS CodeCommit commands. In this article, we are going to understand how to use the top command. Just follow along the guide to get a basic experience with AWS CodeCommit.

You should find a new repo on AWS CodeCommit Console: 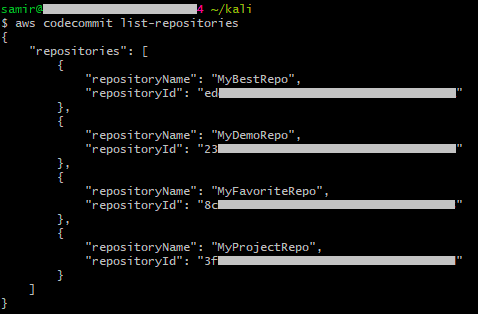 then run the following commands:

Important! If a Windows Security is popped up asking for username and password, then cancel it 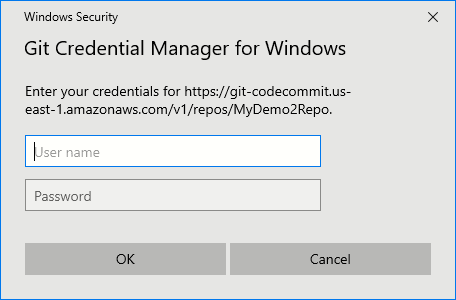 In my case I still got the warning about an empty repository with a successfully copied repository on my local machine.

The issue has gone once I've uninstalled and reinstalled Git for Windows with cleared the check box for the option to install the Git Credential Manager utility (details) because the credential manager is not compatible with the credential helper for AWS CodeCommit.

If you got different kind of issues while attempting to clone a repository, see AWS's Troubleshooting section.

As a result, a new "hello.txt" file should be added to remote repository:

To manage branches, merges, tags, logs, etc, use Git commands. You can find the full list of Git commands here and one of my favorite Git cheat sheet here.

Also, it you want to know how to migrating a repository from GitHub into AWS CodeCommit via AWS CLI, check this article.

Let's configure "MyDemo2Repo" repository in AWS CodeCommit so that any event triggers Amazon SNS to send a notification to email.

Step 1. Give an IAM user some permissions to manage Amazon SNS

An IAM user named 'code-commit-user' doesn't have enough permissions to manage an Amazon SNS. In addition to AWSCodeCommitFullAccess policy you might want to attach AmazonSNSFullAccess policy to that user:

To create a topic, use the aws sns create-topic command and specify the name to assign to the topic:

You should get a TopicArn as a response - write it down for step 3:

Create a subscription and subscribe to a topic specifying TopicArn:

AWS immediately sends a confirmation message by email to your address. You need to confirm the subscription.

Once confirmed, your browser should display a notification message with information similar to the following:

You can find a newly created topic on Amazon SNS Console:

Next step is to create a trigger for a CodeCommit repository so that events in that repository trigger notifications from SNS topic.

Firstly, create a JSON file that specifies SNS topic name, the repository and branches you want to monitor with this trigger, and the events that activate this trigger.

In our example we used all event type but here is the full list of event types you can create triggers for:

Note, you have to use file:// before the json name.

If successful, this command returns information similar to the following:

Now it's time to create a trigger in AWS CodeCommit that is described in json file. The command is similar to the previous one but instead of 'test' use 'put':

This command returns a configuration ID:

Check your email, you should get a very first notification from AWS:

If you want to view the configuration of the trigger for target repository, run:

To test the functionality of the trigger itself, make and push a commit to the repository where you configured the trigger. You should see a response from the Amazon SNS topic.

As a result, a new "test-sns.txt" file should be added to remote repository and a new notification from AWS should be sent to your email:

To avoid ongoing charges for resources you created to complete this guide, let's delete our repository and sns topic:

All done! Till the next time.

What is Amazon EKS Connector ?.

Once suspended, tiamatt will not be able to comment or publish posts until their suspension is removed.

Once unsuspended, tiamatt will be able to comment and publish posts again.

Once unpublished, all posts by tiamatt will become hidden and only accessible to themselves.

If tiamatt is not suspended, they can still re-publish their posts from their dashboard.