Luckily, with the power of ⚡ GitHub Actions and Docker, it's simple to replicate auto-deploy yourself.

You can find the final example repository below:

We'll be able to git push origin live some changes, and find that your server has automatically pulled the changes, built a new image, and restarted the containers, without lifting a finger.

This guide assumes a basic understanding of Docker, Git, and bash, and that you have a VPS or another Linux machine already provisioned. The stack for your app doesn't matter here!

In this example, we'll be using the default ASP.Net Core webapp template. It doesn't matter what stack you use, as long as it's Dockerized.

That'll get us started with a simple webapp, found at localhost:5000. 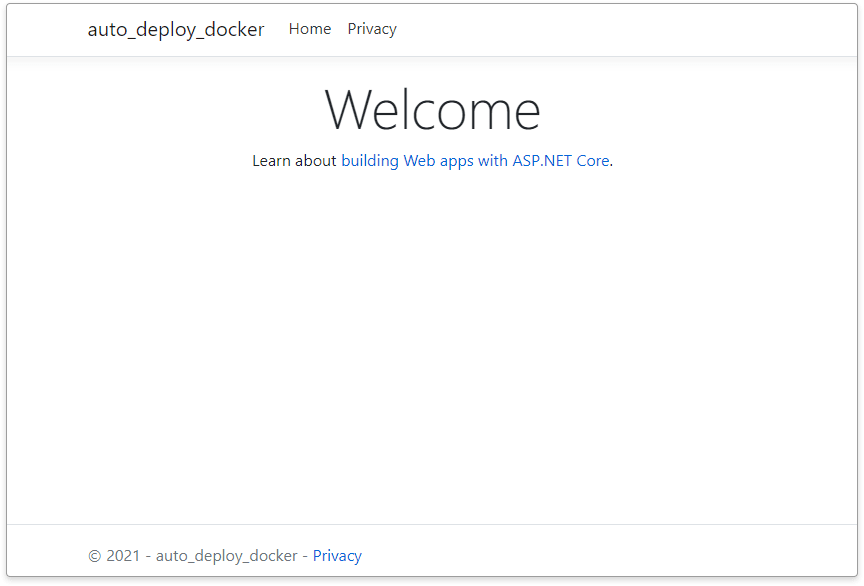 Drop a Dockerfile at the root of the project. We're going to steal the config from Dockerize an ASP.NET Core application as it fits our needs. I've annotated the file with comments.

To reduce the size of the image, drop a .dockerignore so we don't copy in the binaries from the context. We don't need these, because we're building the project inside the container.

Note: For deployment pipelines, it's generally preferred to build the project outside the container, and use the compiled binaries in the image. We won't worry about that for this guide.

Let's build the image and verify it works locally. Make sure you exit the dotnet run dev you started earlier, so it doesn't hog up port 5000!

Navigate again to localhost:5000 and you should see the same app.

Great! The last thing we'll want to do here is make use of the powerful Docker Compose. If you've not used Compose yet, it's basically a way to define all the containers we need to use for our app with a docker-compose.yml configuration file, which means we can put them all up and tear them all down in one go without faffing around with other commands.

In this example, we're only running a single webapp in a container, but if you need to add other services - like a background worker, or a database container, Compose helps you orchestrate them. On top of that, it lets you configure containers to automatically restart when they go down or the host machine is restarted.

Make a docker-compose.yml and fill it out as so:

Give it a shot (again, make sure you stop the previous docker run)

Nice. We've got everything up and running locally. Commit your app to GitHub, and make a live branch that reflects what will be live on our VPS. This is where we'll push changes to have them deployed on the server.

💻 Dropping our app on the VPS

It's time to take things remote. SSH into your VPS (I'm using PuTTY), and make sure you have Git and Docker installed. I'm using a Debian with Docker image from OVH. At the moment, they're doing a nice $3.50 a month VPS.

Start by enabling credential caching. This will save our GitHub username and Personal Access Token. It will, however, save it in plaintext, so make sure you have tight control over your VPS.

Next, clone your repo.

Git will prompt you to log into GitHub if you haven't already. You can't use your GitHub password here, you'll need to generate a Personal Access Token and use that in place of a password. Limit the scopes for the PAT. We only need repo access on the VPS.

Great! Let's give it a test run.

(remote shell)
Navigate to your server's IP address, and you should see the page up and running. Fantastic!

Next up, we'll write a bash script for automatically pulling changes and deploying them.

Let's recap where we are.

In order to respond to changes to the code, these are the steps we need to take:

We'll wrap these steps up in a little deploy.sh script that will handle this all with a single execution.

Note: If you're developing on a Windows platform, make sure you change your line endings to use \r (Unix-style) instead of \r\n, or bash on the server won't understand the script.

Make the script executable, and give it a shot!

It might take a couple of minutes, but you'll be able to watch it pull changes, build your image, and start the containers up.

Connect to your VPS and you should see the app!

⚡ Setting up the GitHub Action

We've got our deploy.sh script ready to go. The final piece of the puzzle is to set up a GitHub Action that will automatically invoke this script whenever the live branch has been updated, completing the loop.

Jump onto your repo on GitHub, navigate to the Actions page and hit skip this and set up a workflow yourself. 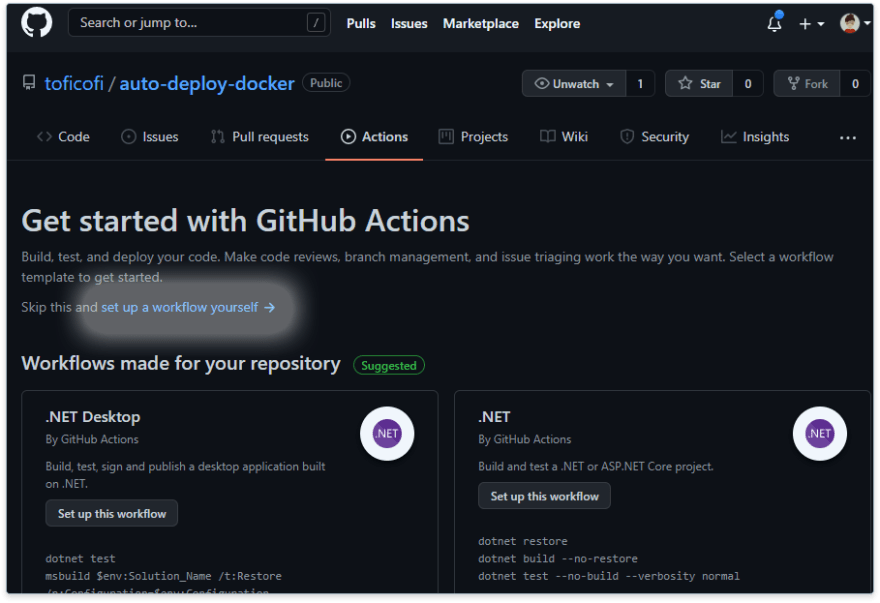 You'll be presented with a templated Workflow script. It looks a little overwhelming, but it's really just a list of "actions". Each Action is triggered by something, like a push to a branch. It will then execute a sequence of steps in a GitHub-provided container. You can read more about Actions here.

We're just going to use the action to SSH and invoke our deploy.sh script whenever the live branch is pushed to.

Drop this workflow script in:

This should be pretty self explanatory. Commit the workflow script to the live branch.

We'll need to allow the Action to access our SSH host, username, password and port. Go to Settings > Secrets. 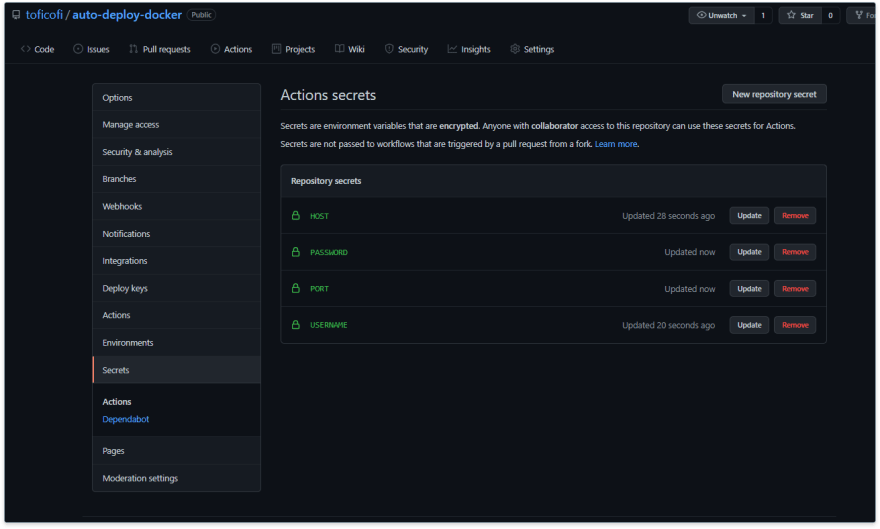 NOTE: These secrets are accessible to anyone with Contributor access to the repository, which means they'll be able to log into your VPS. Be careful.

With the secrets added, that should be us ready to go. Let's give it a whirl!

On your local machine, make a change to your app. For example, we'll change Index.cshtml to show "Hello, Auto Deploy!"

Push your changes to the live branch, and jump onto GitHub to watch the action. You'll be able to see GitHub executing each step for you. Once it's done, navigate to your server IP/domain and some ✨magic✨ has happened! 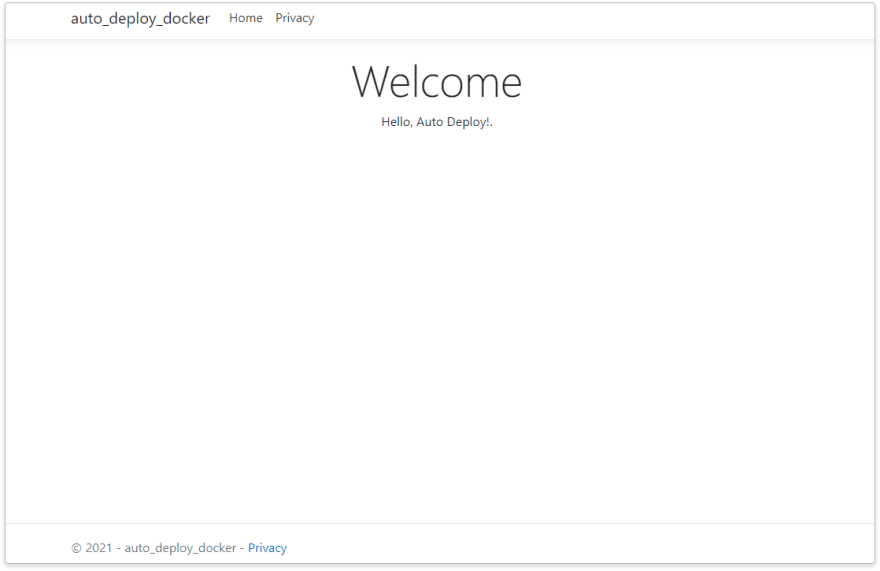 Now that you've completed this guide, you'll be able to deploy your changes on your VPS with a simple git push. This will save you a ton of time, and makes a foundation for a CI/CD pipelines.

🎉 Thanks for reading! You can find me on Twitter here. and on LinkedIn here.

Once suspended, toficofi will not be able to comment or publish posts until their suspension is removed.

Once unsuspended, toficofi will be able to comment and publish posts again.

Once unpublished, all posts by toficofi will become hidden and only accessible to themselves.

If toficofi is not suspended, they can still re-publish their posts from their dashboard.

Once unpublished, this post will become invisible to the public and only accessible to Josh Lee.

Thanks for keeping DEV Community 👩‍💻👨‍💻 safe. Here is what you can do to flag toficofi:

Unflagging toficofi will restore default visibility to their posts.