TL:DR - Skip the theory - Take me to the code

Notes: For this article it is required that you have installed working version of Node.js on your machine. You will also need an http client for request handling. For this purpose, I will use Postman.

What are streams for Node.js?

Streams are a very basic method of data transmission. In a nutshell, they divide your data into smaller chunks and transfer (pipe) them, one by one, from one place to another. Whenever you're watching a video on Netflix, you're experiencing them first hand - not the whole video is initially sent to your browser, but only parts of it, piece by piece.

A lot of npm and native node modules are using them under the hood, as they come with a few neat features:

You have a single file with a size of 4 gb. When processing this file, it is loaded into your computers memory. That would be quite a boulder to digest all at once.

Buffering means loading data into RAM. Only after buffering the full file, it will be sent to a server.

Streams, in comparison to the example above, would not read/write the file as a whole, but rather split it into smaller chunks. These can then be sent, consumed or worked through one by one, lowering stress for the hardware during runtime. And that's exactly what we'll build now.

Instead of loading the whole file, streams process parts (chunks) of it one by one.

In a nutshell, streams splits a computer resource into smaller pieces, working through these one by one, instead of processing it as a whole.

... or skip to the full example right away

Also, let's do the following to get started:

When everything is done, you should have a folder structure that looks like this:

Add the following to your index.js file to create the server listening to request:

Then open the project directory in a terminal / shell and start the server up.

Navigate to http://localhost:3000. You should see the expected response.

Writing a basic stream to save data to a file

There are two types of streaming methods - one for reading, and one for writing. A very simplistic example of how to use them goes like this, whereas whereFrom and whereTo are the respective path to from and to where the stream should operate. This can either be a physical path on your hard-drive, a memory buffer or a URL.

After being created and till it closes, the stream emits a series of events that we can use to hook up callback functions. One of these events is 'open', which fires right after the stream is instantiated.

Add the following below the app.get() method in the index.js - file

What I found particular interesting about this one is:

Why does the req argument have a pipe method?

The answer is noted in the http - module documentation which express builds on - a request itself is an object that inherits from the parent 'Stream' class, therefor has all its methods available.

Having added the stream, let us now reload the server, move to Postman and do the following: 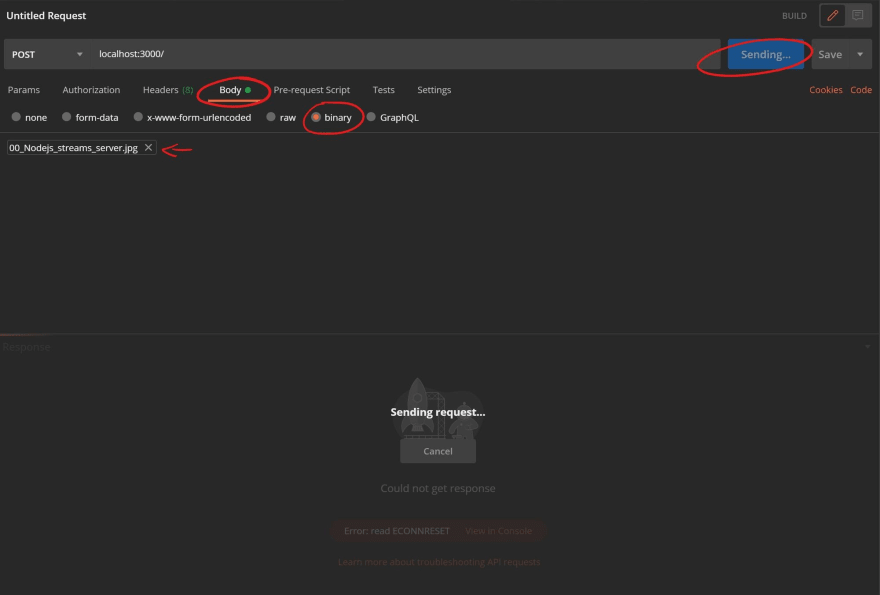 If everything went well, you'll notice the file you just chose is now available in the project's root directory. Try to open it and check if the streaming went successful.

If that was the functionality you were looking for, you could stop reading here. If you're curious to see what else a stream has in stock, read ahead.

Use stream -events and -methods

Streams, after being created, emit events. In the code above, we're using the 'open' - event to only pipe data from the request to its destination after the stream is opened. These events work very similar to the ones you know from app.use(). and make use of node's event loop. Let's now take a look at some of these which can be used to control the code flow

As soon as the stream is declared and starts its job, it fires the open event. That is the perfect opportunity to start processing data, just as we've done previously.

Whenever a data chunk is being processed, it's 'drained' to / from somewhere. You can use this event to e.g. monitor how much bytes have been streamed.

After all data has been sent, the stream closes. A simple use case for 'close' is to notify a calling function that the file has been completely processed and can be considered available for further operations.

If things go sideways, the error event can be used to perform an action to catch exceptions.

Let us now integrate the three new events with some basic features. Add the following to your main.js file, below the closing of the 'open' event:

Since you probably would not drop your functions right into a .post() callback, let's go ahead and create its own function to wrap this article up. I'll spare you with the details, you can find the finalized code below.

Also, if you skipped from above, the following is happening here:

Now it's your turn. How about building a user interface that takes over the job of sending a file to the root path? To make it more interesting, try using the browser's filereader API and send the file asynchronously, instead of using a form. Or use a module like Sharp to process an image before streaming it back to the client.

PS: In case you try the former method, make sure to send the file as an ArrayBuffer

This post was originally published at https://q-bit.me/use-node-streams-to-upload-files/
Thank you for reading. If you enjoyed this article, let's stay in touch on Twitter 🐤 @qbitme

tq-bit
Tobias is a selftaught web developer who loves reading, coding and cooking. On sunny days, he can be found hiking through the Teutoburg Forest, on rainy days he preferes a good fiction novel
How to use node.js for Server-Sent Events (SSE)
#javascript #webdev #tutorial
How to add a Twitter button to your website with HTML, CSS & Javascript
#javascript #html #css #webdev
Getting started with Rust as a web developer
#rust #javascript #todayilearned #programming

Once suspended, tqbit will not be able to comment or publish posts until their suspension is removed.

Once unsuspended, tqbit will be able to comment and publish posts again.

Once unpublished, all posts by tqbit will become hidden and only accessible to themselves.

If tqbit is not suspended, they can still re-publish their posts from their dashboard.

Once unpublished, this post will become invisible to the public and only accessible to tq-bit.

Thanks for keeping DEV Community 👩‍💻👨‍💻 safe. Here is what you can do to flag tqbit:

Unflagging tqbit will restore default visibility to their posts.