On January 19th (after fretting for at least two weeks), I finally launched Hello Web Design on Product Hunt (You know, my book/video course teaching design for non-designers.

Video/vlog version of this post! Trying to get better at speaking on camera so I'm doing a video version of all my posts.

The post did way better than I hoped, becoming the #5 product of the day.

Here’s my recap of the process and what I learned from this go-around. 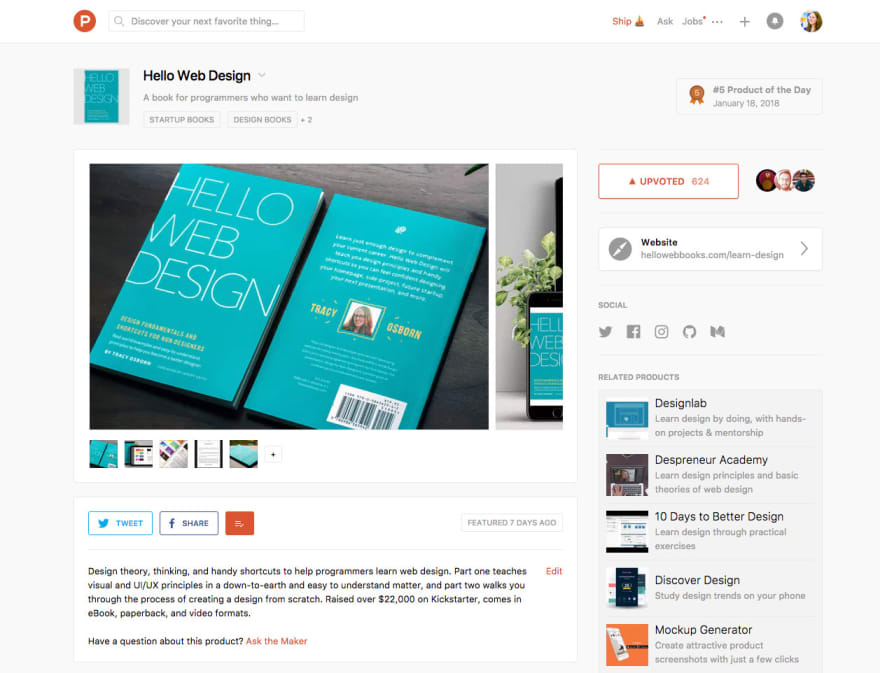 It’s been quite awhile since I launched on Product Hunt and the community has evolved quite a bit.

Thankfully Product Hunt has their own guide on launching on Product Hunt, which was super helpful (I recommend checking it out first) but even so, I was still confused by a couple major things.

One of the questions I had was what time of the day (and what day) to post? Since your accumulate points throughout the day, you need to post early enough to start building momentum and traction.

The Product Hunt guide is very clear I shouldn't worry about this, but I still did (such like me). Other guides on the internet advocated for posting at ridiculously early times like 3am ET. I knew it didn’t matter too much about when I posted, but I also wanted to post it as early as possible just in case.

In the end, I set up my listing the night before and posted right when I woke up, at 7am ET/4am PT. It was a little worrisome since there were quite a few other posts with a bunch of points by the time I woke up but in the end I still did well.

It’s been so long since I did a PH listing so I was unfamiliar with the process.

I took a look at a few other successful Product Hunt pages (like Marketing for Developers) and worked on my content in Google Docs for a few days perfecting what I wanted the sub-title, description, and introduction post to look like.

A major point of confusion was that you can’t set the description when you’re going through the four application screens to submit your product. Turns out, after the application is submitted, the description field and a bunch others pop in (like social media, which I originally put in as links in the application). Not the best UX but I figured it out in the end.

The four pages to go through before submitting your product don't include a description field (seen on other listings), which confused me.

As soon as the post was up, I sent a newsletter to my ~5,000 newsletter subscribers.

I believe this is the reason why the post did so well — I'm lucky to have a small audience built up already over the years. In the post, I asked them to check out the listing and ask any questions they might have for me. I didn't ask for upvotes, but I'm sure anyone who knows Product Hunt read between the lines.

I also posted to Twitter several times during the day. I'm not the biggest fan of Twitter nowadays and the tweets didn't get that much traction, but it's one of those things that I might as well do.

That was pretty much the extent of my sharing efforts — I mostly relied on my newsletter friends. 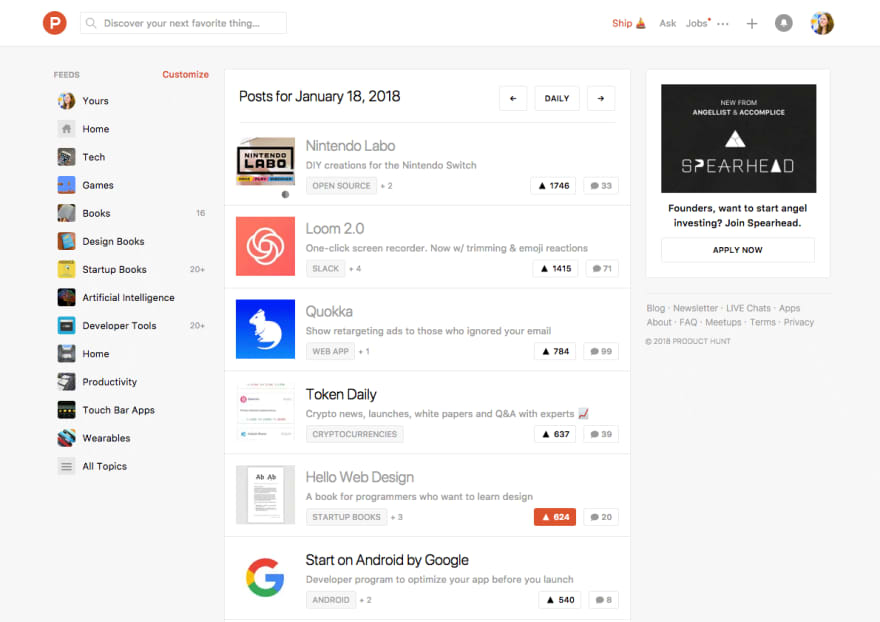 In the end, my post hit #5 for the day. I actually didn’t think it would, as in the list for the day, Hello Web Design was actually at #6 — I completely missed that one of the posts above mine was a sponsored post, and apparently ineligible for that ranking. 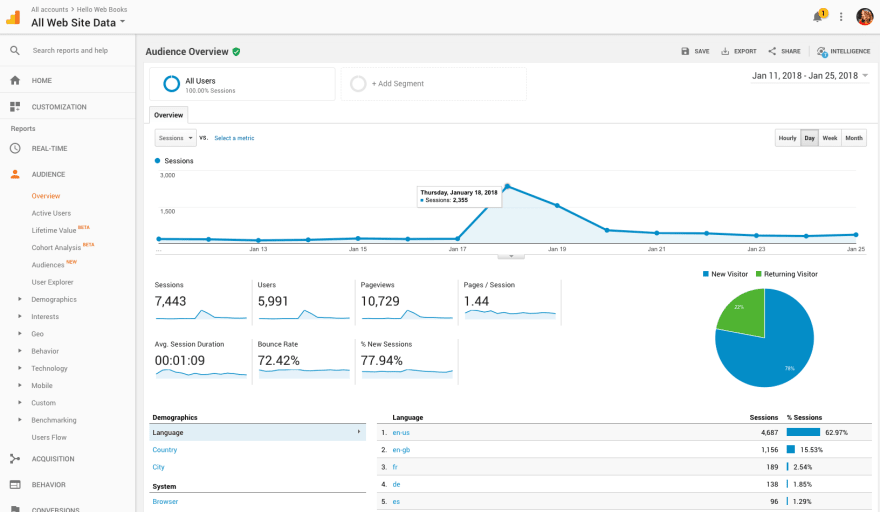 Before I wrote this post, I was disappointed in the amount of traffic, but after looking at my old post on launching on Product Hunt, I realized it was just about normal. Phew. 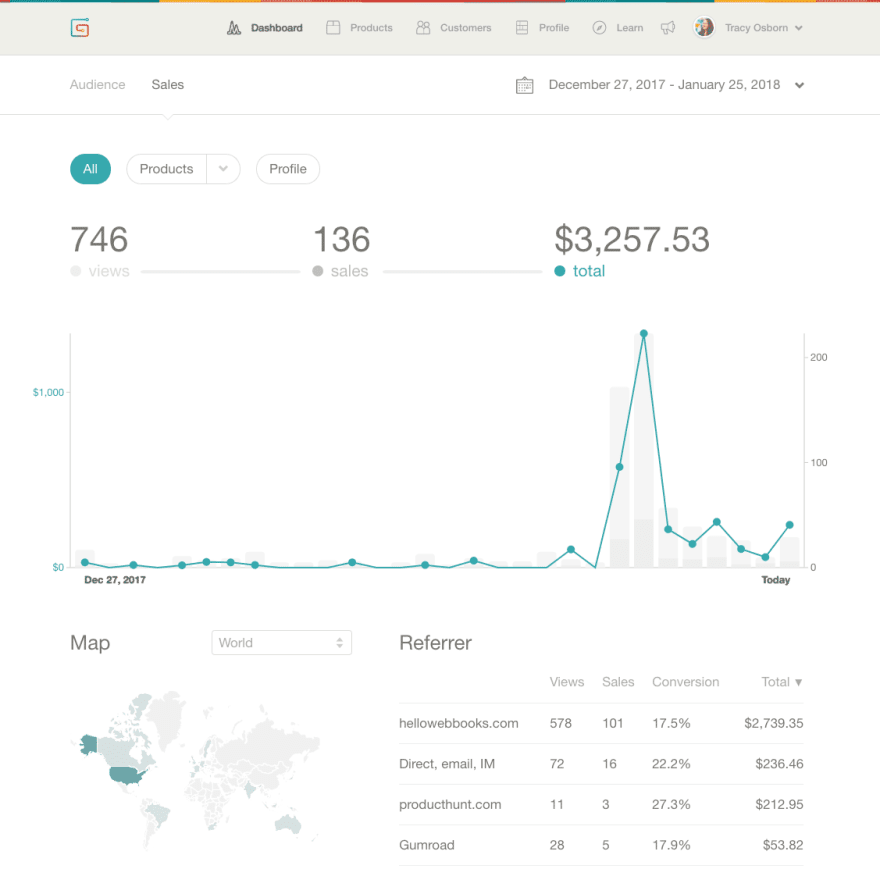 Made about $2,000 the first day, and kept up a bit of momentum afterwards.

The biggest surprise here is that I didn't sell as many video packages as I've done in the past for Product Hunt — the majority of the sales were for the paperback book. Not sure why. Maybe people have video/course fatigue? For Hello Web App, the majority of my sales was for the video product, and that listing didn't have photos (wasn't a feature then), whereas for the Hello Web Design listing, I had a ton of photos (gotta show off that gorgeous book, yo.) Who knows, but I found this interesting.

The back-end of Seller Central, where I sell the paperback books. 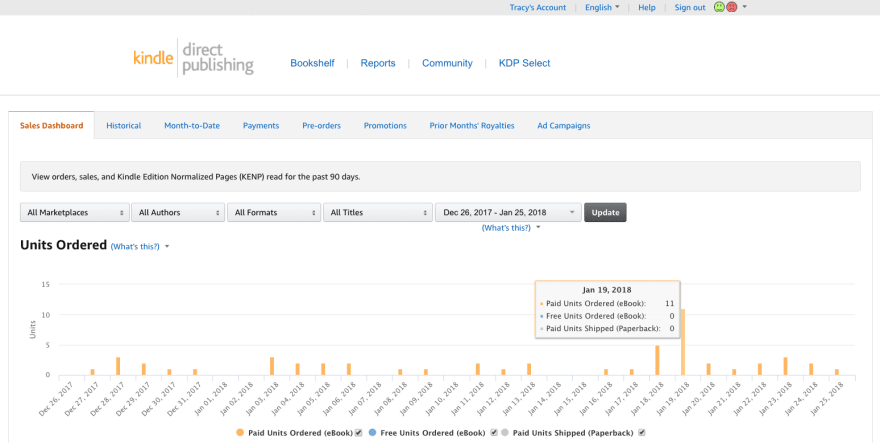 The back-end of Kindle Direct Publishing, where the Kindle sales are.

Even though I didn't link to them directly from my Product Hunt page, my other sales channels thhrough Amazon got a small boost.

Unfortunately since then, Amazon has "temporarily removed" my paperback listing as "a customer reported details don't match the product" and that they're "investigating." Sigh. This is why I hate dealing with Amazon.

I'm glad I was able to get a little chunk of money through the PH launch because it's tax season and I'm going to owe a few thousand dollars (yeehah, #entrepreneurshiplife.) This launch was pretty crucial so I could buffer my bank account a bit and I'm glad it did as well as it did.

Some takeaways from this experience:

And a quick run-down of my suggestions for anyone else preparing for their PH launch:

Any other questions? Ask me anything in the comments below!

Guidelines for AI-assisted Articles on DEV

Once suspended, tracymakes will not be able to comment or publish posts until their suspension is removed.

Once unsuspended, tracymakes will be able to comment and publish posts again.

Once unpublished, all posts by tracymakes will become hidden and only accessible to themselves.

If tracymakes is not suspended, they can still re-publish their posts from their dashboard.

Once unpublished, this post will become invisible to the public and only accessible to Tracy Osborn.

Thanks for keeping DEV Community 👩‍💻👨‍💻 safe. Here is what you can do to flag tracymakes:

Unflagging tracymakes will restore default visibility to their posts.