In this post we'll learn how to setup a basic local PHP development environment in Docker. We'll be using docker-compose and Dockerfile to achieve this. We'll use PHP, Apache, and Mysql. Setting up a comprehensive environment with things like task runners, composer, etc... will come in later tutorials.

Learn to code with our beginner friendly tutorials

If you just want the quick and dirty source code, then skip to the bottom. We're going to take this nice and slowly going step-by-step.

First step: Get a simple PHP script to run with Dockerfile.

If you take a look at the PHP Docker docs you won't see anything about a docker-compose file, but we can figure out how to do it with what they do give us. At the very beginning they give us a simple Dockerfile setup. Let's use that for our Dockerfile in the root of our project directory: I'm calling my project "php-docker". Then inside make a Dockerfile with this code:

This code is the setup to create the image we'll use. This setup pulls in PHP 7.4 with some command line stuff.

Then from inside the /usr/src/myapp folder we run the command $ php ./index.php where index.php is our script. So that means we need a PHP script. Let's create our index.php file inside the project directory like this:

Now we can continue with their instructions, which is to build and run the docker image:

The first command is going to build the image with the name "my-php-app" on your computer using the contents of the current directory. The second command prepares a container called "my-running-app based off the image we just created "my-php-app". We setup to run the index.php script, so our script runs in the command line. We should get something like this:

First step accomplished! But simple PHP scripts aren't very useful. Let's set this up on an Apache web server. If you scroll further down the documentation you'll see an "Image variants" section with one of them being php-apache. This image has Apache bundled with PHP. This will allow us to easily get our script running on a webserver and display the script results in a browser. Again, let's follow the directions. To run the Apache/php image WITHOUT a dockerfile, run this command: (Note the first line is for Linux/Mac users and the 2nd line is for the lonely Windows users

Note that Windows doesn't have a $PWD command, so I had to manually put my path for this to work.

Okay, so we setup to have our script run on port 80, so go ahead and visit http://localhost:80 and you should see your script running in the browser.

Now let's start moving stuff into a docker-compose file, but first let's stop that container we just created. You can run a docker ps to get the container id and then run $ docker stop container_id but I'm just going to stop all containers like this:

Now create a docker-compose.yml file in the root of your project and put the following inside:

The top line just sets the version number of docker-compose we're using. Then we have the "services" which is the list of containers to setup. We'll be giving this container the name of "php" so other containers can connect via that name. The "image" will be php:7.4-apache (even though our previous command line experiment used 7.2)

Now run docker-compose up -d from inside the project root and visit localhost:80 and see the script running n the browser. Because we're using volumes to stick our code in the container we should be able to change the script and have it update automatically. Give that a try.

Now let's shut down our container with docker-compose down.

The next step is to setup MySQL and Adminer (a DB access tool) Luckily their docs give us a docker-compose example so we don't have to think as much. We do need to modify the settings a tiny bit though because to connect PHP to MySQL we need to install a few missing pieces to our PHP environment. Here's what our docker-compose.yml file should look like now:

Our PHP service looks different because to connect PHP to the database using mysqli we need to install some mysqli stuff. That means we need to use a Dockerfile to customize our php7.4-apache image. So now we're using "build" to use the contents of the current directory (the dot) and using our Dockerfile to create the image. (Dockerfile image code below)

So now we've added a "db" service which is the mysql image. They use some weird command that has something to do with the password :-) and a restart policy. They also setup an environment variable which sets the root password to "example", so that's how we'll log in.

I know that's a lot of code to process.... So let's take it line-by-line. The first line uses the php:7.4-apache image to build the container. The second line runs a command to install the mysqli extension inside the container. From here we have everything we need to have a super basic PHP development environment. So let's run docker-compose up -d again.

Now we should be able access Adminer and log in. I'll just use a few images to speed things up. Just note that the name of the "server" is "db" in our case based on the dockerfile. We could have named it "pie" or anything we wanted. 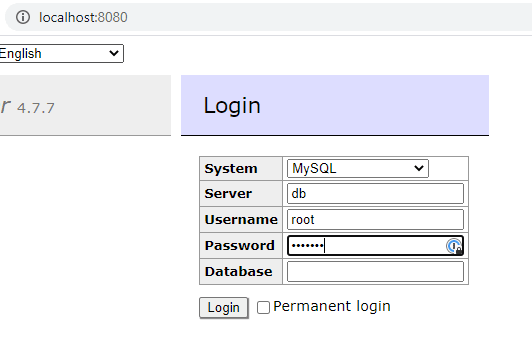 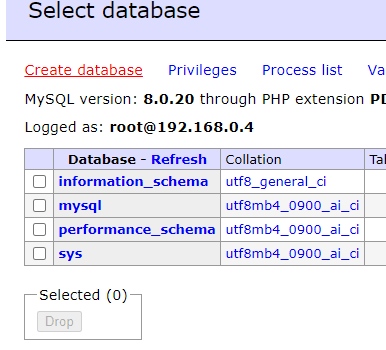 Name it and hit save. I named mine "company1"

Then select "new item" to add a few items to your table.

Now we just need the PHP to connect to our database. This isn't a PHP tutorial so I won't explain it all, but it just connects to our database and runs some queries and prints them on the screen. The important part is the third line that connects MySQL to PHP.

Now here is the result of our code when we run it in the browser. : 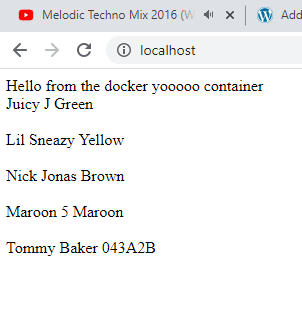 You're probably not going to build your entire app in one sitting so we'll want to use volumes for persistent data like the stuff inside your database. Without a volume your data will be erased every time you stop the containers. In order to do that you just need to add a few more lines to your code. The code from db: and down will look like this: (The important lines are at the end of the "db" section where it says volumes, and the VERY end where it says "volumes"

I won't go deep into volumes right now. (To be honest I'm no expert yet lol) but in this code we're setting up a volume on our system (managed by docker) called mysql-data. All our database tables and junk gets stored inside the "mysql-data". Then we map that data to /var/lib/mysql on the container.

So that's pretty much it y'all. If you want to get in some practice you should try to swap out MySQL for Postgres. Or Apache for Nginx, or try to install some other tools like Composer using the Dockerfile. Please let me know if the article helped or not. Would love some feedback so I can make these better.

Learn to code with our beginner friendly tutorials

truthseekers
Hey! I spend WAYYY too much time writing tutorials and learning all sorts of different developer technologies. I post all of them on my website so please check it out and subscribe.
+20.000 Developers Rename the Wireless Mouse to Hamster - Help Us!🐹
#beginners #tutorial #programming #productivity
Web Scraping With Java
#java #webscraping #javascript #beginners
Kubernetes: What It Is, How It Works, and Why It's A Game changer
#kubernetes #cloud #beginners #devops

Once suspended, truthseekers will not be able to comment or publish posts until their suspension is removed.

Once unsuspended, truthseekers will be able to comment and publish posts again.

Once unpublished, all posts by truthseekers will become hidden and only accessible to themselves.

If truthseekers is not suspended, they can still re-publish their posts from their dashboard.

Once unpublished, this post will become invisible to the public and only accessible to truthseekers.

Thanks for keeping DEV Community 👩‍💻👨‍💻 safe. Here is what you can do to flag truthseekers:

Unflagging truthseekers will restore default visibility to their posts.