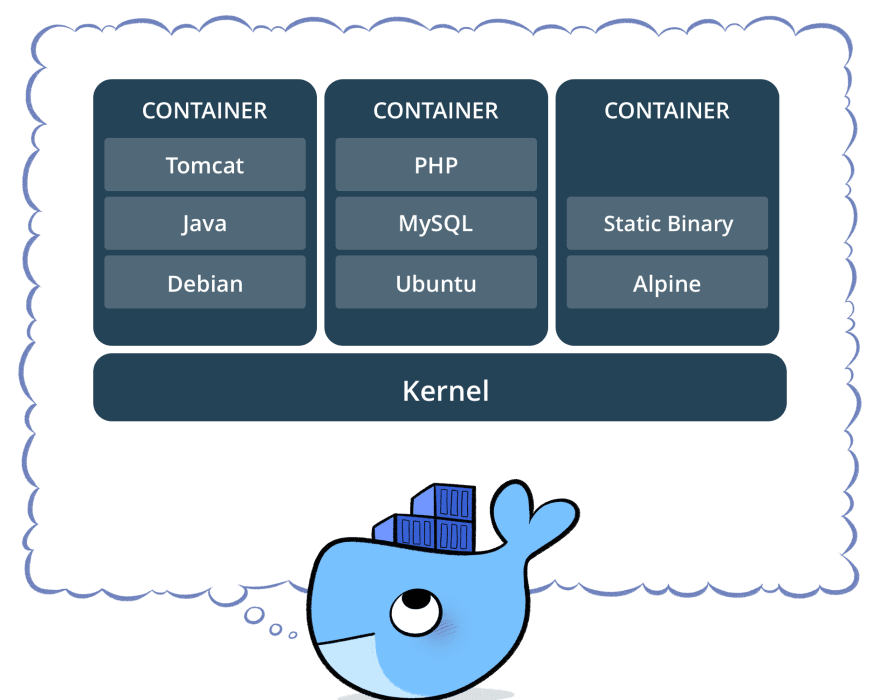 Containers are all about Software!
Traditionally we use the following process to run software:

You can learn a lot about containers by relating them to the process above. Here's what it looks like to run software with containers:

With traditional softwares, we are faced with many challenges, such as:

With Docker, we have just one place to go to get our software: Dockerhub.com. Here you can find any popular software repository that holds images you can download and use.

Dockerhub provides download stats and data on how many people likes a software. Softwares have documentation and other instructions on use. There is provision for comments too from images users.

Dockerhub has what's called Official Images that Docker Inc certifies. On the Tags page of these images you can find the result of security scans on these images, showing discovered vulnerabilities, if any.

DockerHub can be relied upon to provide access to our software images for download. No need to search the whole internet for a simple software.

DockerStore is a new way of accessing and paying for commercial images.

With Docker you no longer need to worry if software is cross-platform as you can run Linux containers on windows and vice-versa.

This is all taken care of in the Image for you. You can decide to peek into how the image was built by visiting Dockerhub page and inspecting the Dockerfile.

No more lengthy instructions on how to install a software. Just Docker Run.

The publicly available Dockerfile can be access to find out what exactly was installed in a container.

Docker remove command is used to uninstall software. As for updates, you can easily pull down an updated image. Images are tagged, making its update and versioning consistent and easier to understand and follow.

All other problems such as documentation, where its installed, starting service, stopping application, licensing, installing dependencies, and security, are equally taken care of by docker. Docker run starts all needed dependencies and performs all needed configs.

This used to be a huge one. An application update, operating system patch or upgrade of a shared library meant an end to a properly function software in the past. No more. Docker solves this as well.

Make sure your machine has support for virtualization. If you’re running a windows machine, ensure it has Hyper-V as this is the technology Docker leverages to function. You might have to turn-on the support in the machine’s BIOS.

Enter the following docker command into your terminal

If you’re running this for the first time, this will:

Attaching the “-rm” tag after the run, removes the container whenever it is done running.

Run the following to test:

Execute this in your terminal:

The -p flag specifies the port Docker should forward from the container it’ll launch to which port in your host machine.

This command pulls down Nginx server in layers. Since this comes in a compressed form to save bandwidth, docker then extracts them to save time in subsequent runs. Finally, docker starts the Nginx server and does the port forwarding.

A simple process like installation and configuration of Nginx server can take a considerable length of time, and require some level of expertise. With Docker, all you have to do is run a line of command and the process is set up. This is called Inverted Learning.

With Inverted learning one does not need to understand a technology to use it. With the Nginx example above, with just one line of code, you can have Nginx up and running, even without knowing how to set it up traditionally.

This enables people to preview/use software and decide if they want to invest the time to learn it, saving wasted time.

In a Windows parlance, an image can be likened to a downloaded software in say, .zip format. By extracting this software, we can access the ‘.msi’ or ‘.exe’ we can use to install our software. The same with docker. To download a software we use:

This downloads the file to our machine. If we do not specify a tag in our image identifier, the ‘latest’ tag is automatically used. I.e. .

docker looks for the specified image locally first, and on locating it, it’ll extract it, create a container and run the app image inside it.

A container is essentially a running instance of an image, the same way a running application is an instance of its installer file. Traditionally, we can’t install an application without its installer. In docker, when we execute the run command with an image name, docker first searches locally in our machine for the image, if not found, it proceeds to search Dockerhub. If the image is found, it’ll download, extract, install and run the image.

Just as we can close a running application, we can also terminate a running container with:

This doesn’t remove the container but merely stops its execution. To confirm this, you can use the command:

This shows you all your docker equivalent of installed applications, both running and terminated, with their running status specified.

If you want to ‘uninstall’ a container, you can use:

The container identifier can be the ID or name. The full ID doesn’t need to be supplied, just enough to uniquely identify the container is enough. The output of this command is an echo of the affected container(s). To remove all containers, consider using:

This echoes out all the affected container IDs. The additional -q flag ensures only the container IDs are supplied to the rm command.

Just as uninstalling a software in Windows doesn’t delete its downloaded installer, so also does removing a container doesn’t remove its image. To view all pulled images use:

To remove the image, you use:

The identifier can be the image ID or the repository name. Running this command spits out a lot of outputs. This is because an image is often layered and while removing them, each layer must be deleted for the images to go.

Containers take isolation to a whole new level, and understandably so.

Let us step back and examine a running application. A running software is made up of the following layer:

When an image is pulled down, it contains the needed files in the User space. This is to ensure the application has access to all libraries, components and dependencies it’ll need. This is what makes the image large most times as it attempts to err on the part of being over careful. And well, sometimes you never know what else an application might be needing, so why not have it all.

Since it’s the Kernel that has full access to the machine’s computing resources, the software makes all request through API calls to the Kernel. The Kernel is responsible for telling the running container all the processes, network or files that it can see. This isolation enable container to be more independent and to not compromise the host system. It’s basically the Kernel lying to containers in order to provide security to the host.

In docker, there are times when we need a container to interact with files in a host machine. This can be to process, access or output data. To achieve this, we use the Drive mounting feature of docker:

This command mounts the c:/users/folder to the container’s /data folder thanks to the -v (volume) flag. This way we can specify some extra command that can perform the desired operation.

Mounting is the process of adding a reference to a host filesystem for permission to access some host files.

You can get the docker docs for local reference with:

Thanks for your time!

Reasons NOT to use ESlint

Once suspended, udujoel will not be able to comment or publish posts until their suspension is removed.

Once unsuspended, udujoel will be able to comment and publish posts again.

Once unpublished, all posts by udujoel will become hidden and only accessible to themselves.

If udujoel is not suspended, they can still re-publish their posts from their dashboard.

Once unpublished, this post will become invisible to the public and only accessible to Juell.

Thanks for keeping DEV Community 👩‍💻👨‍💻 safe. Here is what you can do to flag udujoel:

Unflagging udujoel will restore default visibility to their posts.