If you are merging arrays with thousands of elements across, you can shave off seconds from the process by using arr1.push(...arr2) instead of arr1 = arr1.concat(arr2). If you really to go faster, you might even want to write your own implementation to merge arrays.

Recently, we had a user complaining of a major slowdown in the execution of their UI tests on UI-licious. Each I.click I.fill I.see command which usually takes ~1 second to complete (post-processing e.g. taking screenshots) now took over 40 seconds to complete , so test suites that usually completed under 20 minutes took hours instead and was severely limiting their deployment process.

It didn't take long for me to set up timers to narrow down out which part of the code was causing the slowdown, but I was pretty surprised when I found the culprit:

In order to allow tests to be written using simple commands like I.click("Login") instead of CSS or XPATH selectors I.click("#login-btn"), UI-licious works using dynamic code analysis to analyse the DOM tree to determine what and how to test your website based on semantics, accessibility attributes, and popular but non-standard patterns. The .concat operations was being used to flatten the DOM tree for analysis, but worked very poorly when the DOM tree was very large and very deep, which happened when our user recently pushed an update to their application that caused their pages to bloat significantly (that's another performance issue on their side, but it's another topic).

It took 6 seconds to merge 15,000 arrays that each had an average size of 5 elements with .concat.

That's not a lot data.

Why is it so slow? Are there faster ways to merge arrays?

So I started researching (by that, I mean googling) benchmarks for .concat compared to other methods to merge arrays in Javascript.

It turns out the fastest method to merge arrays is to use .push which accepts n arguments:

And it is faster by leaps in comparison.

I ran a few performance benchmarks on my own to see for myself. Lo and behold, here's the difference on Chrome:

To merge arrays of size 10 for 10,000 times, .concat performs at 0.40 ops/sec, while .push performs at 378 ops/sec. push is 945x faster than concat! This difference might not be linear, but it is already is already significant at this small scale.

And on Firefox, here's the results:

This one change to our code fixed the entire slowdown problem.

Here's the the results on Chrome along with results:

.push is still faster than .concat, but a factor of 9.

Not as dramatic as 945x slower, but still dang slow.

If you find Array.prototype.push.apply(arr1, arr2) verbose, you can use a simple variant using the rest spread ES6 syntax:

The performance difference between Array.prototype.push.apply(arr1, arr2) and arr1.push(...arr2) is negligable.

But why is Array.concat so slow?

It lot of it has to do with the Javascript engine, but I don't know the exact answer, so I asked my buddy @picocreator , the co-creator of GPU.js, as he had spent a fair bit of time digging around the V8 source code before. @picocreator 's also lent me his sweet gaming PC which he used to benchmark GPU.js to run the JsPerf tests because my MacBook didn't have the memory to even perform .concat with two size-50000 arrays.

Apparently the answer has a lot to do with the fact that .concat creates a new array while .push modifies the first array. The additional work .concat does to add the elements from the first array to the returned array is the main reason for the slowdown.

Me: "What? Really? That's it? But by that much? No way!"
@picocreator : "Serious, just try writing some naive implementations of .concat vs .push then!"

So I tried writing some naive implementations of .concat and .push. Several in fact, plus a comparison with lodash's _.concat: 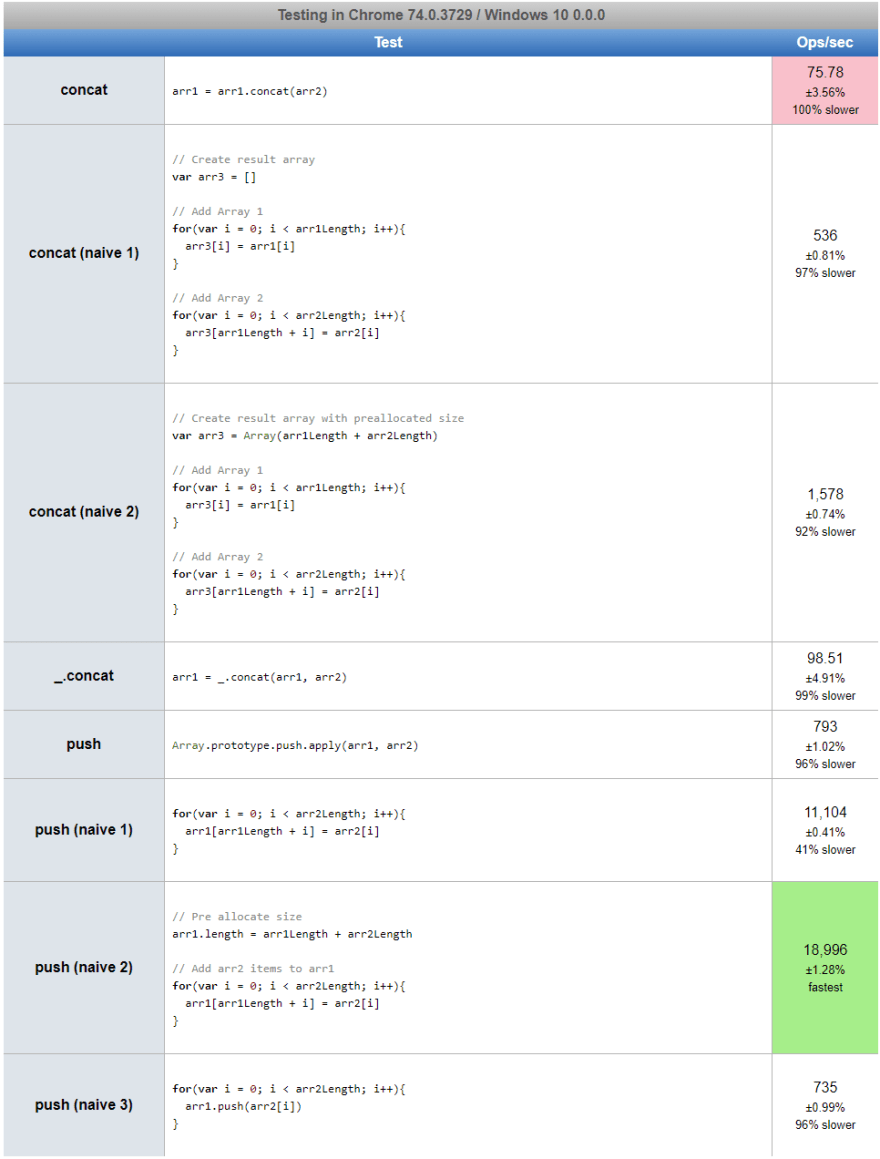 Let's talk about the first set of naive implementation:

As you can see, the only difference between the two is that the .push implementation modifies the first array directly.

It turns that my DIY concat and push is faster than the vanilla implementations... But here we can see that simply creating a new result array and copying the content of the first array over slows down the process significantly.

We can further improve the naive implementations by preallocating the size of the array before adding the elements, and this makes a huge difference.

Naive implementation of .concat with pre-allocation

Naive implementation of .push with pre-allocation

Preallocating the size of the final array improves the performance by 2-3 times for each method.

Ok, what if we just .push elements individually? Is that faster than Array.prototype.push.apply(arr1, arr2)

Conclusion: Why .push is faster .concat

In conclusion, it is true that the main reason why concat is so much slower than .push is simply that it creates a new array and does the additional work to copy the first array over.

That said, now there's another mystery to me...

We took a look at lodash's _.concat implementation for some hints as to what else is vanilla .concat doing under the hood, as it is comparable in performance (lodash's is slightly faster).

It turns out that because according to the vanilla's .concat's specs, the method is overloaded, and supports two signatures:

Lodash also handles both overloaded signatures, and to do so, lodash puts all the arguments into an array, and flattens it. It make sense if you are passing in several arrays as arguments. But when passed an array to append, it doesn't just use the array as it is, it copies that into another array, and then flattens it.

Definitely could be more optimised. And this is why you might want to DIY your own merge array implementation.

Also, it's just my and @picocreator 's theory of how vanilla .concat works under the hood based on Lodash's source code and his slightly outdated knowledge of the V8 source code.

You can read the lodash's source code at your leisure here.

Why are we doing such large array operations during UI-licious tests anyway?

Under the hood, the UI-licious test engine scans the DOM tree of the target application, evaluating the semantics, accessible attributes and other common patterns to determine what is the target element and how to test it.

This is so that we can make sure tests can be written as simple as this:

Without the use of CSS or XPATH selectors, so that the tests can be more readable, less sensitive to changes in the UI, and easier to maintain.

Unfortunately, there's a trend of DOM trees growing excessively large these days because people are building more and more complex and dynamic applications with modern front-end frameworks. It's a double-edge sword, frameworks allow us to develop faster, folks often forget how much bloat frameworks add. I sometimes cringe at the number of elements that are just there to wrap other elements when inspecting the source code of various websites.

If you want to find out whether your website has too many DOM nodes, you can run a Lighthouse audit. 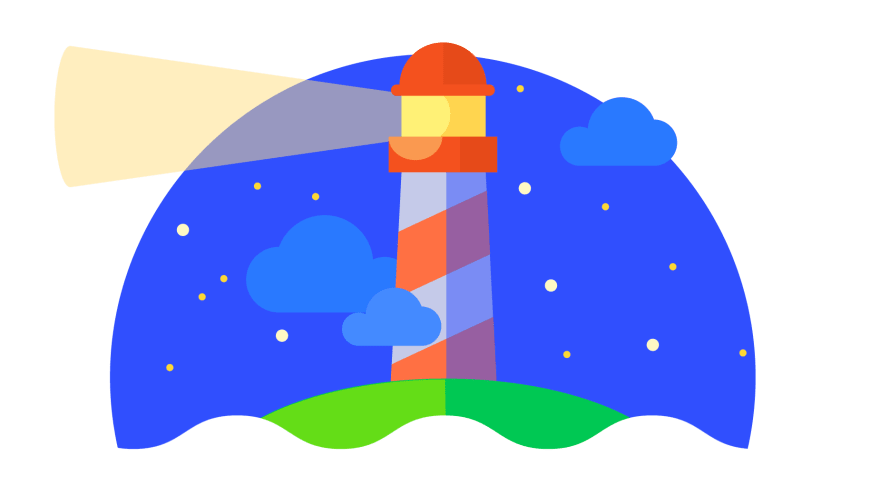 According to Google, the optimal DOM tree is:

A quick audit on the Dev.to feed shows that the DOM tree size is pretty good:

The Death of IE (webcomic)

Convert your website into an android app using capacitor 😱.

How to use async function in useEffect?