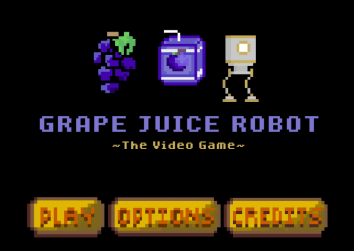 Grape Juice Robot features a boy named Tilson and his robot friend who has a fatal juice addiction. Unfortunately, Tilson gives his robot friend juice and this causes a deathly malfunction. The robot friend has been disassembled and his parts have been scattered around a realm with slime creatures, goblins, and chickens. Tilson must explore the realm and find his robot friend’s remains to rebuild him.

Tilson uses the same juice box that killed his robot friend as a weapon. With the deadly droplets of juice, Tilson uses his juice box to fend off slimes and goblins.

They may be fun to watch as they bounce around, and look rather harmless, however, they are a little more interesting than you think. Just like the ghosts in Pac-man, there are a few slime variants that make each one behave differently.

White: Jumping into the stratosphere

The goblins carry a variety of items that can be thrown at you. These items are mostly junk, however, players BEWARE because goblins can throw explosive bombs that do quite some damage!

Players also have the ability to shoot junk items in mid-air. 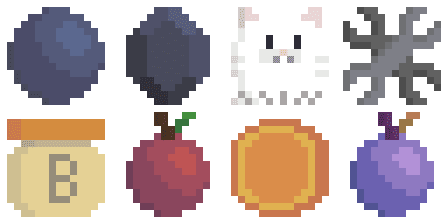 They all take a different form yet in Grape Juice Robot, a rock does the same damage as an apple, cat, grape, etc.

Chickens are absolutely harmless and novel, yet they add so much to the game.

Explore what you can do with chickens — ask questions such as:

Be creative and enjoy a game with chickens! 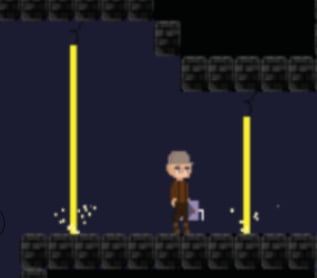 They don’t kill you immediately but they can definitely kill Tilson, lasers are quite the challenge when they appear in a series.

Lasers may also act as a barrier when slimes/bombs/junk try to deal damage. This is also true for juice droplets.

The pools of acidic slime are quite deadly and can be detrimental when there are no platforms nearby. Despite so, once you have landed in a pool, there’s still a chance to survive— jump out.

Crates can be beneficial when there are multiple enemies bunched together. Slimes must jump over crates to hit you, and goblins cannot pass the crates.

Tilson however, is tall enough where he can fire juice droplets from behind the crate.

Unfortunately, because this game was made during a game jam, we did not have enough time to have a coherent ending. The original idea was to have Tilson collect and rebuild his robot friend, however, due to his fatal juice addiction, he reverts back to his juice-loathing self and only seeks self-destruction.

The game currently loops as described, however, there isn’t a solid narrative to show the devasted Tilson as well as the rush of frustration.

The theme of the 2021 Global Game Jam was “Lost and Found.” The core message behind Grape Juice Robot was replacement. Things that once had great use, performed excellently, and looked awesome will eventually wear out. When people lose these things, there might be a feeling of “ nothing will ever match up to the one I had before”. As much as I want to believe this, this isn’t always the case.

Personally, I always had a favorite toothbrush that I just couldn’t throw away. It was battery-operated, had nice bristles, and a large minion was printed on the front. One day after coming back from camping, I forgot to bring it home and I wanted it back so bad. Fortunately for me, I realized how gross and worn out it was and not to mention very unhygienic! Bottom line is, sometimes losing things and being forced to replace them is actually a great thing and can even lead to new favorites.

I usually only write about games, however this time there is one to play as well! Feel free to play Grape Juice Robot.

**note: I was not a programmer on this project, however, I wanted to write about this amazing game that I was part of.

Grape Juice Robot
*Installation Instructions: Download the files and unzip. Then double click the .exe file in the release folder to run…*globalgamejam.org