Why build a tweeting bot?

It all started with a fleeting idea and a tweet. Wait, don't all projects start this way?

So, with 80% of respondents giving a positive reaction to the idea, I started to plan the project.

I started thinking about the goals, why I was building it, and how it could have a big picture impact. So, here's the main goal:

Have fun & meet other devs while learning and helping each other learn.

There is a secondary piece. I want to make it easy for people to take their first steps into open source contributions. I included a section on contributing in the readme.md. This should make it a bit easier for someone new to contributing on GitHub.

Vicki wrote this about Building the Code Question Bot

Have fun & meet other devs while learning and helping each other learn. 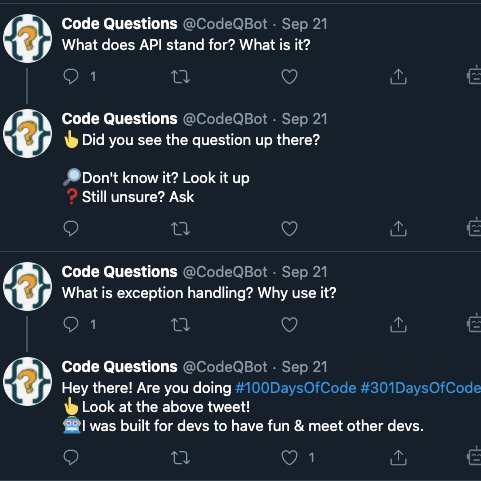 If you would like to contribute, feel free to make a pull request.

First time? I suggest starting with adding a question to questions.py. Check out issue #5 for more details.

If you need more of a step-by-step, skim through this article about making your first contribution.

This project is intended to be a safe, welcoming space for collaboration, and contributors are expected to adhere to the Contributor Covenant code of conduct.

All contributions are greatly appreciated.

The bot was to be built with Python and Tweepy.
Previously, I made the Vets Who Code Bot. So, I already had some experience with Tweepy.

This bot was a little different because I was looking to update_status. I spent a lot of time trying to figure out how to do this and made it out like it was going to be super complex. It turned out to be a rather tiny piece of code that actually does the work.

Yup, that's pretty much it. There are a few other lines and some importing files to other files, but that's the statement that does the job.