Redux is probably the most popular global state management library for react by far. It eliminates the problem of prop-drilling and lets us manage the application state in a scalable way.

That’s enough introduction, now lets set it up in a react project!

Note: This article assumes that you understand the basics of redux. If not, please consider checking the redux documentation before moving forward.

What is the goal of this blog?

To understand and set up a classic counter example using redux with CRA.

A bonus section awaits you at the end!

You can clone the final result of this blog from here.

Type the above command in your terminal / command prompt. Before this make sure that you have the latest version of node installed in your machine.

here, my-react-redux-app is the name of the project folder.

Now change the directory (cd) to my-react-redux-app and then start (npm start) the server by typing it in your terminal / command prompt.

And voila! the react project is now setup. You should be able to see a screen similar to the following in your browser: 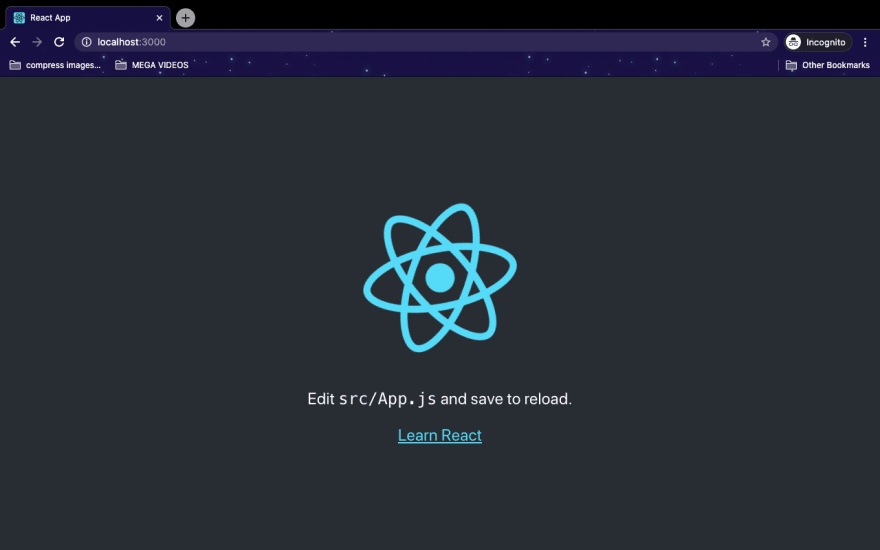 Now that we have installed the packages, we can proceed with the setup.

react-redux lets us connect redux with our react application easily.

here, we have imported something called ‘‘Provider’’ from react-redux.

‘‘Provider’’ is a component provided to us by the react-redux library. It wraps around our component. As you can see it also takes a prop called store (which is our redux store).

Before moving ahead, just for the sake of keeping our project structure organized, we will create a folder named redux in our src folder, and all of our redux specific code/logic will be inside this folder. This way we are making our project easy to read, test and scalable when the need arises.

here, we use the createStore() function from redux, to create a store! (well that explanation was a bit redundant 😜 as the name itself is quiet self-explanatory). We can see that we have also imported a file called rootReducer, which we haven't created yet, so let's do that now,

create a file named rootReducer inside the same directory as the store (i.e. path — ./src/redux/rootReducer.js)

here, combineReducers() as the name suggests combines various reducers into a single reducer. In redux, we can create as many reducers as we want. It is ideal to create a new reducer for every operation that doesn't depend on any other action. Since the createStore() in store.js can take only one reducer, hence combineReducer() is used to convert multiple reducers into one.

With this, we have successfully created our rootReducer, but we can see that we have imported a file called counterReducer which again we haven't created yet😗. I know, I know it is a bit tedious but trust me and hang in there! You just have to do this once while setting up redux. Once the setup is done, it is a very smooth experience from there onwards.

counterReducer is the reducer function for the counter example that we talked of at the start. From the next step onwards we will start implementing our counter example.

the file names are pretty self-explanatory of what they signify. (let me know if you have any confusion with this, in the comments section below)

let's create our types for the counter first. We will be needing two types, one for incrementing the counter and the other for decrementing.

here, we export both the constants, so that they can be imported in other files.

Next, let's create actions for the counter.

here, we import our types from counter.types.js file and pass them as types in their respective actions.

Now, let's create the reducer for our counter example.

here, firstly we import our types at the top. then we declare a constant called INITIAL_STATE this is going to be the default state for this specific reducer. After this, we create a function called reducer which takes two arguments — state, action. The State takes an initial value of INITIAL_STATE, and action receives any data (payload) that is passed from our action creator from counter.actions.js file.

Inside the reducer function, we use a switch-case from javascript and inside each case, we return the updated state. We use the spread operator (…) to copy the state into our new object and then add what we want to change in the state.

⚠️ Always remember: We never mutate the original state! Every time we have to make a change we return a new state object.

And in the end, we export our reducer, which is then imported in the _rootReducer.js _file.

With this, our reducer for the counter is ready! From the next step onwards we will write some JSX to display the increment and decrement buttons on our web app.

To demonstrate the use of redux in our web app we will have to show something on our web app. So we will be writing some basic JSX and then afterward we will connect it with our redux store.

Replace the existing boilerplate code with the following in your App.js

here, we have just added two buttons that do nothing at the moment and we display a static count value.

Now, let's connect the redux state and actions to this component in the next step.

Now that everything else is set up, the final step is to use the redux state and actions in our component.

here, we import the connect function from the react-redux library, we also import our increaseCounter and decreaseCounter actions.

The connect function is a Higher Order Component (HOC), it basically takes a component and adds some more props to it and then returns the same component with newly added props. Check the last line of App.js file where we export the component, we can see that connect is being used here as follows,

connect takes two functions as arguments which are mapStateToProps and mapDispatchToProps.

Now let's see what these two functions do,

mapStateToProps function as the name suggests maps the redux state to the props of the component it is declared in. So this basically adds whatever state you return from this function to your component. In our counter example, I have returned count from the redux state and hence now I can access count from props inside my App component.

mapDispatchToProps function does a very similar thing, but instead of adding state to props, it adds our actions to props! Whatever actions we return from this function are added to our component. And as you can see that in our example I have returned two actions i.e increaseCounter and decreaseCounter, hence we are able to access them from our props and then I release our actions on the respective button click.

With this now we have a fully functional react-redux app! If you liked the blog or have any queries, please let me know in the comments!

BONUS: Adding redux-dev-tools to the project

Second, install the redux dev tools package from npm to your project, using the following command,

Third, update your store.js to use the composeWithDevtools as follows,

and that's it! Now you can access chrome dev tools for redux!

The chrome dev tools for redux looks something like this: 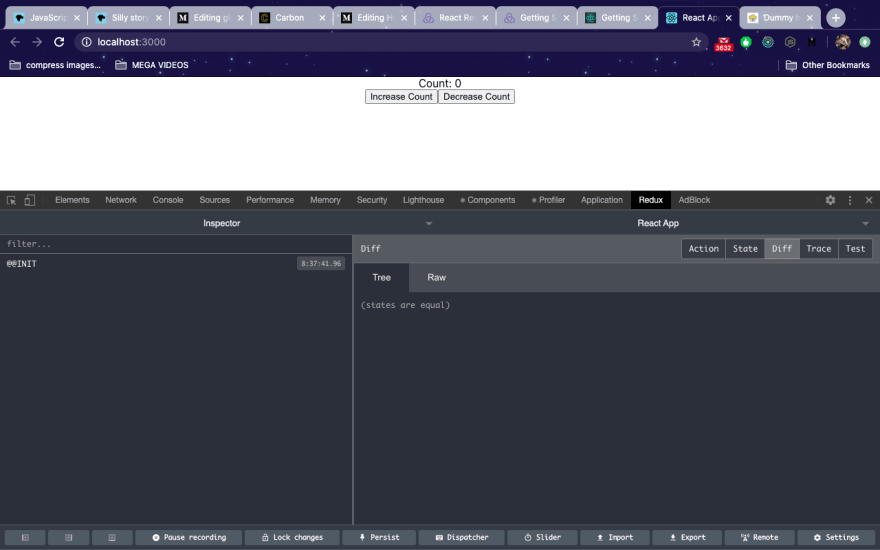 You can clone the final result of this blog from here.

Thank you for reading the article! I hope it added some value 😊.
You can follow me on twitter to get updates as soon as I post a new article or just tweet me your thoughts! Seeya!

The irony is, I am a web developer but I am shit scared of spiders. Javascript && React ⚛️

Vikrant Bhat
The irony is, I am a web developer but I am shit scared of spiders. Javascript && React ⚛️
What is Deno? Is it gonna replace Node?
#deno #javascript #webdev #tutorial