Motions aren't just for moving. They can be used in combination with a series of commands called operators to edit your code at the speed of lightning.

You can use operators and motions together by following any of these patterns: 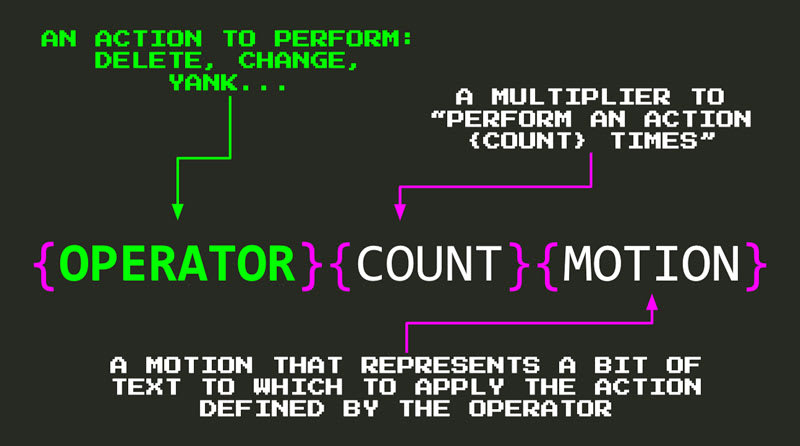 For instance, the d2w combination allows you to delete two words 1.

d corresponds to the delete operator. Since d is an operator, you can follow the {operator}{count}{motion} formula and combine it with all the motions you've learned thus far: 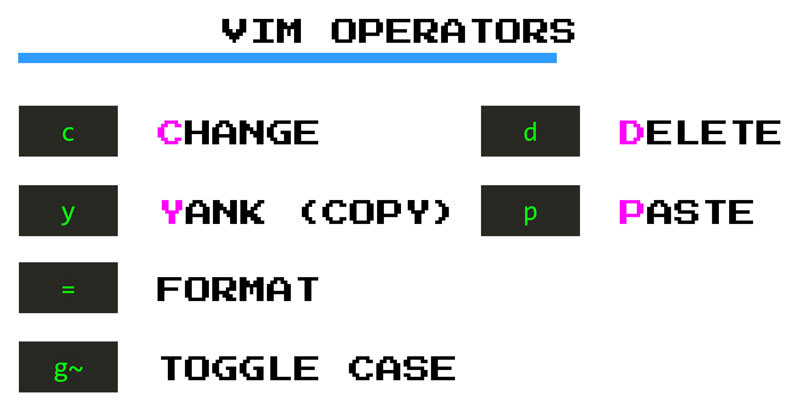 In addition to d, there's a handful more of handy operators:

You can use these operators much like you used delete so that:

All these operators provide additional shorthand syntax aimed at saving you typing and increasing your speed with common editing tasks:

Noticed How Command Keys Make a Lot of Sense?

Operators, motions and other commands in Vim are generally easy to learn because they make sense and are easy to guess. Want to change something? You probably want to use the c (change) operator. Want to move word by word? Try w (word). Want to delete something? Try the d (delete) operator and so on.

Operators really shine when we combine them with a special class of motions called text-objects.

Taking Editing Up a Notch With Text Objects

Text objects are structured pieces of text or, if you will, the entities of a document domain model. What is a document composed of? Words, sentences, quoted text, paragraphs, blocks, (HTML) tags, etc. These are text objects. 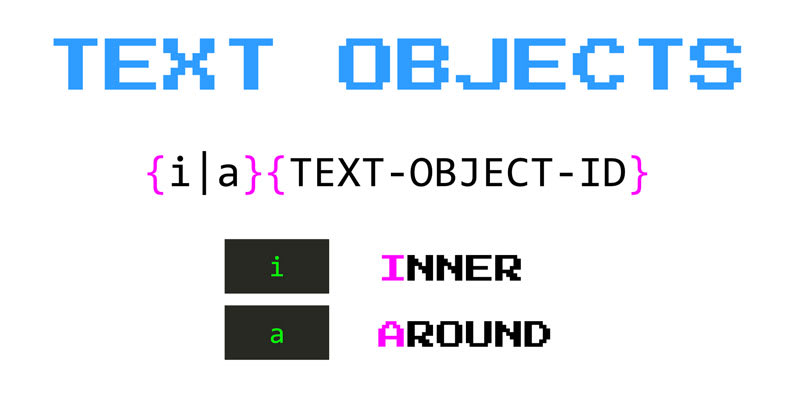 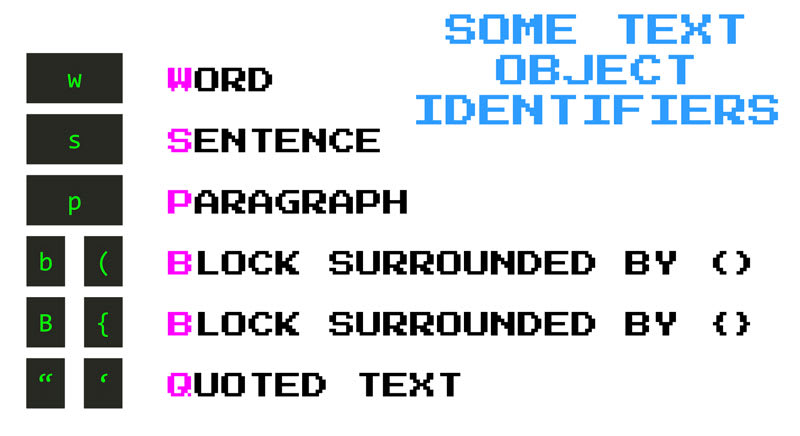 So in order to delete different bits of text you could any of the following commands:

Combining text objects with operators is extremely powerful and you'll find yourself relying on them very frequently. Stuff like cit, ci" and cib is just brilliant.

Let's say that we want to change the contents of this string below for something else:

You type ci'Hi!<ESC> and it becomes:

Just like that. You don't need to go grab the mouse, select the text and then write something else. You type three letters and Boom! You're done.

Noticed How Most Vim Keys Are Placed Near Your Fingers?

The fact that Vim has modes allows keys near the home row to be reused in each separate mode. This design decision minimizes the need for slow and contorted key combinations, and heightens your speed and the longevity of your fingers and wrists. This is awesome!

Repeating The Last Change with The Dot Operator

Vim has yet another trick in store for you aimed at saving more keystrokes: The magic . (dot) command.

The . command allows you to repeat the last change you made. Imagine that you run dd to delete a line of code. And now let's say that you've warmed up to removing code. Removing code is good, the less code you have the less code you need to maintain. So let's remove another line of code. How would you go about that? You could type dd again but, even better, you could use the . command which is just a single keystroke.

OK. You save one keystroke. So What. (Tough crowd here I see). Well, you can use the . command to repeat any type of change, not just a single shorthand command like dd. For instance, you could change a word for Awesome like so cawAwesome<Enter>, and then repeat that whole command with all those keystrokes by just typing a single dot. Think of the possibilities!

The . command becomes even more useful if you get in the habit of using Text-objects. Text-objects are more reliable than other motions because you don't need to care as much where the cursor is positioned. Thus, commands with text objects are far more repeatable and therefore work beautifully in tandem with the . command.

The . command works great in combination with the repeat search commands (;, ,, n or N). Imagine that you want to delete all occurrences of cucumber. A possible approach would be to search for cucumber /cucumber, delete it with daw and, from then on, use n to go to the next match and . to delete it! Two keystrokes!?! Again think of the possibilities!!

In addition to the operators you've learned in this chapter, Vim offers a series of shortcuts to operate on single characters that can be useful on occasion. They are:

As usual, all of the above support counts to operate on multiple characters at once.

Sooner or later it will come a time when you will make a mistake. Admit it! You ain't perfect. Nobody is. And that is alright. You needn't worry though, because Vim has your back:

Motions aren't just for moving. Used in combination with operators they let you perform operations on text with ease and amazing speed. You apply an operator on a motion by using the key melody {operator}{motion}.

Some of the most useful and common operators are: d for delete, c for change, y for yank (copy) and p for put (paste). As you can appreciate from these operators and the motions you've learned thus far, Vim commands are generally easy to learn because they make sense and are easy to guess.

When you double an operator you make it operate on a line. For instance, you can use dd to delete a complete line. In a similar fashion, when you capitalize a command it performs a stronger (or alternate) version of the original command. For example, D deletes from the cursor to the end of a line. These are really helpful and can save you a lot of time. Learn to use them instead of their more wordy alternatives.

Counts also work with operators. You can multiply the effect of an operator motion combo by using a count like this: {operator}{count}{motion}.

Text objects are special motions that describe the parts of a document: words, sentences, paragraphs, and such. They are incredibly useful in combination with Vim operators. Using operators with text-objects you can be very precise and command Vim to delete a word, or change the insides of a string or code block.

Text objects offers two variants: the a (think a or all) and i (think inner) that allow you to operate on a text object plus surrounding whitespace or only on the inner parts of a text object respectively. For example, using da" deletes a complete quote including trailing whitespace, using di" only deletes whatever is surrounded by quotes.

The dot command . lets you repeat the last change and, as such, it is one of the most useful repeater commands. Operations on text-objects are great candidates for the dot operator because they are more repeatable.

A great way to take advantage of the dot command is by using it in combination with searches. When you do that you can apply changes of successive searches with just two keystrokes: n or ; to find the next match and . to repeat the last change.

Sometimes you'll make a mistake. When that happens, you can undo the last change with the u command. If you change your mind or undo too far, type CTRL-R to redo.

Github New : View your contributions in 3D, VR and IRL!

How to Add the Symbol Palette to an Angular Diagram Component