This is a chapter Moving Blazingly Fast with The Core Vim Motions from the book Boosting Your Coding Fu with VSCode and Vim.

Motions (as in movements) are how you move around in Vim. They are commands that when typed move the cursor around with high speed and precision. There are many of them, and each one is best suited for different types and lengths of movement. I find they work great in tandem with Visual Studio Code native Go To features like Go To File and Go To Symbol.

Here's a condensed list of the most useful ones, and when and how to use them:

Word motions let you jump from word to word in either direction (from left to right or right to left). As such, they allow you to move faster than the basic horizontal motions h and l.

You can use the w (word) command to jump to the beginning of the next word like so:

Learn Commands With The Help of Mnemonics

Vim has a humongous amount of commands. In time, when you become an experienced Vim user, the commands will become second nature, reflexive and automatic. At the beginning though, you'll need to learn them one by one.

Following this technique, you'll find that you can learn and recall a lot of commands with little effort.

So w, b, e and ge let you move word by word in Vim. But what is a word exactly? A word in Vim is either:

But Vim also has the concept of special kinds of words (with letters, digits and numbers) that also include special characters like ., (, {, etc. They are called WORDs in Vim jargon: 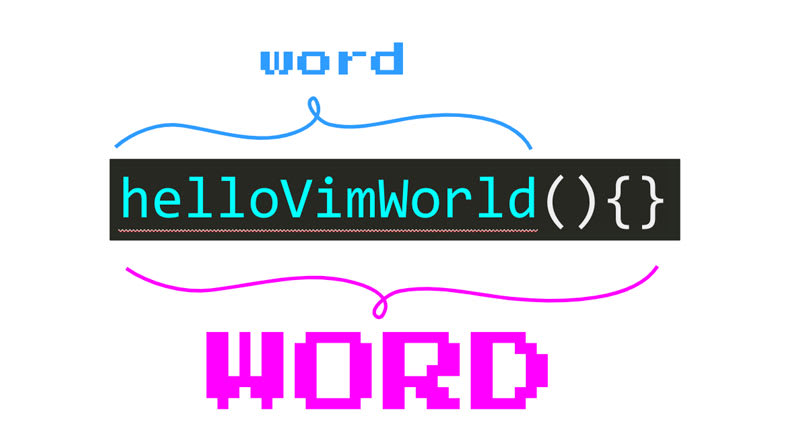 WORDs are particularly helpful to us programmers because code often has a lot of them:

If you want to move WORD by WORD you can use the capitalized equivalents of the motions described earlier (W, B, E, gE).

Move To A Specific Character

We can clearly see how f is faster and more precise than using word motions by pitching one against the other in an example:

If the different between the f and t commands isn't quite clear yet, here's an example that compares both of them:

t is really useful when you combine motions with operators to perform text changes as you'll soon discover (for instance, you could delete everything until ( and change it for something else).

After using f{character} you can type ; to go to the next occurrence of the character or , to go to the previous one. You can see the ; and , as commands for repeating the last character search. This is nice because it saves you from typing the same search over and over again:

On Notes, Melodies And Chords

Vim is quite special. If you have used other editors you're probably accustomed to typing chords of keys. That is, typing a combination of keys at the same time. For instance, CTRL-C to copy and CTRL-V to paste. Although Vim is no stranger to chords, it relies even more on melodies of keys.

A melody is a series of notes played one after the other. If you think of keys as notes, then melodies of keys are keys that are pressed one after the other in rapid succession. So, when you read that you need to type f{character} to find a character in a line, it means that first you type f, and then you type the character {character}. These two keys are, thus, played as a melody.

Using melodies of keys is the most common way in which you interact with Vim. And, although unfamiliar and kind of strange, it is very convenient because controlling the editor suddenly feels like you're just typing text. It is also marvellous for your wrists' health because you no longer need to rely of complex and unnatural key combinations that strain your poor joints1.

To move extremely horizontally use:

Starting from k and j, we move on to a faster way of maneuvering vertically with:

None of these are my favorites but they'll do for the time being. In the custom mappings chapter, you'll learn how to create a custom key binding for the ultimate mid-range vertical motion.

To move vertically even faster when you have a target in mind, your best option is to search for that target with the /{pattern} and ?{pattern} commands:

Where the {pattern} fragment will often be a string literal (the name of a method, class or variable) but can also be a regular expression.

If you're near your computer try typing a search command right now. You'll discover that, as you type a search command, any bit of text within a file that matches your pattern is highlighted. As you continue typing the pattern, the highlighted areas will be updated and reflect the new matches. When you find what you are looking for, type <Enter> and your cursor will jump to the first match in the document. There you can perform some editing if you want and later use n to jump to the next match (or N for the previous one). You can think of n as repeating a search.

For some reason unbeknownst to me, highlighted search isn't enabled by default in VSCodeVim. To remedy that, go to Preferences and enable the Vim: Hlsearch option (or, alternatively, use the vim.hlsearch option in the json version of the configuration).

Vim loves saving you time: Type /<Enter> or ?<Enter> anytime to run the last search (forwards or backwards). Or use * to do a search for the word under the cursor (# to do the same backwards).

Counts are numbers which let you multiply the effect of a command. You can use them by prefixing any command with a count like so:

In general, use {count}{motion} to multiply a motion {count} times.

A great way to move vertically within Vim is by using counts in combination with the j and k motions. But sometimes it can be hard to know how many lines you need to jump to get to the desired position. That's where relative line numbers can come in quite handy.

You can enable relative line numbers in VSCode by going to Preferences (Remember! Use the command palette with CMD-SHIFT-P or CTRL-SHIFT-P), searching for the line numbers configuration and setting it to relative.

In addition to the previous motions which don't really take into account the meaning of your code, Vim offers additional bindings that take your code semantics into consideration:

And Some More Nifty Core Motions

These are yet more motions that can come in handy from time to time:

Motions are commands that let you move around in Vim with high speed and precision. They are composed of one or more keys typed as melodies. They let you perform different types of movements with various lengths and degrees of precision.

The most basic ones are hjkl with are great for small corrections. Then we have word and paragraph motions (w, {) that are nice for browsing code faster. After those, we have high precision search-like motions (f, /) that let us quickly teleport to a character or a search pattern.

Find character and search motions have repeaters (n, ;) that let us repeat the last search by typing just one character. We can use them to jump from match to match in either direction very quickly. The concept of repeaters is a common theme in Vim and you'll learn many of them throughout the book. Train yourself to rely on repeaters, and you'll become the more effective for it.

You can combine counts with motions for greater effect. Our brains are slow at counting so you should limit the use of counts only to short jumps. When using counts with vertical motions it is nice to enable relative numbers because they give you a clear reference to your target. Consider enabling relative numbers if you haven't already.

Now let's move onto another foundational block in Vim that will allow you to edit text like if by art of magic: Operators.