The blog is about how to build some custom python libraries and store them as private artifacts in the Azure DevOps using Pipelines.

Working as a Data Scientist and Cloud Solutions Architect in my startup CortexBCI, I had the responsibility to host and publish our Wisdom PythonSDK for Brain Controlled Interface application development. This was the first motivation for me to write the blog to simplify the process of hosting python packages in Azure DevOps for other developers. I read through several documentations and blogs for the same but the one which helped me a lot was the blog written by Herald Gjura, App Dev Manager, Microsoft. The blog I have written is heavily inspired from him. I have adopted VSCode as my primary IDE for coding and also new changes in Azure DevOps version.

Azure DevOps provides developer services for support teams to plan work, collaborate on code development, and build and deploy applications. Azure DevOps supports a culture and set of processes that bring developers and project managers and contributors together to complete software development. It allows organizations to create and improve products at a faster pace than they can with traditional software development approaches. 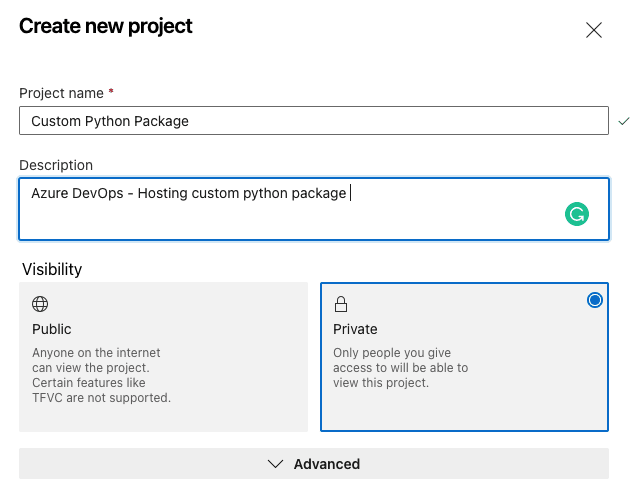 You can use any version control and code-hosting services like GitHub or simply create a repo in Azure Repos in DevOps Project we had created. In my case, I am going to create a repo in GitHub 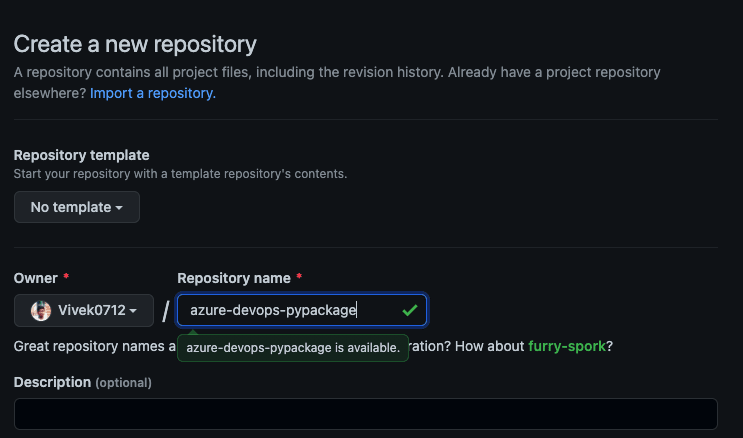 Coding and Testing your Python Packages 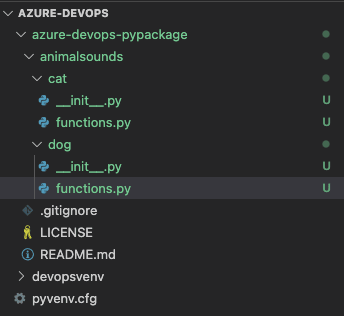 Inside each __init__.py, write

At the package level animalsounds, add a new folder called tests. In that folder add an empty init.py file.

In the tests folder, add a python file called, test_ functions.py. Note: it is very important to prefix all your test files with “test_”, it will be used by the CI framework to identify the unit test files it needs to run.

Inside the test_functions.py file add the following:

To run the unit tests, use the following command

Getting ready to deploy the Python package

There are a few additional files we will need to add. At the root (application level) add the following files: 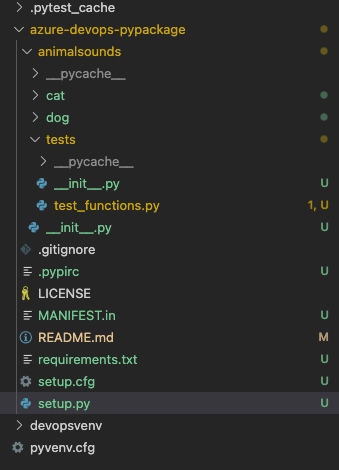 Let's start with creating a new feed for our pipeline. Go to Azure DevOps > Artifacts > Create New feed. Give a suitable name and keep a note of the same as we gonna need it later. 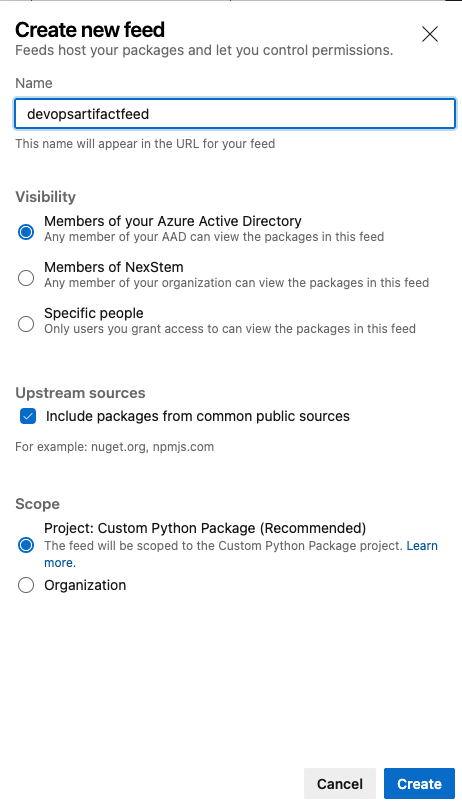 Under Pipelines -> Create a new pipeline. We need to set up for configuration of pipeline which is a 4 step process.

The python package which I am planning to host is in my GitHub. So I am going to connect my GitHub with Azure DevOps and authorise the same. 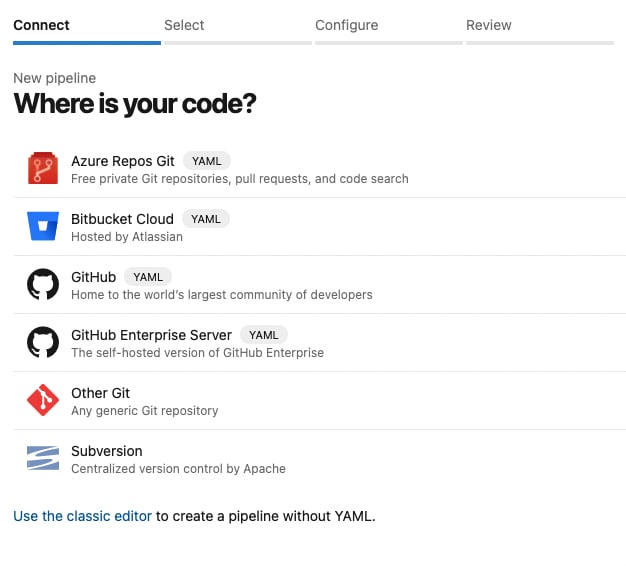 The required repository is selected.

Under Configure tab, select Starter pipeline and then In the Azure Pipelines, use the yml script given here

Review and Run the pipeline.

Once the pipeline is run, it creates a Dist folder in the code repo which has the artifact.

Start with an empty template.

A release pipeline takes an artifact and runs through several stages to publish the artifact as per the pipeline configuration.

To publish the python package, we are going to select the Build Pipeline artifact and create a stage with one jobs with three tasks.

Select the pipeline which we had created before as the source of artifact. 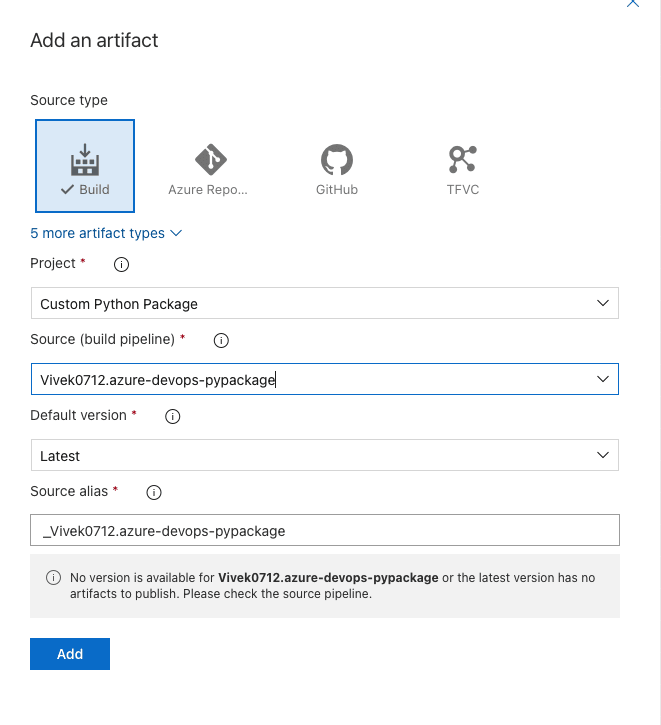 Click on the stage and give a suitable name for the same. Click on Jobs and then we are going to create three tasks here. Add Agent Job.

Search for Twine Authenticate on the right side and add the same.

Search for Command line and add it. Name the command script as Install Twine and add the following to the script

Search for Command line and add it. Name the command script as Publish Artifact and add the following to the script. Replace with the name of the artifact feed which we had created first and with the pipeline name

Once the release pipeline is successfully run, we can see the published artifact in the Artifact.

Now that our python package is published, we will see how to use it.

On the right top corner, click your account and create a personal token. This token is assured that the package is only accessed by authorised personals since it is private to the organisation.

Once the personal token is generated, go to the Artifact and click on the our python package artifact. Click connect to feed and choose either Twine or PyPI as publisher for the same. Follow the steps given there.

Once the steps are followed, with access token and the feed is connected, you will be able to install and access the python package.

Congratulations, you have hosted your custom Python package in Azure DevOps. If you reached at the end of the article, do follow, share the article.

Also, do check out my session on "Hosting Python packages in Azure DevOps" at Microsoft Reactor

Build a Machine Learning Model without a single line of code!

Once suspended, vivek0712 will not be able to comment or publish posts until their suspension is removed.

Once unsuspended, vivek0712 will be able to comment and publish posts again.

Once unpublished, all posts by vivek0712 will become hidden and only accessible to themselves.

If vivek0712 is not suspended, they can still re-publish their posts from their dashboard.

Once unpublished, this post will become invisible to the public and only accessible to Vivek0712.

Thanks for keeping DEV Community 👩‍💻👨‍💻 safe. Here is what you can do to flag vivek0712:

Unflagging vivek0712 will restore default visibility to their posts.