For the past few years, the Internet of Things ecosystem has been blooming. We are facing a new era for web and mobile development since we can create totally new experiences, interfaces or products using microcontrollers, 3D printers, dronesand smart devices.

Cheap, widely accessible and open source hardware and development boards like the Arduino Uno are getting lots of attention since it’s pretty easy to start prototyping and tinkering with them.

If you are interested in the IoT world and you are working on the web you may found yourself struggling to get started with embedded development. Usually, you have to be familiar with C/C++ in order to control boards from the Arduino family. Luckily though you can use JavaScript along with the Arduino Uno right away using Johnny-Five.

Johnny-Five is a JavaScript robotics & IoT platform originally developed by Bocoup. It allows us to use JavaScript to control microcontrollers either by compiling JavaScipt to native bytecode or by using a host machine externally controlling the target device over WiFi or via serial USB communication. It supports 40 different boards and has a powerful API for external modules and additional hardware components.

Using Johnny-Five with the Arduino Uno

Johnny-Five communicates with the Arduino from a host machine using the Firmdata protocol. We can use a serial USB cable to connect the host machine directly to the Arduino. It's important to note that Johnny-Five can actually work with different Arduino boards I have chosen to go down with the Arduino Uno since it's one of the most popular boards, widely available and supported by a vivid community.

For the purpose of this tutorial, we are going to try blinking a LED light, the "Hello world" example of IoT. You are going to need a few components:

The board has a set of general input and output pins used for connecting external modules. Each pin is labeled with a number so you can easily identify which ones are in use. There are also two 5V output pins and two pins labeled as GND, which we can use in order to power our prototype directly from the board. The wiring looks like this: 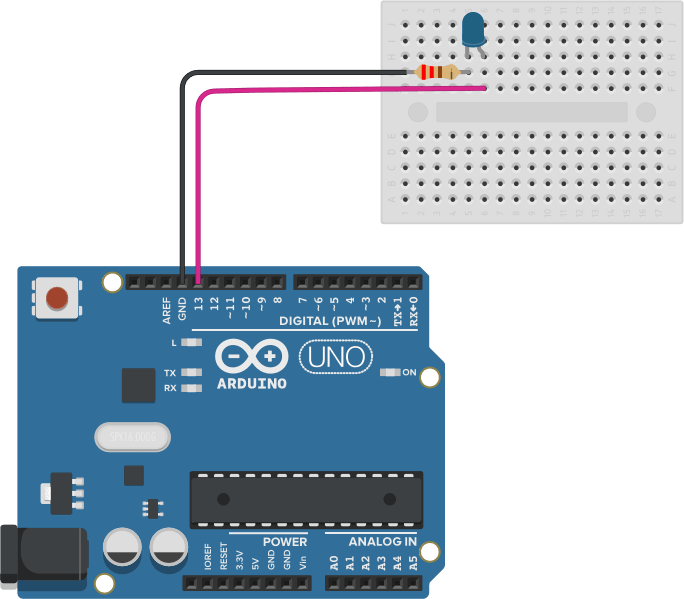 Using the jumper wires we connected the 13th pin with the LED anode (the longer pin of the LED) and the ground pin with the resistor that is also connected with LED. LEDs are power efficient and require a low current, thus we can power a few of them directly from the board without any external power supply.

Blinking an LED with Johnny-Five

Now let's move to the coding part. Install the Johnny-Five module and create the entry point as npm i --save johnny-five && touch led.js.
In the led.js file add the following snippet using your favorite code editor

Run the script using node blink.js. The LED should start blinking. Congratulations, you've started your journey into the IoT world!

This example is used in order to demonstrate a naïve example for newcomers into embedded development. Johnny-Five is a lovely framework to work with. There are also other solutions out there like the Cylon library.
Also, as I have mentioned before, using Johnny-Five with the Arduino Uno is a bit vague, we are actually using controlling the board remotely. Still, you only have to spend a tiny amount of money to get started developing and prototyping.
In the upcoming tutorials, I'll try to cover development for different boards like the Raspberry Pi Zero or the Espruino that allows us to actually control hardware in a more resilient and fun way.

This article was originally posted on my blog.

Sass Crash Course in a Book

kolkata ff how can the month record be saved in the database in this website.

I need to learn Angular!

vorillaz
I can write JavaScript for robots.
The Art of State Management in React.
#javascript #react #webdev #tutorial
How to Detect Idle Browser Tabs with JavaScript
#javascript #tutorial #api
We Want Your Help to Learn Together
#javascript #hacktoberfest #opensource #showdev