As a developer, some tools may be a game changer for your productivity, but sometimes we just need to work in an environment that makes things easier for us.

If you're constantly making typos on commands, or everything being on the same color makes it difficult to see mistakes, it will not be a big deal when you analyze those mistakes alone. But in reality, those things pile up until you find it weird that you are so tired at the end of the day. And this happens because you are using a lot of your focus just to make sure everything is alright while you're working.

I this tutorial, I'll show you how to set up a terminal that makes things easier while working, so that you can focus on what is really important and stop wasting your energy on small things.

This is the result you should have at the end: 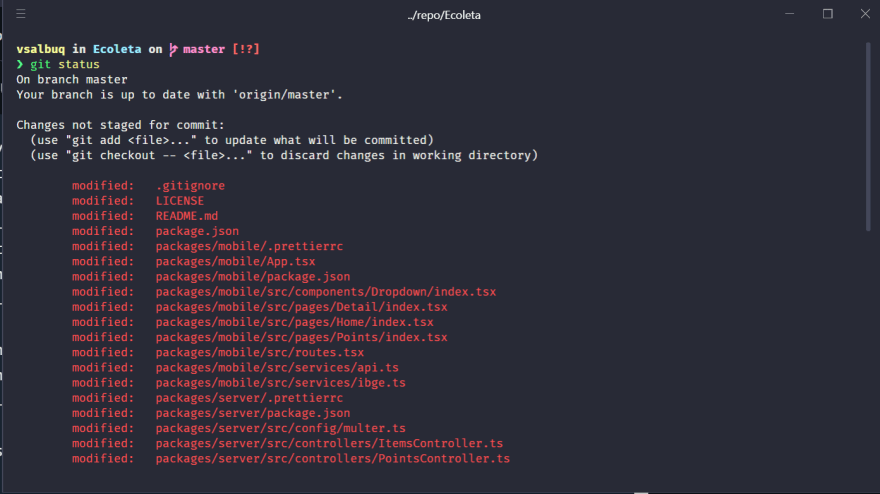 Warning: This tutorial is for people who are using Windows 10 Home Edition. It doesn't have Hyper-V, so the only way of having bash is via WSL1. If you have Hyper-V on your version, try installing WSL2. The rest of steps of the tutorial may be the same, though.

At the end, you will have:

You shouldn't have problems in this step. Just open Microsoft Store App and search for a distro. In my case, I installed Debian.

Open Debian from Start Menu. It will open a command prompt with the same features as Debian's terminal.

If you try to run sudo apt-get install zsh first, you may receive an error (Unable to locate package zsh). So, first you should run these two commands:

Now you will be able to install Zsh properly, running:

When the installation is done, run this:

This will walk you through some basic configuration for zsh.

While installing, it will ask if you want to set zsh as standard. Answer the prompt as you wish.

5. Set the theme Spaceship Prompt as default for Oh My Zsh!

Now you must edit Zsh configuration file so that Oh My Zsh! uses this theme. If you already have Visual Studio Code installed, you can open the file using the code bellow:

Add this line at the end of your .zshrc file:

Before going ahead, you need to install Fira Code font. Follow the instructions here.

You must have noticed the terminal is kinda buggy right now. It seems the fonts do not load properly. So, we will install Hyper to solve that problem. It will give you a pleasant experience, supporting all Spaceship Theme's features.

After that, open Hyper and its "Preferences" file (Ctrl + ,).

Important: Change <your-user-name> to your username on Windows. If you have installed other Linux distribution, change shell path accordingly. I believe all distributions installed via Microsoft Store will be at the same place, but I don't know for sure.

Another important thing: Your shellArgs attribute must be an empty array, otherwise it will not work.

I like the theme Dracula for Hyper. If you wish that too, add this on the config file too:

7. Add plugins to your terminal

Add this line at the end of your .zshrc file:

9. Don't Forget to set up Node

Some things you have installed on Windows will work already, but you'll have to install node specifically on your distro. We will use NVM (Node Version Manager) to have more freedom, if sometime we need to downgrade the version used keeping the other ones.

First, we need to install the basic build tools for node-gyp.

To do that, run this on your terminal:

Then you'll have to download and run the script for installing NVM:

Important: Before running this, check if it has the last version on the website (0.35.3).

After that, close the terminal and open it again.

Paste this code at the end of the file:

To load the changes you've just made, run

Set this version as the version nvm should use as standard:

Phew!!! If you endured until the end, congratulations. It was surely a long ride for me.

I just want to highlight something before ending this article: The path structure for navigating folders is a little different.

If you want to go to C:\Users\MyUserName\Documents\awesome-repo, for example, you will use cd /mnt/c/Users/MyUserName/Documents/awesome-repo.

This means your drives are at /mnt/. From there, the path structure is pretty much the same.

If something didn't work for you, or even if you have found a workaround for some specific problem, please leave a comment and I'll update this article as soon as possible. I'm sure it will help someone who passes by in the future.

methods: Is it possible to connect vscode (on a local machine) with Google Colab (the free service) runtime?

Vinícius Albuquerque
(He/him) Plays guitar and sings when no one is around to relieve tension, but please don't tell anyone he does that.
What was your win this week?
#discuss #weeklyretro
git is not the end of history
#git #github #healthydebate #watercooler
Resolving Merge Conflicts with Visual Studio Code
#tutorial #vscode #productivity #codenewbie

Once suspended, vsalbuq will not be able to comment or publish posts until their suspension is removed.

Once unsuspended, vsalbuq will be able to comment and publish posts again.

Once unpublished, all posts by vsalbuq will become hidden and only accessible to themselves.

If vsalbuq is not suspended, they can still re-publish their posts from their dashboard.

Once unpublished, this post will become invisible to the public and only accessible to Vinícius Albuquerque.

Thanks for keeping DEV Community 👩‍💻👨‍💻 safe. Here is what you can do to flag vsalbuq:

Unflagging vsalbuq will restore default visibility to their posts.