Sorry for going final harry potter movie on you. Anyway

OMG OMG it's ALMOST part 3 it's THE FUN PART TODAY – up until now all the steps we have made (see part 1 and part 2) are mostly plumbing, you gotta do these for each bot (there are a couple tricks to automate this. You can duplicate repos and heroku apps, and you can get all your keys using a single app like this).

However our actual posts leave a lot to be desired. i can't teach you to be funny (if i knew the secrets to that I'd be funny myself). In my own bots I use a lot of images to accomplish this. In cases like @readyforspoons or @fakefantas they are the whole point of the tweet. the dirty little secret here is that they are webpages:

There's a tool called puppeteer that i never know how to spell and that more serious people than me use for actual purposes that lets you automate spinning up Chrome (okay it's Chromium. Who cares, not the point), taking a screenshot of certain dimensions, and saving it to a file. This is a very neat closed loop, it means we can develop this in isolation* and then from our tweeting app, pick up the image and tweet it.

okay, almost isolation. In most cases you are gonna get some more stuff back from the page, like the text for the tweet or whatevers. More on this later

I'm sitting on a mcdonalds listening to fall out boy massively hungover thinking about deep stuff so let's make an aesthetics bot that makes these poster things you see on tumblr but it's lyrics from smash mouths 'all star' instead. (This is a terrible bot idea don't do this there's v little variation) 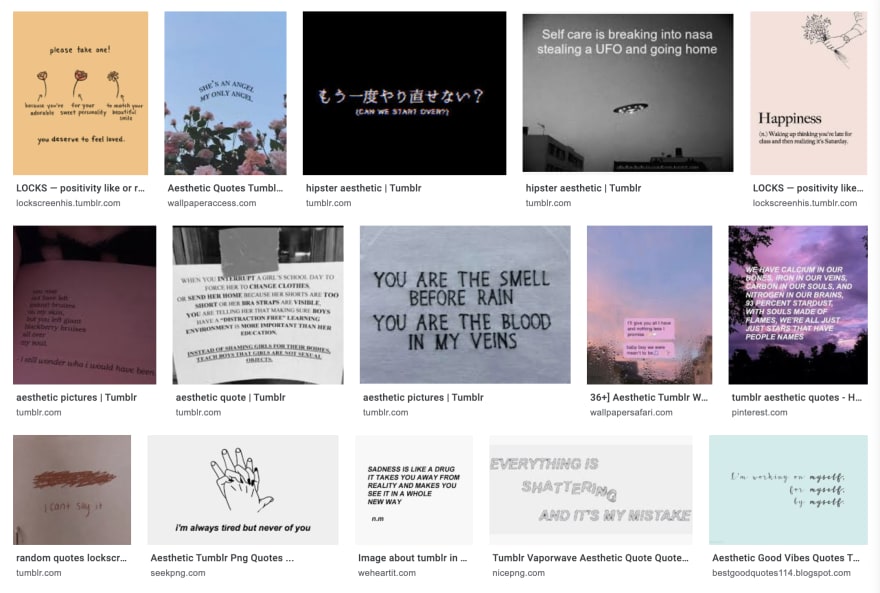 Now, research is always an important first step, there's a lot of different aesthetic quotes and we gotta figure out how much variation we want. Do we wanna cycle through images or just have one? (we are gonna have just 2 bc im lazy). If we are using random images, where are we gonna credit the authors? (i mostly riff of brands and for this I'll just use photos I took, you too can use VSCO on your phone). How do we wanna show the text? italic arial is a classic but if you want a challenge, doing chat bubbles is a cool idea. (we aren't)

I had a play around in sketch and much to my despair this looks exactly like a normal aesthetic post. there's no joke here, no clever subversion. Just teenage angst. I don't care. We are doing this anyway, you find a way to make the content work on your own: 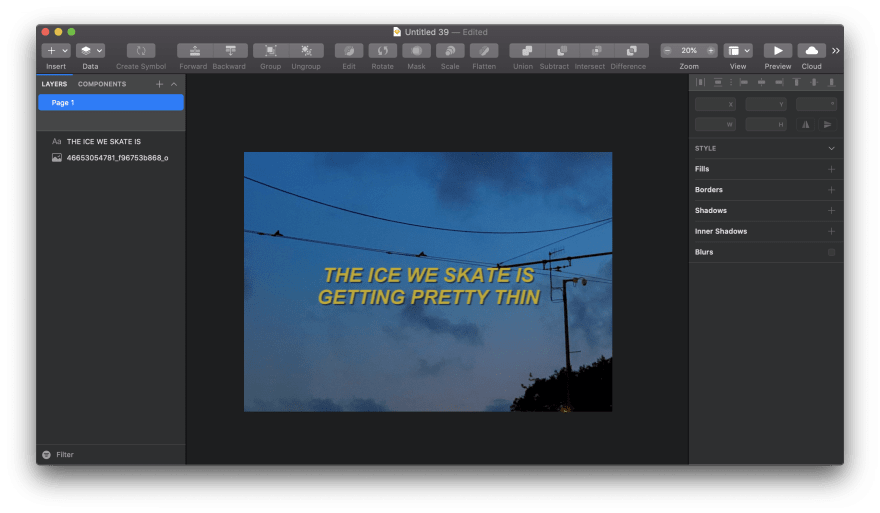 I have a bit of a confession to make, I got not clue how to make a webpage from scratch, the script and css tags elude me, so let's just copypaste some boilerplate from w3schools into a glitch sandbox because why not:

And throw in some CSS for styles:

And we got something that looks like this (I started this from scratch on glitch. At this point all we really care about is making a stand-alone webpage, we'll 'integrate' it into our 'pipeline' later: 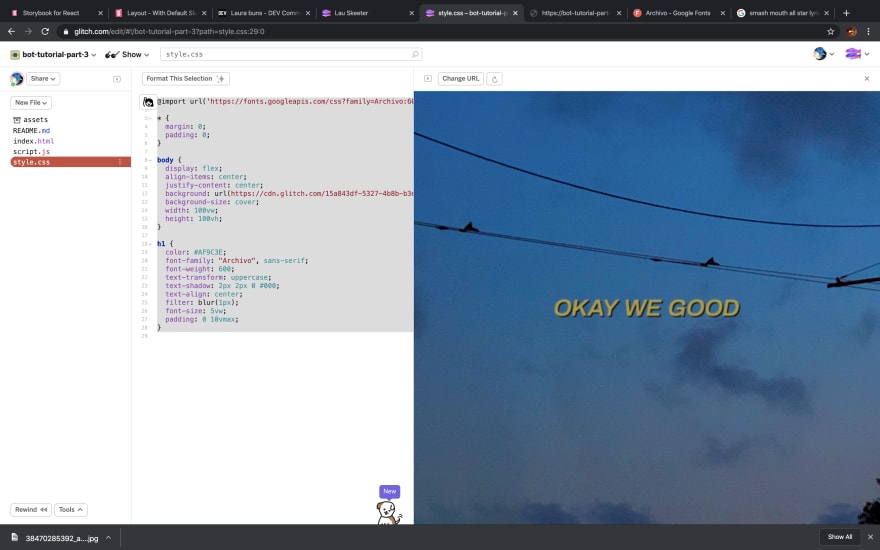 Let's actually plug some quotes into our JS (Get them here)

If the console.log is actually working let's plug the quote into our heading and see if that works out okay

Fun fact! We can use this oneliner because our script tag is at the end of our index.html, so the script is not gonna run until the browser has parsed the whole document, meaning at this point it already knows what our elements are.

Do you know what would be, like, real cool, right now? let's randomise the text color, i'm sick of that yellow already. I'm sure we can do npm i random-color-or-whatever but let's not do that because css is awesome when you are only doing websites for the last version of Chrome

In our CSS, let's switch our color up to use HSL. HSL rules, it stands for hue, saturation, and luminosity and what this means is that if we mess with the hue we get a whole rainbow of colors that all match the mood we are going for, and we can plug the hue as a css variable:

That we then set from our javascript like madmen:

(The second argument in var(), where we got a 0, is a fallback. if the CSS parser can't find a variable named --hue it'll use that value. For this use case it doesn't really matter because this is a closed loop and we know this variable is gonna be put in, but picking up good practices doesn't hurt.

You might have noticed that our hue thing is mostly working but also we got a problem, when the hue is on the blue range it kinda blends with our background. What's really cool about HSL is that we can sorta fix it? we know that when our hue is around a certain value (i fiddled with the devtools to find out which, if you don't wanna do it, it's 200-300) the luminosity is not enough and it just so happens that we have a luminosity value and it's another number we can mess with.

We can make something far nicer and maths based here but i don't have paper at hand and also i'm not a fucking nerd so I did this and it works out fine:

And plugged the --lumi variable in the css

There's like a lot you can do with just HTML and CSS to generate images for bots. Here's what I ended up with. Try out randomizing other values! If you wanna move your text flexbox is fantastic for that. Other things I've done myself is use 3D transforms or play a youtube video in the background to capture stills of it!

This is gonna move on to a final fourth part because i'm running out of weekend but let's get this integrated into our bot anyway,
One last thing! Because of annoying things like 'security', or 'progress', or 'chrome being a little bitch' having some static HTML website locally just doesn't cut it for a lot of things, including screenshotting it. You might also wanna scale up your JS to import multiple files or use SASS. Three very straightforward ways to take what we've got and put it on a real URL instead of a file URL:

We keep it on glitch and do nothing else

It does have a URL and this is gonna work - only thing is this is all a bit fragile, normally you want your code yo be a closed system.

If it's only static like this we can use serve

If you download this stuff as a zip and open a terminal and type npx serve you will immediately get a localhost url pointing to this folder. This is powered by the serve NPM package

Use parcel. use it like serve (npx parcel watch index.html). This will also serve your website on a local URL but behind the scenes it's compiling your js and css. You can read the docs to get an idea of the plugins you can use. This is what I do with most of my (newer) bots.

Next week we'll use puppeteer to take an image out of this and link it with the bot. have a good one!

Heya! I have fun with ui code at facebook. before that i tainted the guardian and TNW – outside of things im paid for i have fun with words in twitter @freezydorito

Getting Trapped as an Expert Beginner