While majority of the Node-RED community seems to be interested in home automation (me too, but just a little bit and I honestly think it's light-years ahead of other home automation solutions), I focus mostly on automating my ops tasks as a developer/engineer such as updating cluster resources, for that I wrote Keel, updating CLI clients through continuous delivery, manifests.

Homebrew is a package manager for MacOS where anyone can create their application manifests for an easy distribution and installation. However, there are multiple ways brew formulas can work, such as compiling during installation or downloading a binary. My method of installation is downloading a pre-compiled binary but I had to always remember to update the formula with the latest sha256 https://github.com/webhookrelay/homebrew-tap/blob/master/relay.rb#L5. If a newer version would be released without an update to this manifest, installation via homebrew would fail :) Well, and there were times when I forgot that :D

This flow is not directly reusable for you as it's working around my infrastructure. The purpose is to showcase some template generation, webhookrelay node and I also managed to find a problem in crypto node (more about it later).

Node-RED on RPI with node-red-contrib-webhookrelay so I don't need to expose it to the internet, GitHub account + node and Slack (that's really optional, but helpful as I push lots of updates to my Slack channel). 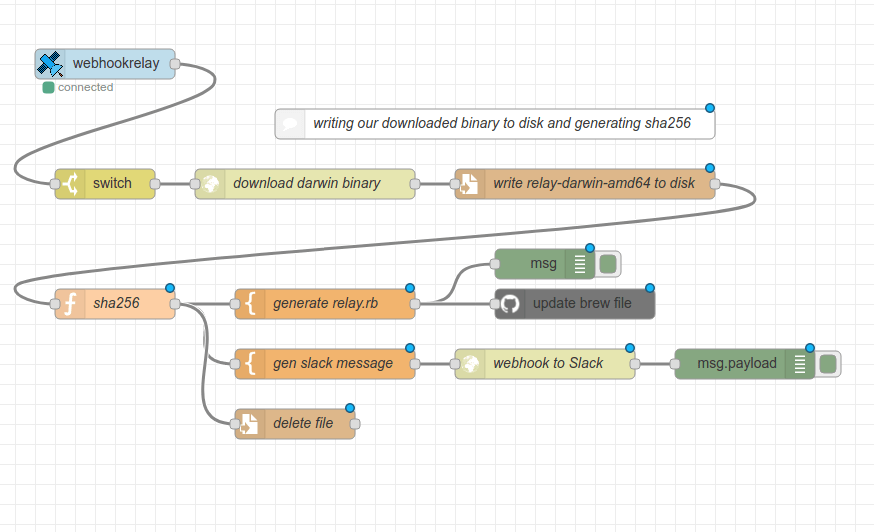 In settings.js enable require as we will need additional crypto libs:

And then read the file and calculate digest:

You could expand it to add pictures, buttons, attachments and so on, but in this case I just needed to see a notification.

So far I am really happy with Node-RED. Even though it would pretty pretty straightforward to just write everything in Go/JS/Python, for some reason it's more fun in Node-RED :) I will be automating more and more side project tasks with it. Also, function node is a life saver!

Once suspended, webhookrelay will not be able to comment or publish posts until their suspension is removed.

Once unsuspended, webhookrelay will be able to comment and publish posts again.

Once unpublished, all posts by webhookrelay will become hidden and only accessible to themselves.

If webhookrelay is not suspended, they can still re-publish their posts from their dashboard.

Once unpublished, this post will become invisible to the public and only accessible to Karolis.

Thanks for keeping DEV Community 👩‍💻👨‍💻 safe. Here is what you can do to flag webhookrelay:

Unflagging webhookrelay will restore default visibility to their posts.