From the evolution of the dark theme, developers now have a wide choice of color themes in most modern development IDE's that go beyond Light and Dark.

Ever since the release of Visual Studio Code, I have become a sucker for a nice color theme in my IDE's. To a point where I change my mind every other day. When using other IDE's such as Visual Studio 2020 you don't have to use it long to realize that the ecosystem of themes is pretty outdated.

However, I have been using JetBrains Rider for some time and have accepted their default themes as ones that are nice to develop in. But I've been wondering recently as to whether there are more advanced and customized themes out there.

After doing some digging around I realized that there is actually a huge ecosystem of themes out there for JetBrains Rider. With it being in parity to JetBrains IntelliJ a lot of similarities persist which has enabled theme building.

Having used Material UI in other IDE's such as Visual Studio Code I was amazed that we also have a port of this for JetBrains Rider. Meaning that my development in C# can be done in an IDE that now looks even more visually pleasing! You can download and install it via the plugins menu in Rider or read more here: https://www.material-theme.com/ . 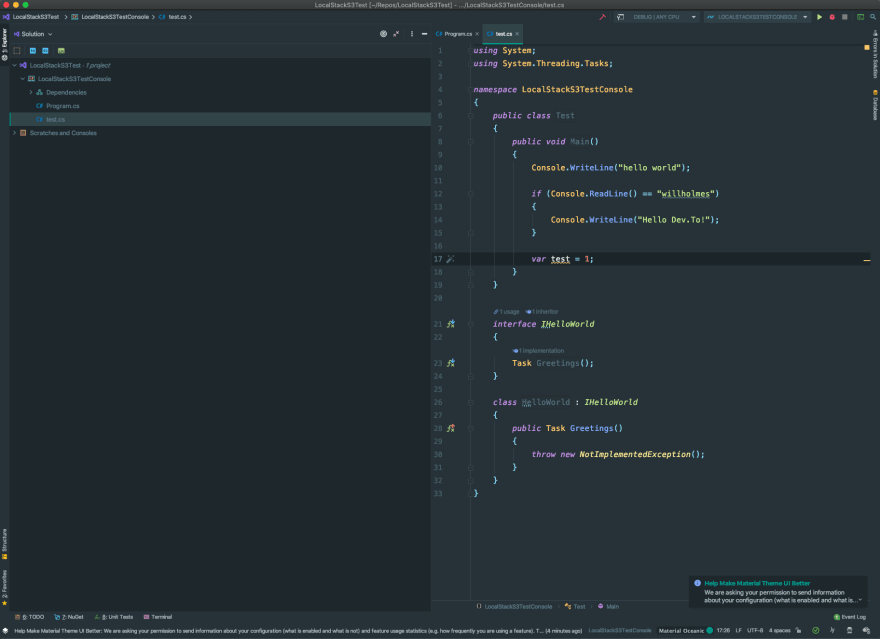 Above you can see what this theme looks like in practice. It's a beautiful implementation of the Material theme into the Rider IDE. Syntax highlighting isn't off and the icon pack is really minimalistic.

Just like for many developers, a setup that consists of a mechanical keyboard that suits them is very important. Selecting the right theme for your development IDE that you will go to battle with every day is just as important.

Thanks for reading, let me know in the comments below which theme's you like to use in your IDE 👇

How does Virtual DOM work? (Build your own)

Will Holmes
A self taught full-stack developer since 2015, living in the UK.
Why Netlify has mastered CI/CD
#beginners #webdev #netlify #javascript
An intro to styled components in your react project
#react #webdev #css #beginners
Building a portfolio site in GatsbyJS
#gatsby #javascript #webdev #beginners
Forem Open with the Forem app