In this blog post I would like to show you how easy you can run 3 different Docker containers all at once using single command. 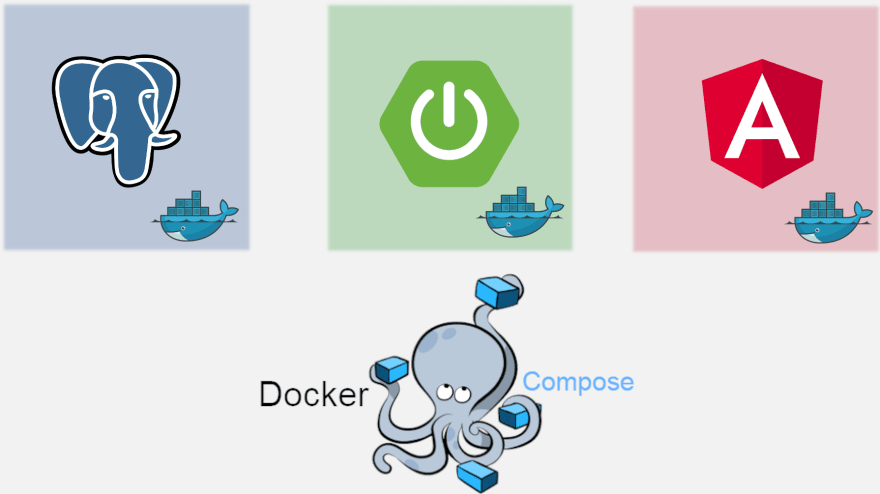 Basically Docker containers are applications and all dependencies (libraries, artifacts, etc.) which are required to run it. For example all Java applications needs to have JDK installed on the machine where you would like to compile your code. Thanks to Docker you don’t need to install any of it so the software can be ran wherever you want.

So Docker solves the problem ‘Works on my machine’. Great! But what next?

As you might already heard it, nowadays one of the most popular architecture pattern are microservices. Each microservice is a small app designed to do only little part the entire system. They are put into the containers (usually Docker) and interact with each other (usually by HTTP REST API).

So now we can have a problem. If you’re building such complex system with multiple services you might end up with hundreds of such containers. And such is very hard to manage. Imagine the situation when you want to run all of them, and if you try to do so only with ‘vanilla’ Docker you may waist an entire day just typing the commands for each microservice!

But likely there is a hope! Docker Compose.

This tool can help you build Docker images and run containers based on a single file docker-compose.yml!

How it looks like and how you can use it? This is what I would like to show you, but first let me introduce my project which should help you understand the idea of Docker Compose.

Kanban Board — is a simple implementation of a kanban board, tool that was first introduced in Toyota automotive and now it’s widely used software development for managing tasks. If you want to know more about it go check What is a Kanban Board? video to help you understand it basic concept.

My small application is made of 3 smaller pieces:

In order to follow me you will need to have Docker installed on your machine. The best part is that you don’t need to have installed all the dependencies, like PostgreSQL, Java or Angular to run the app. The only thing that you need to install is Docker!

Instructions how to install Docker on Ubuntu , Windows , Mac.

Docker Compose is already included in installation packs for Windows and Mac, so only Ubuntu users needs to follow this instructions.

Now the fun part. First git clone my project from my GitHub repository, it can be done with a command (in the terminal):

Next, in the terminal enter the root folder of the project and type the command:

Now, you need to wait couple minutes so all 3 Docker containers will be up and running. After that you’ll be able to enter a frontend in a browser with a link: http://localhost:4200.

Awesome! If you want check what REST endpoint the backend is providing you can its Swagger UI page, and which is reachable from the url: http://localhost:8080/api/swagger-ui.html. 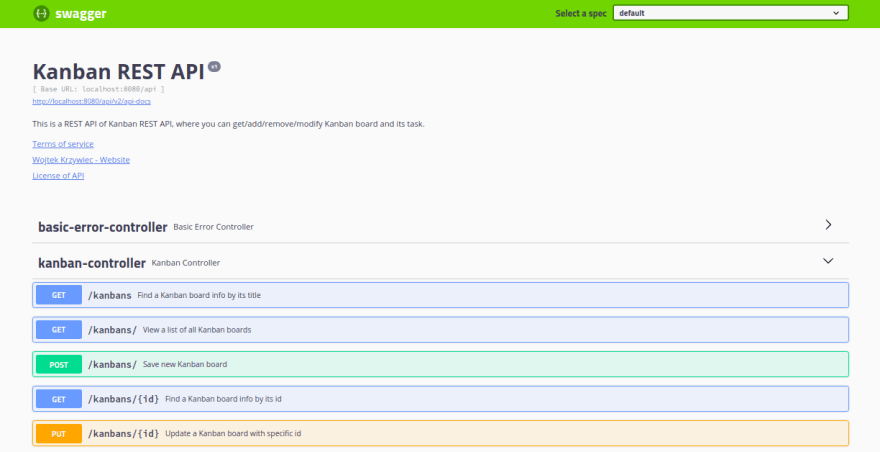 And if you’re a database geek you can also connect to it using PgAdmin, Dbeaver or other database client app with following credentials:

If you want to stop all these apps all at once you can run the command:

Ok, so how this magic really works? The key to is a configuration file docker-compose.yml located in the root folder of my project.

Let’s break it piece by piece.

If you want to know more about Docker Volumes and databases in Docker containers you can check my previous entry about this topic.

In postgres:9.6-alpine Docker image there are several variables that defines the name of the user, database and others. By simple replacing them with your own you can adjust them to your needs. For my project I wanted to have the database, user name and user password to be the same and have value kanban.

The above Dockerfile consists two build stages. In a first one (2–7 line) the code of an app is compiled to the jar file and then in the second stage (10–13 line) the jar file is copied to it and then run in a new container.

Each stage is a different Docker image, but only the last one is used as the outcome. The reason for this approach is to make a resulting Docker container as thin as it could be — it should contain only the compiled jar file without source code.

Nothing new is added to definition of this service. Similar to previous ones it defines the container_name , ports (this time the host’s 4200 port is mapped to the container’s 80 ) and links it to the backend service.

The only difference is that a base Docker image needs to be built and it’s located in kanban-ui folder, where Angular code is located with it’s Dockerfile.

Similar to Java container it has two build stages, first one for compilation and second one for running compiled project. And because the application is running on nginx server there is also some default configuration added to it (line COPY default.conf /etc/nginx/conf.d/default.conf). More information about multi-stage Docker build for Angular project you can find in my previous blog post.

When you’ll be playing around with Docker Compose you might want to use also different CLI commands that it offers. The full list can be found on the official website, but found these the most useful during development of my app:

The -d flag runs all the containers in the detach mode — all containers run in the background, so you can use a terminal for other purposes.

The --force-recreate flag will stop all old containers that are running and will create them from scratch. It was very useful when I’ve done some changes to several application at once.

Above command stops and removes all images.

When I was working on kanban-ui several times I’ve stomped on the problem that some of required functionality wasn’t implemented on the backend side. Therefore I was forced to stop all containers, make a change, run Compose again and then test it. And that takes me a lot of time because building a Java and Angular image takes several minutes, which forced me to stair on the wall during this process.

Nevertheless, it awesome tool to use, especially when you’re working on multi-service project and you develop only single service.

As usual, you can check the entire Kanban Board project in my Github repository:

Once suspended, wkrzywiec will not be able to comment or publish posts until their suspension is removed.

Once unsuspended, wkrzywiec will be able to comment and publish posts again.

Once unpublished, all posts by wkrzywiec will become hidden and only accessible to themselves.

If wkrzywiec is not suspended, they can still re-publish their posts from their dashboard.