Rust is a blazing fast and memory efficient programming language that's used by tech companies like Firefox, Dropbox and Cloudflare to name a few.

Today we are going to focus on the web side of Rust, hence the name "Rocket".

Well, per the official website rocket.rs - "Rocket is a web framework for Rust that makes it simple to write fast, secure web applications without sacrificing flexibility, usability, or type safety". That's a self explanatory introduction, nothing more I can add.

Having completed the formalities, let's launch some Rockets.

or you can set it as the default toolchain for your Rocket project only by running the following command inside the Rocket project's directory after having created it.

Add Rocket as a dependency in the Cargo.toml file found on the project's root.

Update the src/main.rs file by adding a bit of Rocket code

Then run the following command,

Rust will fetch all the dependencies used by Rocket, make a dev build of our project and run the binary code, launching our project.

In the output above, Rocket has launched our project on the 8000 port, so to view it navigate to http://localhost:8000.

All we did on the main/src.rs file is declare an index route, mount it at the "/" path and launch our rocket app.

Rocket applications center around routes and handlers, where a Rocket route is simply a combination of parameters matching an incoming request and a handler that processes the request and returns a response.

A route is declared by annotating a function just as in the example above, the index route is:

Let's add a new route to our Rocket project.
Add the following code after the index route.

And re-run the cargo project.

When you try navigating to the /about page, you'll see a 404: Not Found error.

Well, Rocket needs to mount routes before dispatching requests to them, that is the reason we have rocket::ignite().mount("/", routes![index]).launch(); inside the main() function for the first route.
Let's mount our __about page_ route too. Update the main() function with the following code.

Re-run cargo and try visiting the "/about" route again.

After declaring and mounting our routes, we call the lauch() method which starts up the server and has our Rocket app up and running waiting for incoming requests to dispatch them accordingly.

For more on Rocket requests head to the official documentation

Before proceeding with the next step, use git to stage and commit all the changes done to the app.

Start with creating an account on Heroku if you do not have one before proceeding. 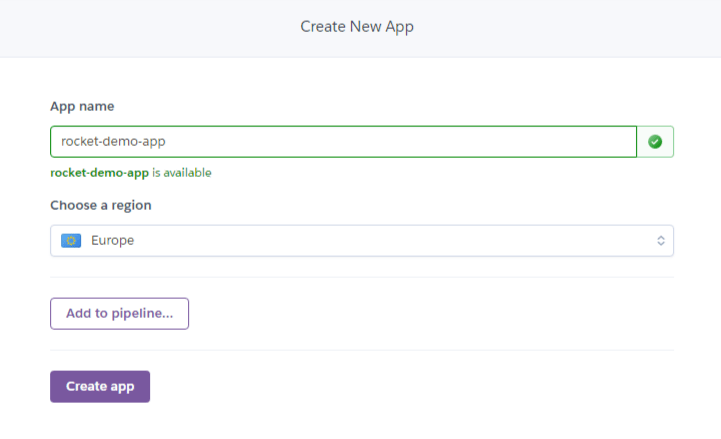 Next, download and install the Heroku CLI, then proceed with running the following command inside the project's directory.

Back on the project, link the remote Heroku app to your Rocket project with the following command.

Create a new file on the project's root and name it Procfile without any extensions, add the following code into it.

Specify a nightly version of Rust to work with by creating another file on the project's root, naming it rust-toolchain (without a file extension).
The following nightly version is a good start:

Then push the changes to heroku.

After finishing all it needs to do, the command-line tool will give you the link your app has been deployed to, open the link and view the deployed app.

Above is an example output you'd expect from the heroku-cli tool.

This is a nice start when delving into deploying Rust applications and in this particular case we were deploying a Rocket framework app on Heroku.

There is so much more to learn and experiment in this "fast, easy, and flexible" framework, this has just been a short intro into deploying it, more can be learnt here.

Go out there and launch some Rockets.