When deploying your web application you will likely be using Docker for containerization. Many base Docker images like Node or Python are running Alpine Linux. It is a great Linux distro that is secure and extremely lightweight.

However many Docker images provide Alpine without its OpenRC init system. This causes a few issues when trying to run sidecar services with your primary process in a Docker Container.

Let's imagine that we have a remote server hosted somewhere. We are using this server for deploying our production application. To run the application in an isolated environment we are continerizing a Node.js/Python/nginx or any other app. To administrate processes we would want to have direct access to production environment - docker container in this case. SSH is the way to go here, but how should we setup it?

We could SSH into the remote server and then use docker exec but that would not be a particularly secure or elegant solution. Perhaps we should forward SSH connection to the Docker container itself? 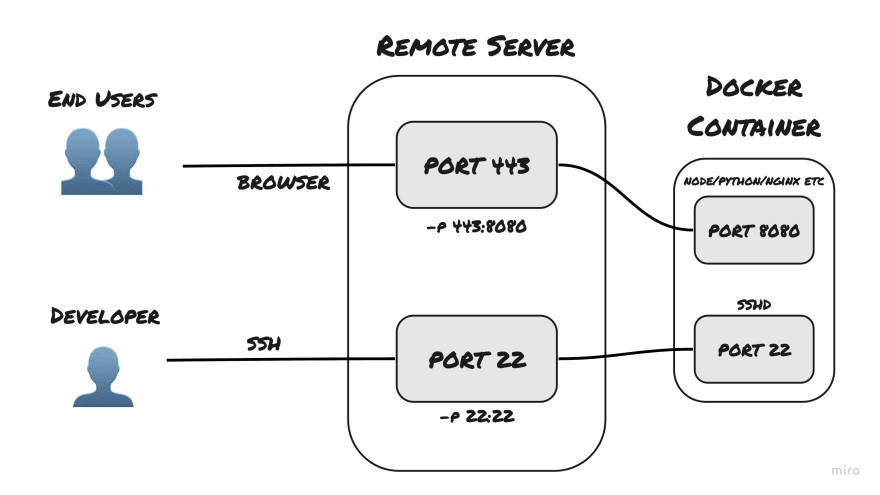 Binding ports is fairly easy - we will bind not only port 443 (or any other port you might use for your use case) but also port 22. Run command would like something like docker run -p 443:<docker_app_port> -p 22:22 <container_id>.

The more challenging part would setting up the actual SSH inside the container. We will take a simple Node.js Dockerfile as a base.

To reproduce the connection to a remote server we would be running this Docker image locally and connecting using localhost.

Firstly, in order to be able to login as root (or any other user) we would have to unlock the user and add authorized SSH keys (unless you would want to use text passwords to login which is very insecure).

Now the root user is unlocked to be logged into and there is a folder for SSH configuration. However at the moment anyone can login as root since there is not password and password auth is enabled by default. Our goal would be to disable password auth and to add our public key as an authorized one for this user.

You may also use a different user for this purpose - just replace /root with the path to the desired users home directory and replace username.

Now in order to disable password auth via SSH we have to first install SSH. I will be using OpenSSH for this but other implementations should work similarly.

Stripped Alpine Docker images like the Node one do not provide OpenRC by default so we should install it ourselves. Then generate host SSH keys so clients may authorize our container as an SSH host. Finally, append PasswordAuthentication no to the end of sshd_config to disable password auth via SSH.

For real applications you would invest in pre-generating host keys so that keys do not update every time a new container is built. However this and managing keys more elegantly is out of scope for this post.

At this point we may start the sshd service.

Service is crashed because Alpine Docker images allow only a single process to be launched. It is actually a good concept that facilitates using microservices and creating docker compositions. However in this particular case there is not way to run SSH in a different container. To avoid that the actual ENTRYPOINT or CMD command should boot multiple processes.

In this final Dockerfile I combined all previous RUN commands into a single one to reduce the amount of layers. Instead of running rc-status && rc-service sshd start in RUN we do that in ENTRYPOINT inside sh -c. This way Docker container will execute only a single process sh -c that would spawn childs.

As a side effect this Node.js application will not recieve SIGINT/SIGTERM signals (or any other signals from Docker) when stopping Docker container.

Run built container using docker run -p 7655:22 <container_id>. In a different terminal instance run ssh root@localhost -p 7655. Voila - you successfully SSHed into a Docker Container. Using SSH for your production app would be the same except you would be using its IP instead of localhost and a valid port.

To properly build and run container without an app around it replace yarn start with node and remove yarn/yarn build directives.

When any difficulties with running SSH may arise first try to docker exec into the container and check rc-status. sshd service should be started. If it has crashed or is not present you may not be starting it properly in ENTRYPOINT or have incorrect configuration in sshd_config. You may also be missing SSH host keys or use an already bound port.

To further troubleshoot you can run the container with docker run -p 7655:22 7656:10222 <container_id>. Then docker exec <container_id> and run $(which sshd) -Ddp 10222. This would create another instance of sshd that would listen on a different port (10222) with verbose logging. From there you should see informational messages on why the process might crash.

If the process does not crash attempt connecting. Run ssh root@localhost -p 7656 on the Docker host machine. From this point you will see additional logs in your previous terminal window with details on why the connection has been refused.

Once suspended, yakovlev_alexey will not be able to comment or publish posts until their suspension is removed.

Once unsuspended, yakovlev_alexey will be able to comment and publish posts again.

Once unpublished, all posts by yakovlev_alexey will become hidden and only accessible to themselves.

If yakovlev_alexey is not suspended, they can still re-publish their posts from their dashboard.

Once unpublished, this post will become invisible to the public and only accessible to Alexey Yakovlev.

Thanks for keeping DEV Community 👩‍💻👨‍💻 safe. Here is what you can do to flag yakovlev_alexey:

Unflagging yakovlev_alexey will restore default visibility to their posts.