In the last post, we looked at the use of an Alternative of find command fd command.

Today, we are going to have a look at the keyboard shortcuts for Linux Terminal that will make our life easier.

Let's have a look at some basic and most useful commands

In the above command, the one that I use the most is the Ctrl-l since it allows me to clear the screen without the need of typing the clear command again and again.

Now, Let's have a look at some advanced commands to help our movement in terminal

We can use home and end key to move at the beginning and end of the line as well.

The ability to move at the beginning or end of a word using Alt-f Alt-b is what I find most useful since we don't have to move back character by character.

Alt-t is something that you don't think you need until you start using it.

So this is all for today. Let me know what's your most used and if I missed something just let me know in the discussion below. 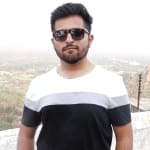