In this post, we will create a Local CI/CD workflow for a Spring Boot Application and deploy it to Kubernetes using Skaffold.

It is a known fact that developing applications with Kubernetes is cumbersome. That is the reason there is an ecosystem being developed around it so that developers can focus on what matters most to them i.e. writing code. On that note, in this article, I will be covering another tool Skaffold developed by Google.

So what exactly is Skaffold?

Skaffold handles the workflow for building, pushing and deploying your application.

What problem it is trying to solve? 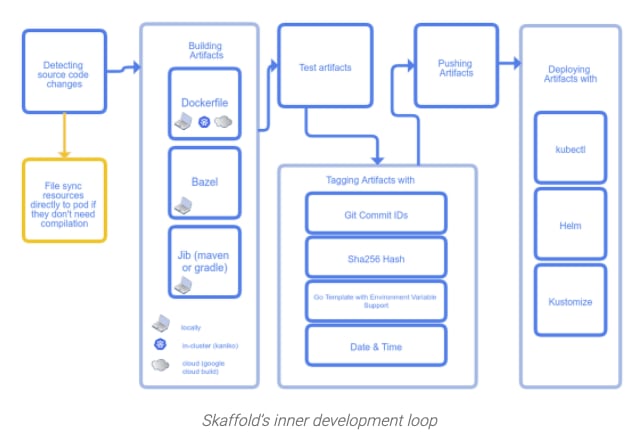 Following are some of the benefits of using Skaffold.

It’s is a client-side utility only so there is no cluster set up or anything to maintain.

It’s very easy to share among your team members as you only need to do the following to get started.

To get your application containerized even locally you have to do a lot of things. For your local development, you might be doing something like building, pushing, and then deploying your application on Kubernetes. And there are a different set of commands (docker blah, kubectl blah blah, etc.) and the tools you use for each of these phases of your workflow. With Skaffold you just have one magical command skaffold run or skaffold dev and you are golden. This doesn't mean you don't have a dependency on those tools that require you to build and deploy applications to Kubernetes. It's just that development is a lot easier when you just run a single command.

Anatomy of the Spring Boot Application

In this tutorial, I will be using a Spring Boot application which when accessed via /states REST endpoint shows Indian states and their capitals. This application uses an in-memory H2 database which inserts rows at the start of the application and keeps it in memory. The source code is available here.

For this demo following are required to be installed.

I have used macOS but you are free to use any preferred OS you like or have experience working with. I have mentioned Minikube installation is optional because if you already have Docker desktop installed you can enable Kubernetes by following the below steps.

To start with Skaffold you would require a skaffold.yaml file. For that, we can run the below command.

However, you will be greeted with the following error message.

The error seems to be self-explanatory that Skaffold is looking for either Dockerfile or Jib configuration in your project.

So to resolve this error I will be adding the Jib maven plugin in pom.xml file. If you are wondering what is Jib and its usage you can read my previous article. You can enable Jib support by copy/pasting the below content to pom.xml file.

As per official documentation.

skaffold init also recognizes Maven and Gradle projects, and will auto-suggest the [jib](https://skaffold.dev/docs/pipeline-stages/builders/#/local#jib-maven-and-gradle) builder. Currently jib artifact detection is disabled by default, but can be enabled using the flag --XXenableJibInit.

Now run skaffold init with --XXenableJibInit. However, it will fail again with the below error.

Since we have not created Kubernetes manifests(deployment, pod, service, etc.) and there is a known issue with Skaffold and to resolve this error we will have to create them manually using the below kubectl command.

We have created both deployment and service now. Please make sure to copy the output of the above command to YAML files in the k8s directory.

We have now completed the required setup to start continuous build and deployment of our Kubernetes application. Now we can simply run the below command to start our CI/CD workflow locally.

As you can see after redeployment number of replicas has increased to 2 which was expected.

This is similar to skaffold dev but the main difference is that the workflow described in skaffold.yaml is executed just once. This is recommended for your production workflow.

If you have all the required dependencies(docker, minikube, skaffold) installed locally then it's fine otherwise you can skip the installation part as I have described above in the prerequisite section by using Google's Cloud Shell to replicate your local Kubernetes environment. Cloud Shell provides a browser-based terminal/CLI and editor and it comes with Skaffold, Minikube, and Docker pre-installed, and it's free.

Just run following commands and that's it. Make sure docker and minikube are up and running in Cloud Shell environment.
git clone https://github.com/yrashish/indian-states
skaffold dev
Following are the screenshots from Cloud Shell. 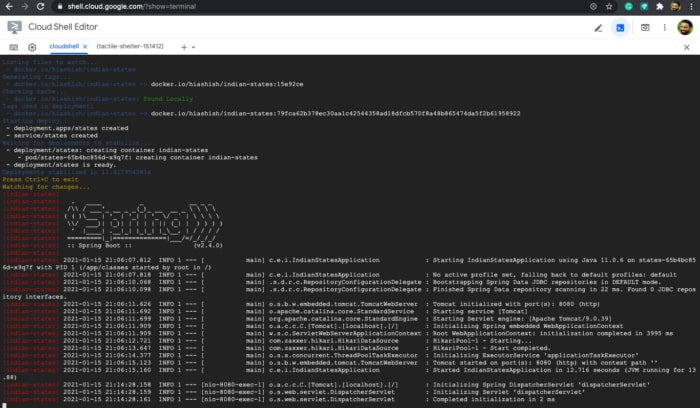 As you can see above we were able to run our Spring Boot application with Cloud Shell also and got the expected output.

In this article, I have just covered a handful of features that Skaffold provides. There are a lot of other features worth looking at like port-forwarding for debugging, health checks and templating deployment configurations, etc. It is worth considering Skaffold for continuous deployment of your Kubernetes applications.

You can also read some of my previous articles.

Could not execute because the application was not found or a compatible .NET SDK is not installed.

Getting started with Jenkins: Agents

Boilerplate for a basic AWS infrastructure with EKS cluster