Lately I've had to work with Figma a lot at work. As I get to know the tool and its functionality better every day, I've found that you can do some really cool stuff now, as opposed to a year and a half ago when I used Figma a few times.

In this tutorial, I want to show you how to create a hover effect using swapping overlays. The basis will be a logged in page with navigation bar, where when you tap on the user icon, an overlay opens and you can choose to change your settings or log out.

I'm starting with a desktop frame, since the hover effect is triggered when using a mouse. I'm keeping the style simple. I'm assuming you already know some basics of Figma.

I have created a simple layout with a header, a navigation bar and a home page. In the navigation bar we can see the image of the user profile to which we want to add an action later.

You can see all the frames and components created on the left side in the sidebar, which is called pages in Figma.

Endpoints
I created another modal that displays a form where the user data can be updated. I also created a frame that will be displayed when the user logs out.

If you click the prototype tab on the right side of Figma, you can add actions to the frames and components you create.

Additional settings for the overlay can be selected. I choose to manually position the overlay under the profile image, with a darker background under the overlay and that it closes automatically when a user clicks outside the overlay. 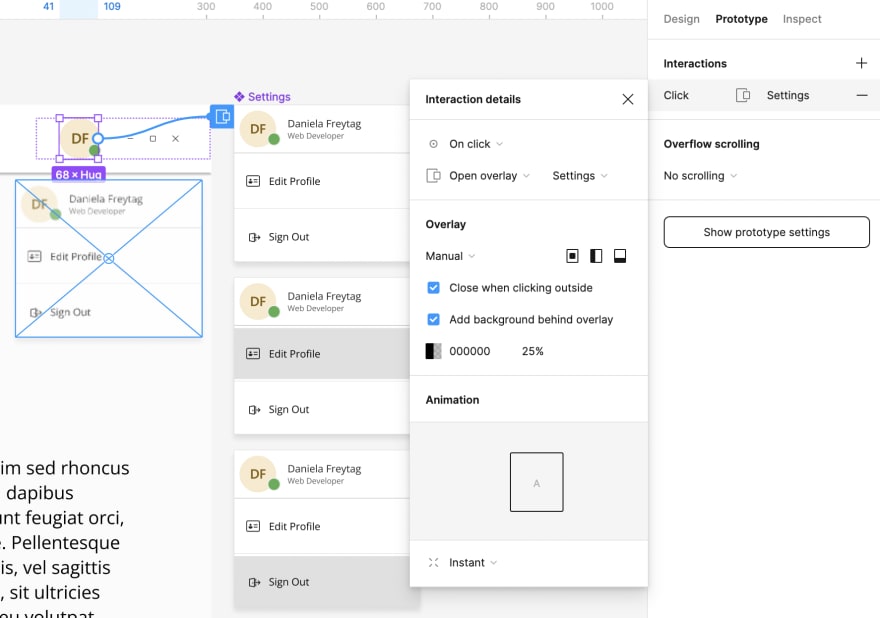 Hover effect on tabs in modal
To add interaction on the two tabs, we select the first tab edit profile and use the state while hovering. We now want the overlay to be swapped with the overlay that has the hover state. 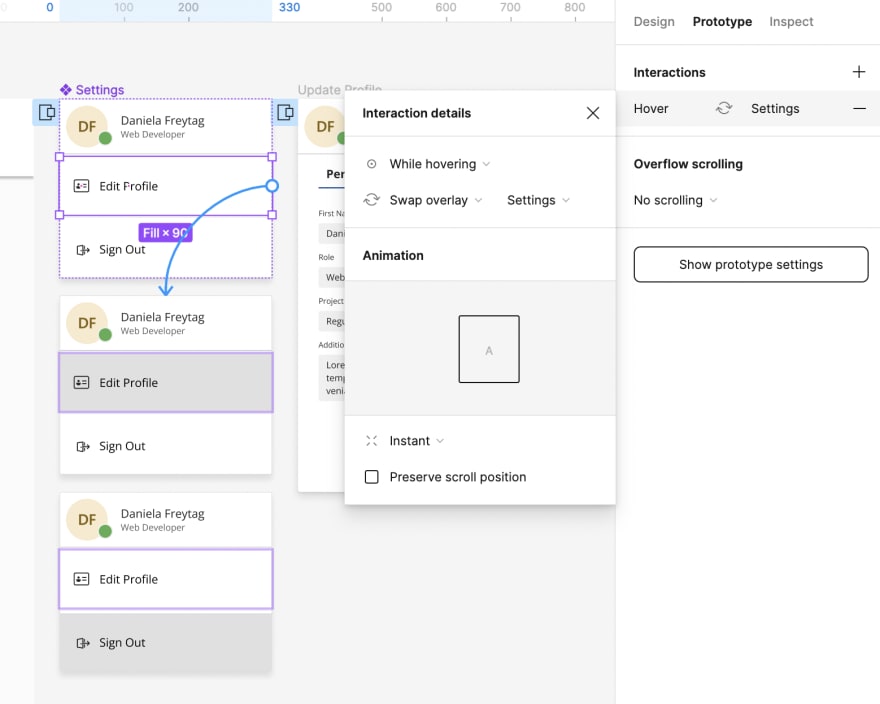 Repeat this process with the sign out selection on the original component. 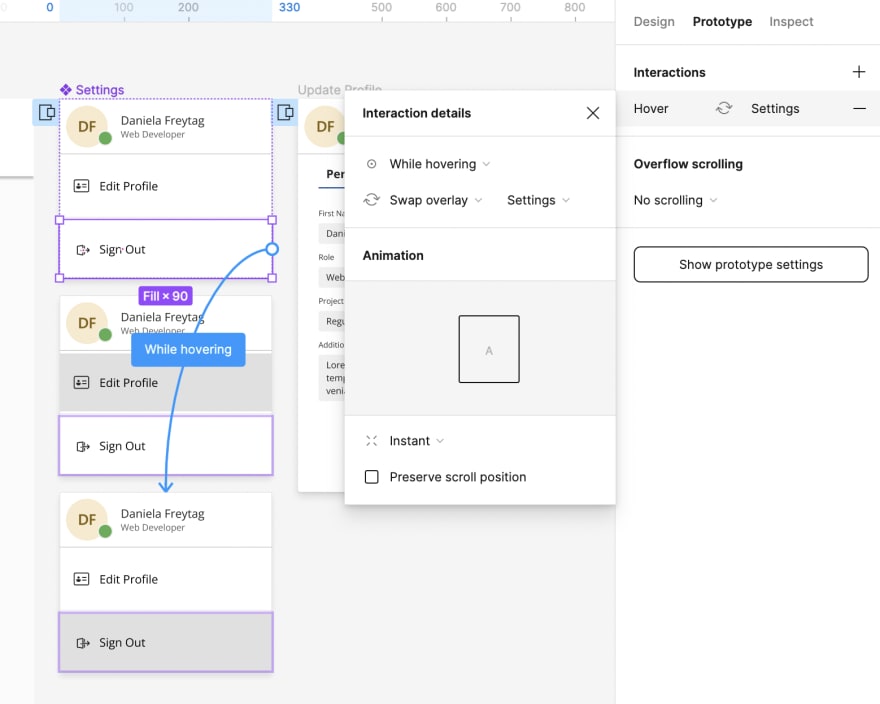 We also want to have the hover effect on the swapped overlay from the other tab, so we need to add the interaction on each instance as well. 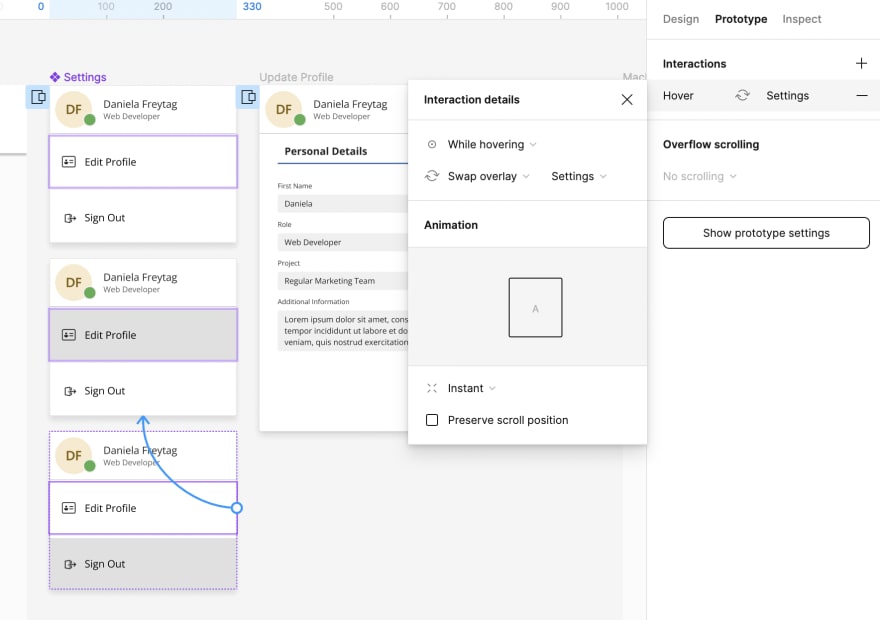 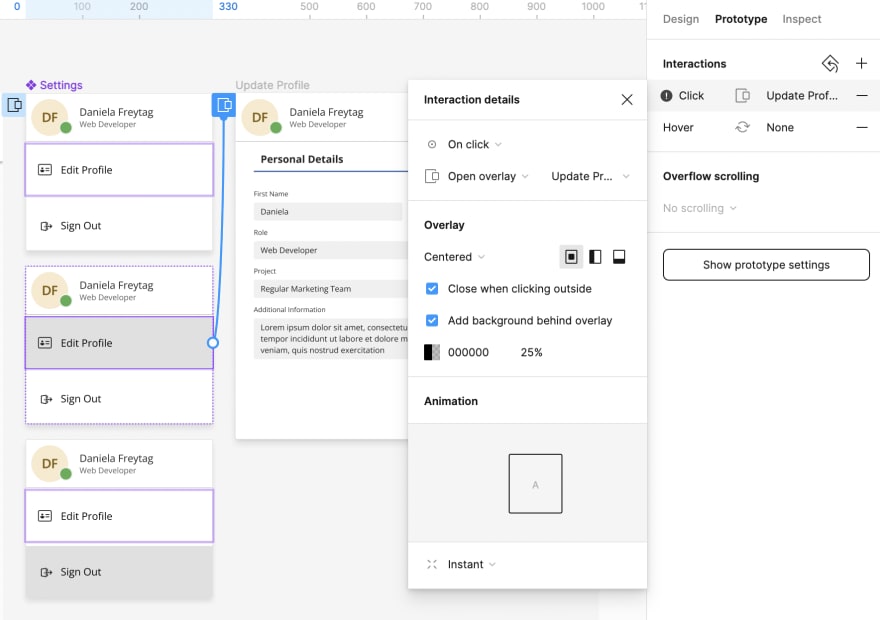 For an on click interaction on the sign out tab, use "navigate to" and select the "logged out" endpoint frame, as the entire frame is to be changed.

It's super awesome how interactive Figma is compared to the day I started using it. It makes the experience pretty awesome and realistic, which makes it easier for developers to translate the design into code.

Thanks for your reading and time. I really appreciate it!

Once suspended, yuridevat will not be able to comment or publish posts until their suspension is removed.

Once unsuspended, yuridevat will be able to comment and publish posts again.

Once unpublished, all posts by yuridevat will become hidden and only accessible to themselves.

If yuridevat is not suspended, they can still re-publish their posts from their dashboard.

Once unpublished, this post will become invisible to the public and only accessible to 𝕁𝕦𝕝𝕚𝕒 👩🏻‍💻.

Thanks for keeping DEV Community 👩‍💻👨‍💻 safe. Here is what you can do to flag yuridevat:

Unflagging yuridevat will restore default visibility to their posts.