Toward the end of last year, I had the good fortune of publishing a reference guide on using OpenCensus for distributed tracing. In it, I covered distributed tracing fundamentals, like traces, spans, and context propagation, and demonstrated using OpenCensus to instrument a simple pair of frontend/backend services written in Go. Since then, the OpenCensus and OpenTracing projects have merged into OpenTelemetry, a "single set of APIs, libraries, agents, and collector services to capture distributed traces and metrics from your application." I wanted to attempt to reproduce the work I did in OpenCensus using the new project and see how much has changed.

For this exercise, I built a simple demo. It consists of two services. The frontend service receives an incoming request and makes a request to the backend. The backend receives the request and returns a response. Our objective is to trace this interaction to determine the overall response latency and understand how the two services and the nework connectivity between them contribute to the overall latency. 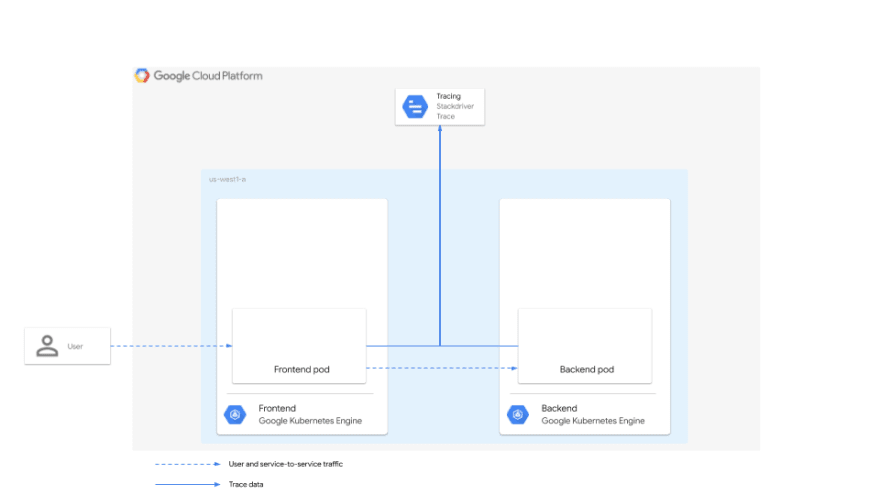 In the original guide, the two services were deployed in two separate GKE clusters, but that is actually not necessary to demonstrate distributed tracing. For this exercise, we'll simply run both services locally.

While the basic concepts are covered in the reference guide and in much greater detail in the Google Dapper research paper, it's still worth briefly covering them here such that we can then understand how they're implemented in the code.

From the reference guide:

A trace is the total of information that describes how a distributed system responds to a user request. Traces are composed of spans, where each span represents a specific request and response pair involved in serving the user request. The parent span describes the latency as observed by the end user. Each of the child spans describes how a particular service in the distributed system was called and responded to, with latency information captured for each.

This is well illustrated in the aforementioned research paper using this diagram: 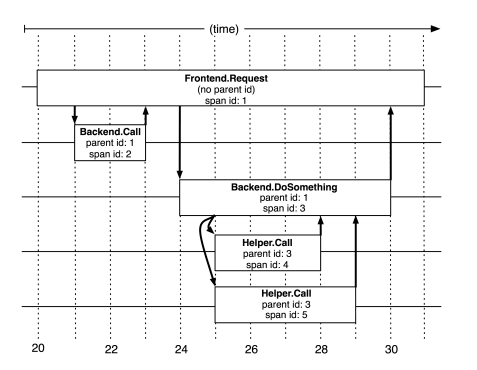 Let's take a look at how we can implement distributed tracing in our frontend/backend service pair using OpenTelemetry.

Note that most of this is adopted from the samples published by OpenTelemetry in their Github repo. I made relatively minor changes to add custom spans and use the Mux router, rather than just basic HTTP handling.

Mostly, we're using a variety of OpenTelemetry libraries at this point. We'll also use the Mux router to handle HTTP requests (I mostly use it because it seem to be similar to Express in Node.js).

Next, let's have a look at the main() function for our service:

As you can tell, this is pretty straighforward. We initialize tracing right at the start and use a Mux router to handle a single route for requests to /. We then start the server on port 8080. I added an environment variable to check to see whether I'm running the code locally to bypass the MacOS prompt to allow inbound network connections as per these instructions.

Next, let's take a look at the initTracer() function:

Here, we're simply instantiating the Stackdriver exporter and settting the sampling parameter to capture every trace.

Finally, let's look at the mainHandler() function that is called to handle requests to /.

Here, we're setting the name of the tracer to "OT-tracing-demo" and starting a root span labeled "incoming call". We then create a child span of that labeled "backend call" and pass the context to it. We then create a request to our backend server, whose location is defined in an env variable and inject our context into that request - we'll see how that context is used in the backend in a bit. Finally, we make the request, get the status code, and output a confirmation message. Pretty straightforward!

A couple of things to note further:

Now, let's look at our backend.

Much of the code here is very similar to the frontend - we use the same exact main() and initTracer() functions to run the server and initialize tracing.

The mainHandler() function does look quite different. Here, we extract the span context from the incoming request, create a new request object using that context, and create a new span using that request context. We also add an event to our span for explicit labeling. Finally, we return "OK" to the caller and close our span. Again, I could have used defer span.End() instead of doing it explicitly.

Note the difference between span context and request context. This is specifically relevant when accepting incoming context and using it to create child spans. For further exploration of these two, take a look at the relevant documentation from OpenTracing.

Now that we've seen how to implement tracing instrumentation in our code, let's take a look at what this instrumentation creates. We can run both frontend and backend locally after setting the relevant environment variables for each and using gcloud auth login to log in to Google Cloud. Once we do that, we can hit the frontend on http://localhost:8080 and issue a few requests. This should immediately result in traces being written to Stackdriver: 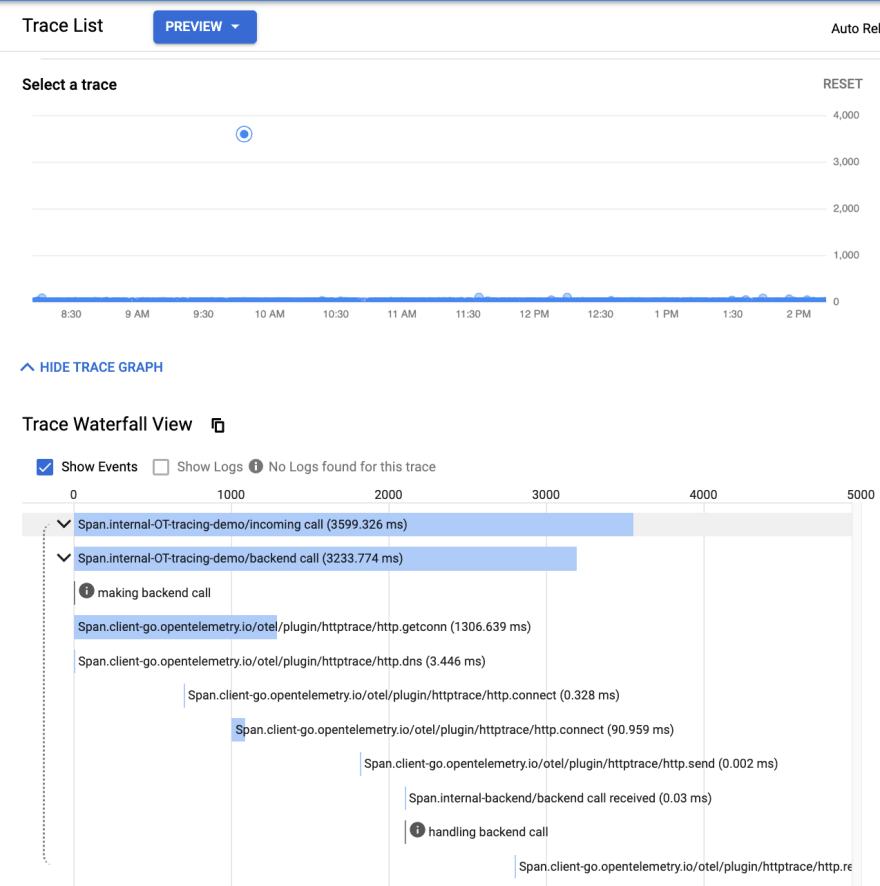 You can see the span names we specified in our code and the events we added for clearer labeling. One additional thing I was pleasantly surprised by is that OpenTelemetry explicitly adds steps for the HTTP/networking stack, including DNS, connecting, and sending and receiving data.

I greatly enjoyed attempting to reproduce the work I did in OpenCensus with OpenTelemetry and eventually found it understandable and clear, especially once I was pointed to the tracer.Start() method to create child spans. Come back next time when I attempt to use the stats features of OpenTelemetry to create custom metrics. Until then!

Once suspended, yurigrinshteyn will not be able to comment or publish posts until their suspension is removed.

Once unsuspended, yurigrinshteyn will be able to comment and publish posts again.

Once unpublished, all posts by yurigrinshteyn will become hidden and only accessible to themselves.

If yurigrinshteyn is not suspended, they can still re-publish their posts from their dashboard.

Once unpublished, this post will become invisible to the public and only accessible to Yuri Grinshteyn.

Thanks for keeping DEV Community 👩‍💻👨‍💻 safe. Here is what you can do to flag yurigrinshteyn:

Unflagging yurigrinshteyn will restore default visibility to their posts.