A word of warning

This post is highly opinionated and written using a highly impolite wording and grammar. Any feedback(with good arguments) is well received.

One of the best practices while developing software, now recognized everywhere, is to use any kind of source control management tool to keep your code, its time-line, and versioning.

Nevertheless the organization of the SCM repos is still open to interpretation by whoever is using it. Most of the time multiple developers have their own ideas on how to leverage the different features a SCM tool brings to the table (branches, tags, naming, etc).

In this post I will cover my mental models of two different strategies that try to standardize branching.

Arguably the most known branching strategy to manage branching in git-the stupid content tracker(yes, that's the full, real, name of git). In this strategy, there will be a set of 2 persistent branches, each with its specific purpose:

I can hear you already asking "Then, where the hell do I work and commit my code!?". Well you will work on temporary/transient branches, and depending on what type of work you are doing you'll select the correct branch.
The usual temporal branches are:

As described GitFlow is shown as methodical and tries to ensure coordination of the developers by leveraging the use of groups of branches. Its organization and sequential steps give control over what is getting to master/production.

But for me it has several disadvantages:

To be fully honest it seems like a good control strategy to implement whenever a team is using a waterfall methodology and plans cautiously its release schedule.

Trunk based development is called like that because it only has one permanent branch called either master or trunk. This single branch represents the complete history of the project. Even thought some purists insist that this should be only one branch, and no more branches should be created; what trunk based development expects is that no other branch aside from master/trunk should be long living. Ensuring this we can avoid code disparity over time and engage CI/CD practices in a more consistent way. So basically you can create any kind of branch you want/need to organize or isolate your work as long as it is short lived and gets merged into master ASAP.

So the usual way of working(in the teams I've been) is using 3 kinds of branches:

As you can read everything should go back to trunk/master ASAP. This branching methodology enables your team to easily implement CI/CD practices, but to achieve the most from this branching strategy you need a mature self organized team that also uses CI/CD practices. (Everyone should be doing CI/CD TBH).

And I can already see you wondering "Well then how the fork we know what should go into production, is there any vesioning strategy? it could really work using only one branch?". Usually a tag is used for versioning on the master branch and every single commit to that branch can be considered a new version.

So now you have the whole story on one branch, and the versioning as well. E voila, everything you need is on your beloved trunk.

For the sake of using images, here I'll show you a (lazy done) graphical representation of both strategies: 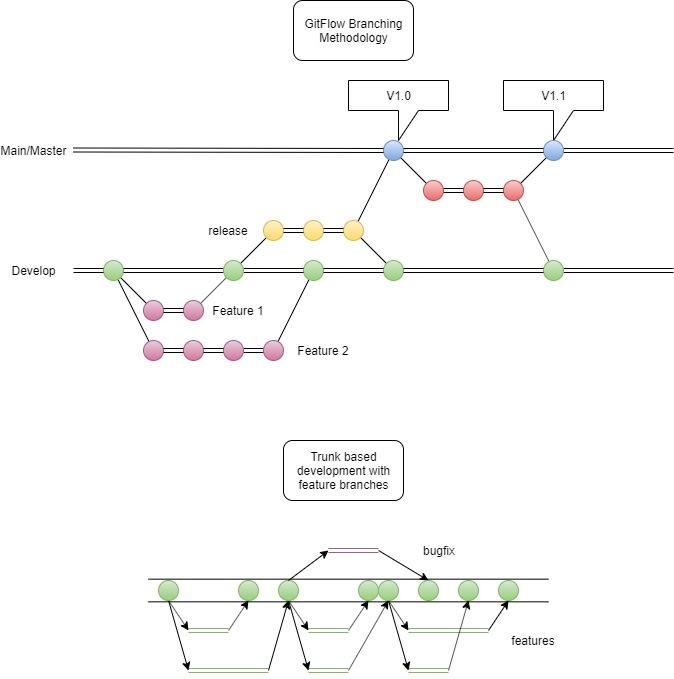 WoW, you got to the end. Thank you for reading, this is the first time I decided to publish anything. I hope you liked this rant about branching and that it may be useful in any way. Make sure to leave a comment on anything you liked, anything you disliked or anything I may be omitting.

From scratch to Create React App on Windows 10