Have you watched this?

Watch these videos as per your convenience and go through this blog to understand (without much mathematical sophistication) how we arrived at this stage.

If you have already watched these videos I totally understand your excitement. This breakthrough came in 2013 after the AlexNet in a paper titled Playing Atari with Deep Reinforcement Learning.

Machine Learning provides automated methods that can detect patterns in data and use them to achieve some tasks. Generally, ML tasks are categorized into:

We will be discussing on RL here, so let's understand an RL problem by imagining a robot mouse maze world. 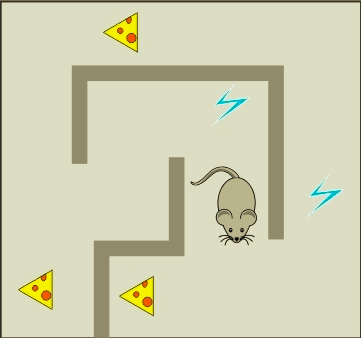 The robot mouse is the agent, Maze is the environment with food at few locations as positive rewards and electricity at other locations as negative rewards. At every moment it can observe the full state of the maze to decide about the actions (such as turn left/right and move forward) to consider next. The goal is to allow our robot to learn on its own to find as much food as possible while avoiding an electric shock whenever possible.

To solve these tasks, ML exploits the idea of the function
approximators. Since the 1950s we know of several types of function approximators such as:

DeepMind pioneered by applying deep learning methods into RL and since then, DRLs have achieved beyond human-level performance across many challenging domains (two of which you saw above). 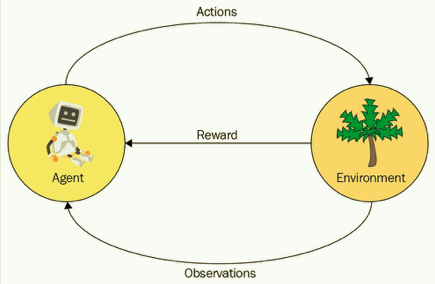 The two major RL entities are:

Agent - is a piece of software that implements some policy. Basically, this policy must decide what action is needed at every time step, given our observations, thus solving a given problem in a more-or-less efficient way.

Actions, Observations and Rewards are the communication channels here.
Actions are things that an agent can do in the environment. It can be either discrete or continuous.

Observations are pieces of information that the environment provides the agent with, like what's going on around them. It may be relevant to the upcoming reward or may not, but it eventually doesn't drive the agent's learning process (as a reward does).

The purpose of a reward is to give agent feedback about its success, and it's an important central concept in RL. Basically, the term reinforcement comes from the fact that a reward obtained by an agent should reinforce its behavior in a positive or negative way.

That's basically the fundamentals of RL. The environment could be an extremely complicated physics model, and an agent could easily be a large neural network implementing the latest RL algorithm, but the basic pattern stays the same: on every step, an agent takes some observations from the environment, does its calculations, and selects the action to issue. The result of this action is a reward and a new observation. The final goal is to achieve the largest accumulated reward over its sequence of actions.

RL methods are mostly categorized as

Model-free methods: means that the method doesn't build a model of the environment or reward; it just directly connects observations to actions (or values that are related to actions). In other words, the agent takes current observations and does some computations on them, and the result is the action that it should take. These methods are usually easier to train.
In contrast,
Model-based methods: try to predict what the next observation and/or reward will be. Based on this prediction, the agent is trying to choose the best possible action to take, very often making such predictions multiple times to look more and more steps into the future.

Policy-based methods: are directly approximating the policy of the agent, that is, what actions the agent should carry out at every step. The policy is usually represented by a probability distribution over the available actions.
In contrast,
Value-based methods: here instead of the probability of actions, the agent calculates the value of every possible action and chooses the action with the best value.

On-policy methods: heavily depend on the training data to be sampled according to the current policy we're updating.
In contrast,
Off-policy methods: the ability of the method to learn on old historical data obtained by a previous version of the agent.

One of the basic RL methods is cross-entropy - a model-free, policy-based, and on-policy method which simply means:

In practice, the agent needs to pass an observation from the environment to the network, get probability distribution over actions (i.e. policy), and perform random sampling using probability distribution to get an action to carry out (similar to ML classification task). At the beginning of the training when our weights are random, the agent behaves randomly. After the agent gets an action to issue, it fires the action to the environment and obtains the next observation and reward for the last action. This experience of our agent is called episodes. Thus, the loop of such episodes continues.

But there are several limitations of the cross-entropy method:

Also, for interesting environments, the optimal policy is much harder to formulate and it's even harder to prove their optimality.

The Bellman Equation of optimality

Richard Bellman proved that the optimal value of the state is equal to the action, which gives us the maximum possible expected immediate reward, plus discounted long-term reward for the next state. The Bellman optimality equation of value V of state S0 is given as

You may also notice that this definition is recursive: the value of the state is defined via the values of immediately reachable states. These values not only give us the best reward that we can obtain, but they basically give us the optimal policy to obtain that reward: if our agent knows the value for every state, then it automatically knows how to gather all this reward.

Now the value of action Q(s, a) which equals the total reward we can get by executing action a in state s is defined as

And finally, we can express Q(s, a) via itself

A general procedure to calculate Q(s, a) is the value iteration algorithm which allows us to numerically calculate the values of actions with known transition probabilities and rewards includes the following steps:

Q-values are much more convenient, as for the agent it's much simpler to make decisions about actions based on Q than based on V. For Q, to choose the action based on the state, the agent just needs to calculate Q for all available actions, using the current state and choose the action with the largest value of Q. To do the same using values of states, the agent needs to know not only values but also probabilities for transitions. In practice, we rarely know them in advance, so the agent needs to estimate transition probabilities for every action and state pair.

In practice, the value-iteration algorithm has several obvious limitations.

To solve the first limitation, we can use states obtained from the environment to update the values of states, which can save us lots of resources. This modification of the Value iteration method is known as Q-learning. But what if those count of the observable set of states is huge (not infinite). For example, Atari games can have a large variety of different screens, so if we decide to use raw pixels as individual states, we'll quickly realize that we have too many states to track and approximate values for. For example, consider the two different situations in a game of Pong where the agent has to act on them differently due to change in single-pixel representing the ball.

As a solution to this problem, we can use a nonlinear representation that maps both state and action onto a value, which can be trained using a deep neural network.

Cut short, There are many tips and tricks that researchers have discovered to make Deep Q-Networks training more stable and efficient. However, tricks like

formed the basis that allowed DeepMind to successfully train a DQN on a set of 7 Atari games and demonstrate the efficiency of this approach applied to complicated environments. Later, at the beginning of 2015, they published a revised version of the 2013 paper, on 49 different games.

The final form of the DQN algorithm used in the paper contains the following steps:

This paper had a significant effect on the Reinforcement Learning field by demonstrating that, despite common belief, it's possible to use nonlinear approximators in RL. This proof of concept stimulated large interest in the deep Q-learning field in particular and in deep RL in general. Since 2015, many improvements have been proposed, along with tweaks to the basic architecture, which significantly improves convergence, stability, and sample efficiency of the basic DQN invented by DeepMind. In January 2016, DeepMind published a paper titled Mastering the game of Go with deep neural networks and tree search which presented the AlphaGo version which defeated European Go Champion Fan Hui. Very conveniently, again in October 2017, they published a paper titled Rainbow: Combining Improvements in Deep Reinforcement Learning which presented the seven most important improvements to DQN reaching SOTA results on Atari Games Arcade. 3 years since, this technology has progressed a lot, has produced some amazing results and shall surely be surprising us in the future.

Once suspended, zohebabai will not be able to comment or publish posts until their suspension is removed.

Once unsuspended, zohebabai will be able to comment and publish posts again.

Once unpublished, all posts by zohebabai will become hidden and only accessible to themselves.

If zohebabai is not suspended, they can still re-publish their posts from their dashboard.

Once unpublished, this post will become invisible to the public and only accessible to Zoheb Abai.

Thanks for keeping DEV Community 👩‍💻👨‍💻 safe. Here is what you can do to flag zohebabai:

Unflagging zohebabai will restore default visibility to their posts.