Angular is the most popular frontend framework to create dynamic web apps. We prepared the top Angular usage statistics to prove this statement and illustrate why devs and users are so fond of this web app development technology.

There will be no comparison of Angular vs most popular frameworks (like React or Vue) since all frameworks are different in their features and suitable for different projects based on their type and functionality. So what we are going to do is to focus on entirely Angular statistics. Let’s start with the brief intro of why it is one of the most famous frameworks these days.

Angular is an open-source framework maintained by Google. Firstly developed in 2010 as an AngularJS, the framework was updated almost every year in its architecture, syntax, and performance to keep Angular run smoothly with the rest of the JavaScript ecosystem. The latest version, Angular 10 was released in June 2020. 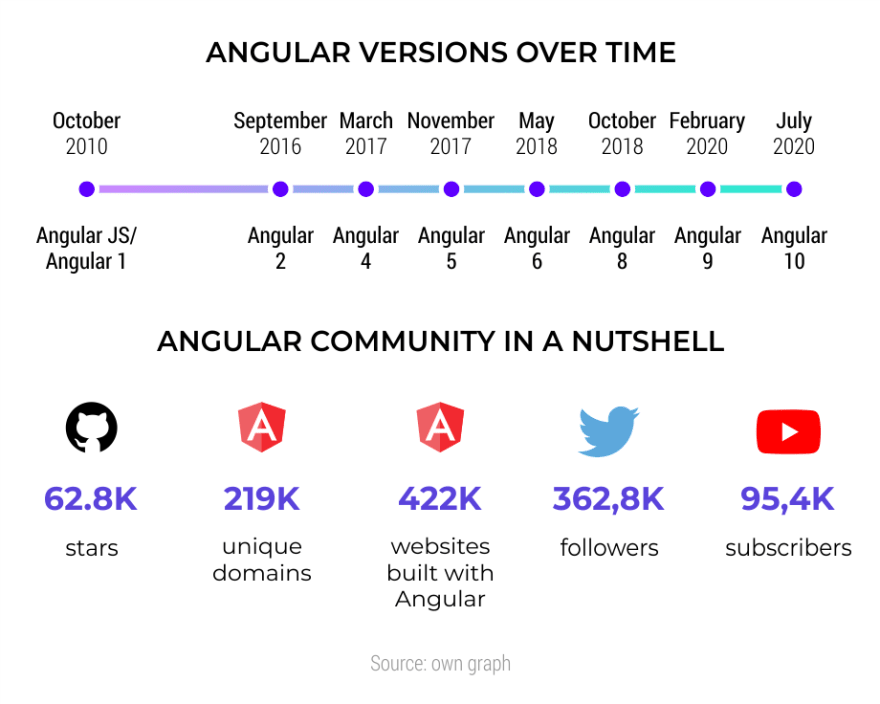 The main benefits of Angular development include:

Angular empowers websites with speed, powerful performance, and meaningful user experience. As an example, check out the official site of the National Basketball Association which was developed using Angular for the front end. The website provides the latest basketball news, scores, games schedules, online store to buy merch and tickets. Such projects are characterized by complex content, such as video streaming, a news feed, constantly updated information of games. Regardless of the rich functionality of the website, it’s fast, user-friendly, and neat.

Angular is a TypeScript-based framework which means easier practice to read the code, fewer bugs, and the self-documentation feature. The universality of the Angular framework makes software engineers keep downloading the Angular package. The number of downloads was exponentially increasing for the last two years. 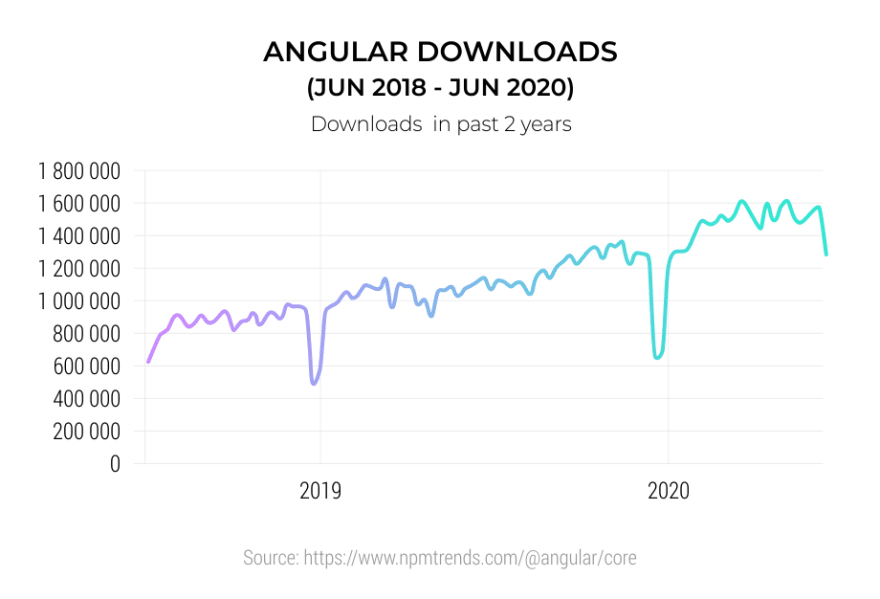 There is a debate that in the war of JavaScript frameworks, React Native will outlive the Angular. However, for the past six months, the Angular package was actively downloaded for software project development. 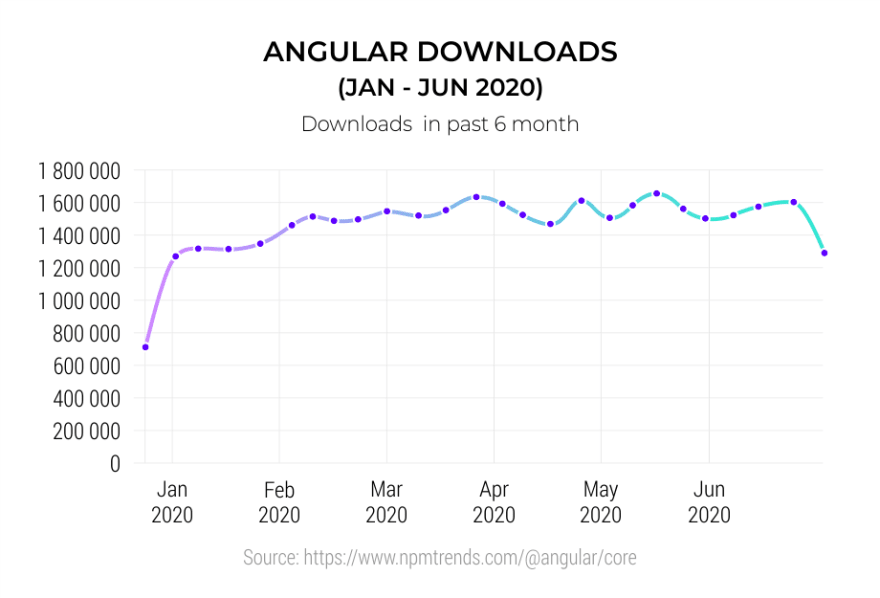 Creating applications on Angular is a promising area and continues to gain popularity, so choosing it as the next milestone in new product development is a good solution. The following Angular stats present downloads per month, per week and per day to trace the more detailed data on the framework usage. 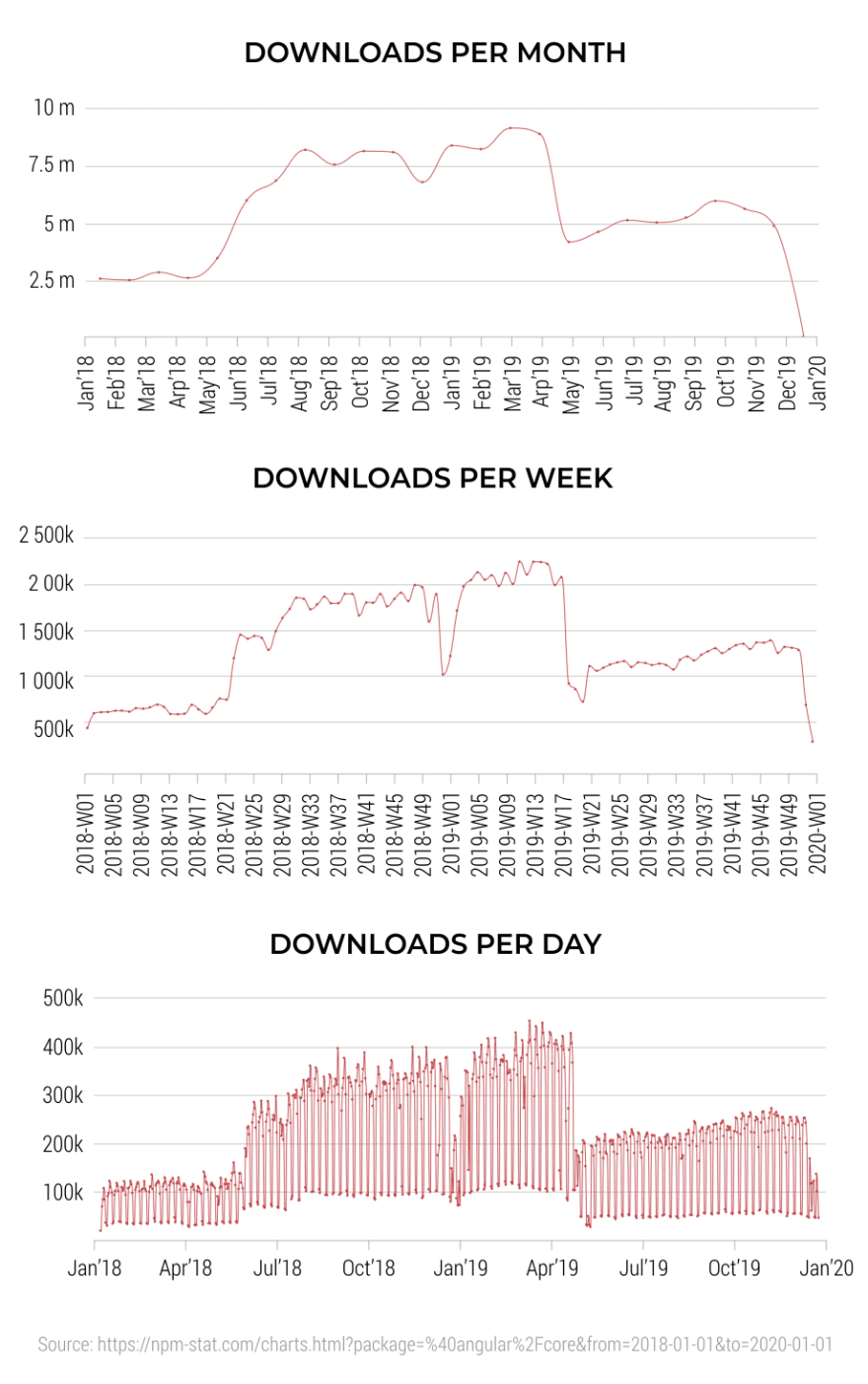 The framework helps to create compound and complex products following the business logic and create more enterprise-like applications. All together with high performance and lightweight capabilities enable to increase the level of Angular-based applications each year.

Web application development using Angular is becoming more and more popular, as evidenced by the rapid growth in the number of websites using this framework. 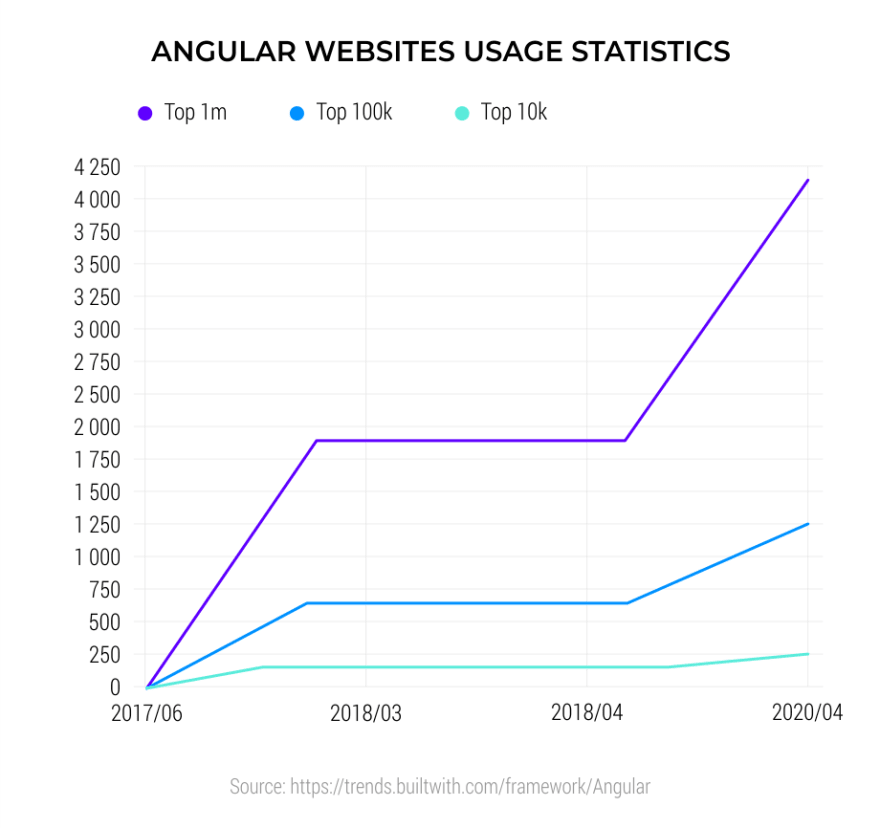 Modern versions of Angular was a complete rethinking of AngularJS. Today, the very first version of Angular is considered to be less flexible and clean compared to the latest versions. However, AngularJS is actively used for web app development. 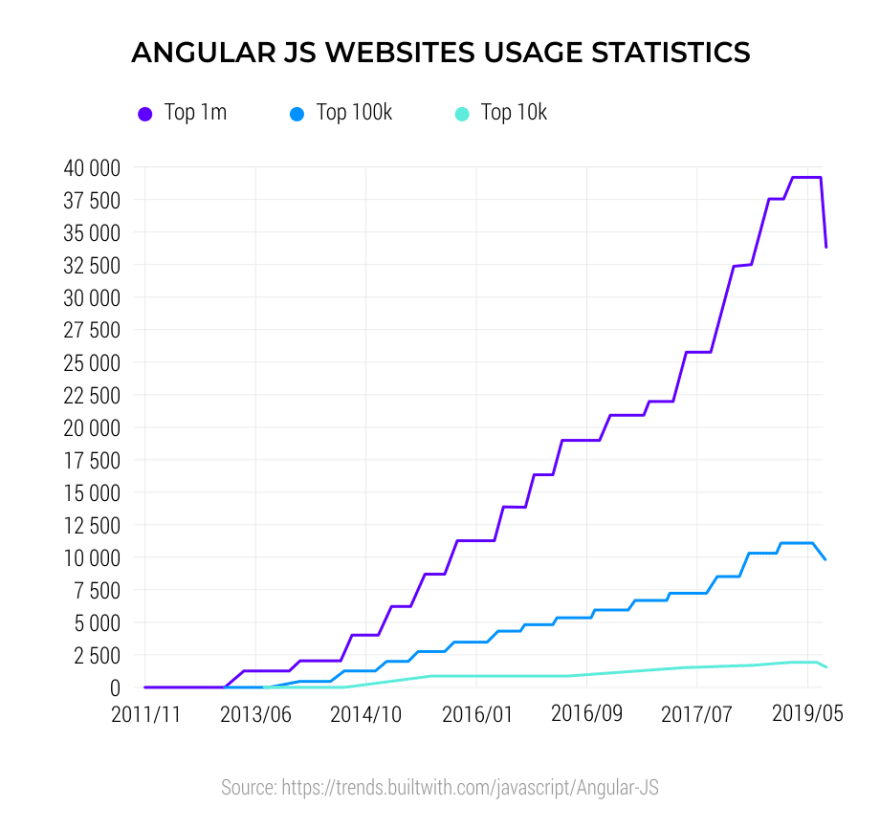 Liked that? We’ve done our best! Go to our blog to find more useful articles.

The US is a leader in using Angular websites. The predominant reason why Angular is so popular in the US is the huge concentration of big enterprises and startups with the focus on software technology business verticals. As a result, Angular is an obvious choice when it comes to complex and scalable projects. 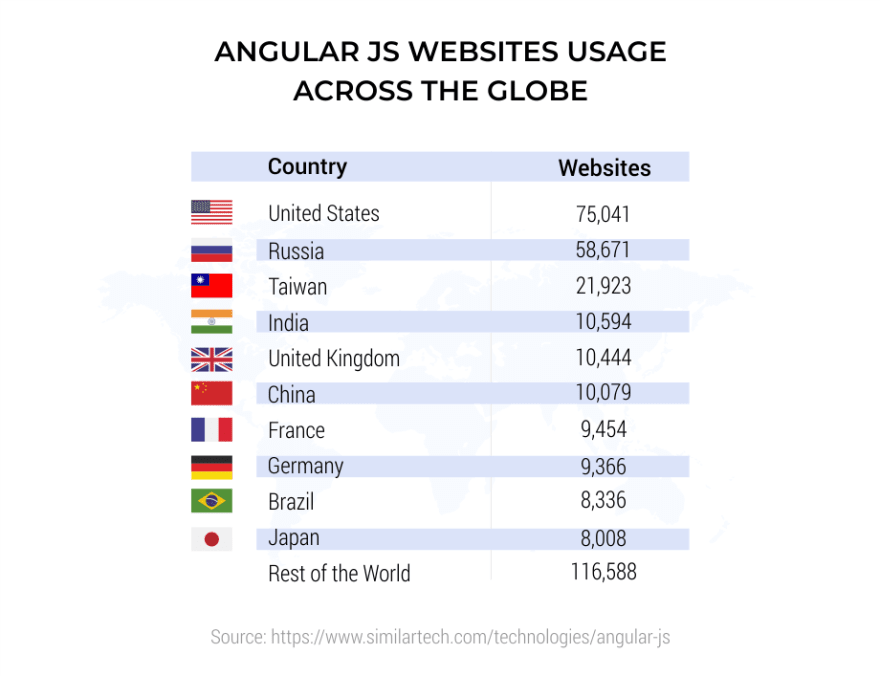 Job statistics helps to identify which technology is on-demand among companies who decide to hire software engineers. As seen from Google Trends data, the current job market suggests learning Angular and React. These technologies are leaders in the skillset of web developers. 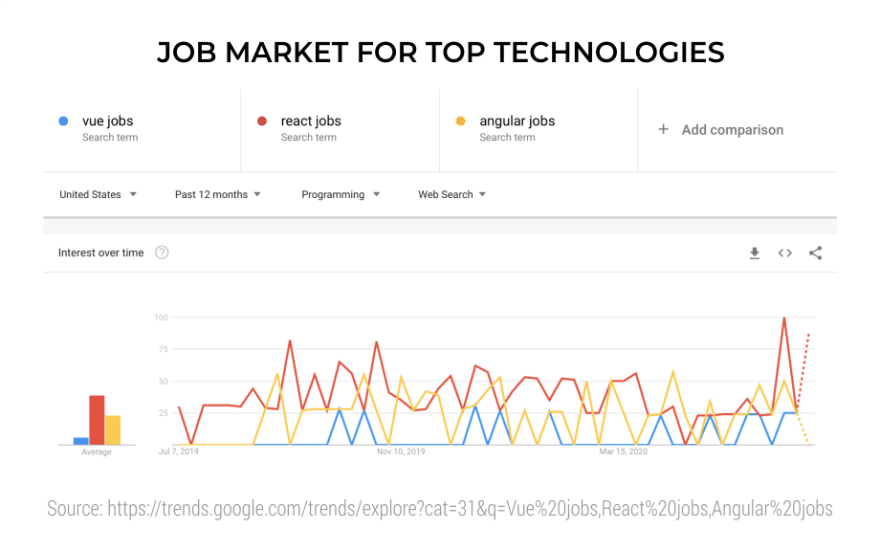 Angular is more suitable for large projects with a rigid structure. It has a lot of ready-made solutions and an efficient system for collecting and storing information. These features simplify the development of large websites and ensure robust performance. 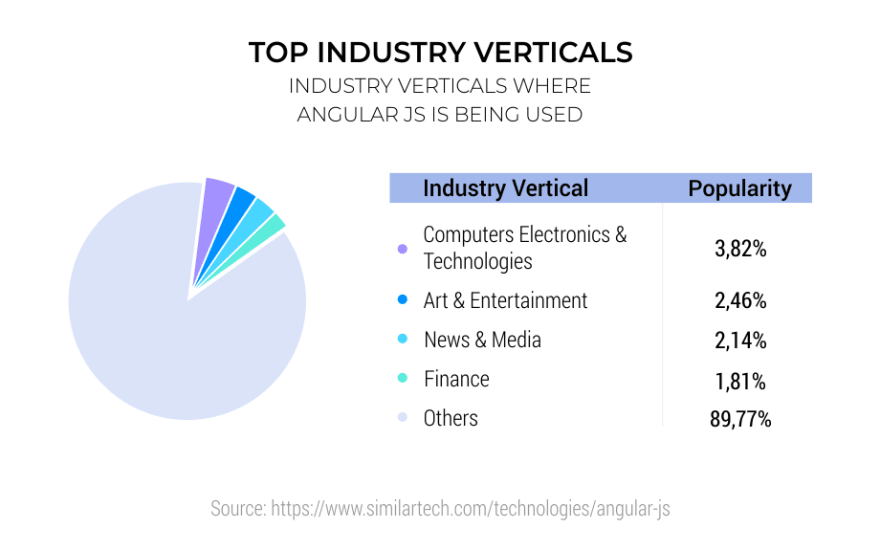 Angular is a modern type of framework that allows organizing an integrated custom approach to solve tasks in a large and complex project. The developer is able to split the application into several component JavaScript files, which will greatly facilitate the testing procedure for subsequent downloads. That is why Angular is a favorite technology for media streaming and social media companies.

The Angular web developer is a popular career choice, as more and more companies want to use this framework. The technology is supported by Google and used in Gmail and YouTube applications. Angular has already been chosen by companies like Lego, PayPal, Upwork. 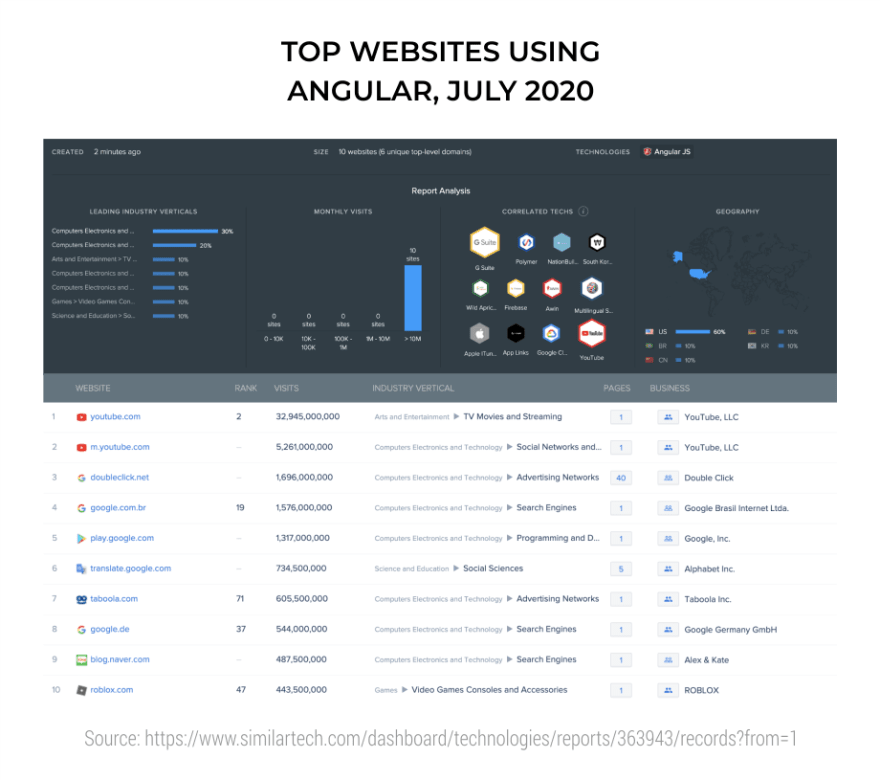 The list of companies that uses Angular is updating every day. There is data on 845,382 companies using Angular. These companies predominantly in the computer electronics and technology, arts and entertainment, and news and media industry verticals. The tech spending of such companies is around $10000 USD while the location mainly in the US. 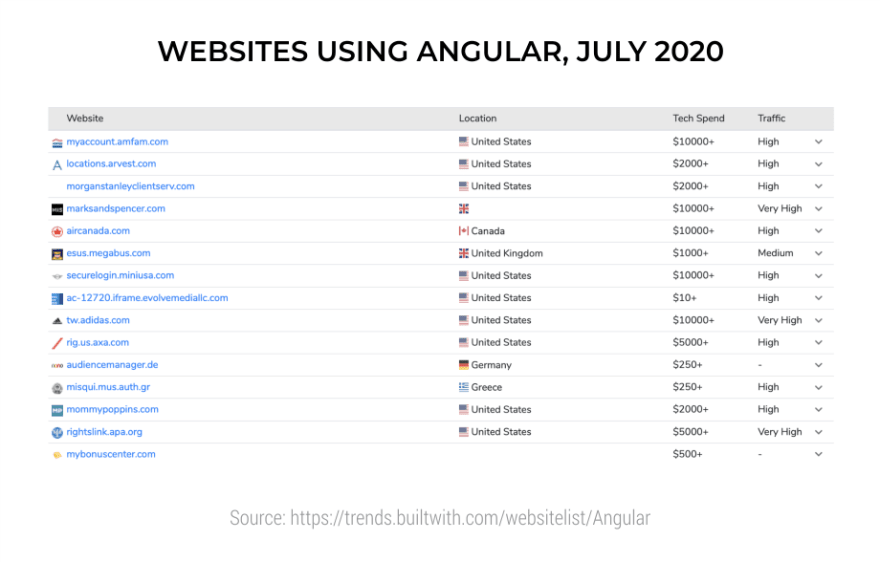 There are twice as many websites with high traffic volume developed with Angular. The report includes the results of 2,564 companies and updates on a daily basis. 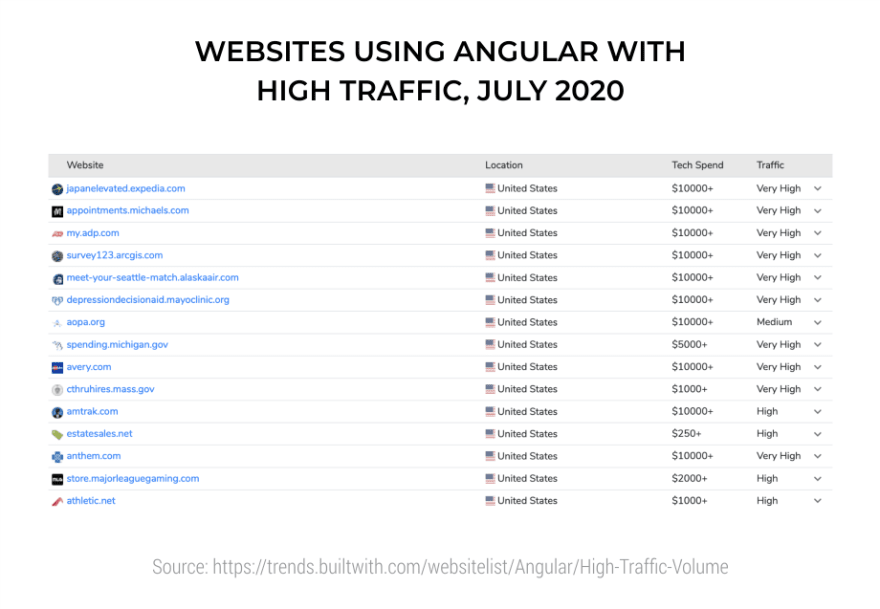 The statistic shows that the most used tools among software developers are ASP.NET while Angular takes the second place. 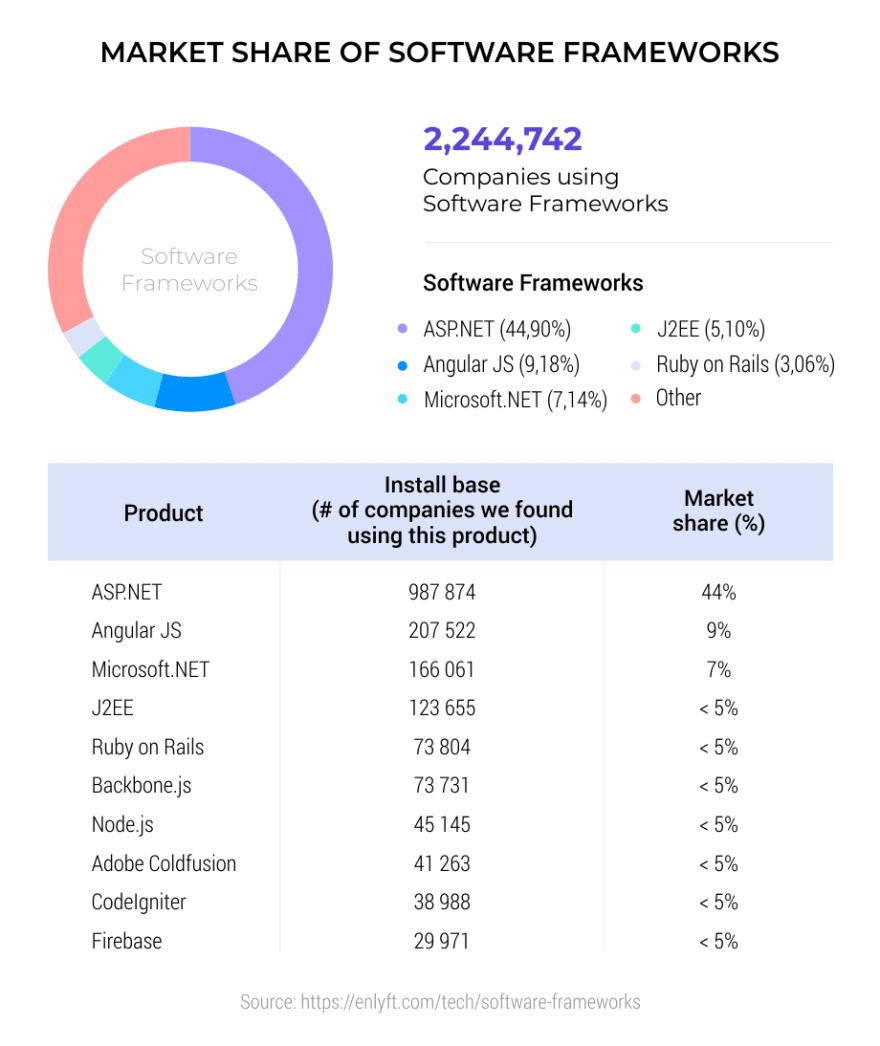 Angular beats React in the website market share, which means that there are more web applications were developed using the Angular framework. Angular is leading technology in Top 10K sites, Top 100K sites, Top 1M sites, while React is a leader in the Entire Web. 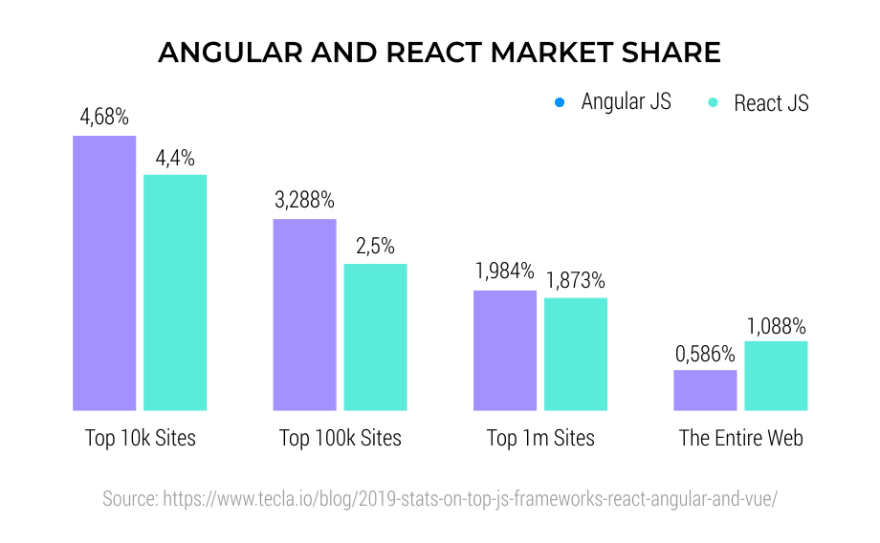 Among the most popular JavaScript libraries, Angular is a leading tool on the market based on the popularity and website traffic.

When focusing on exclusively web frameworks, Angular is in the top three list of choice among the professional developers. 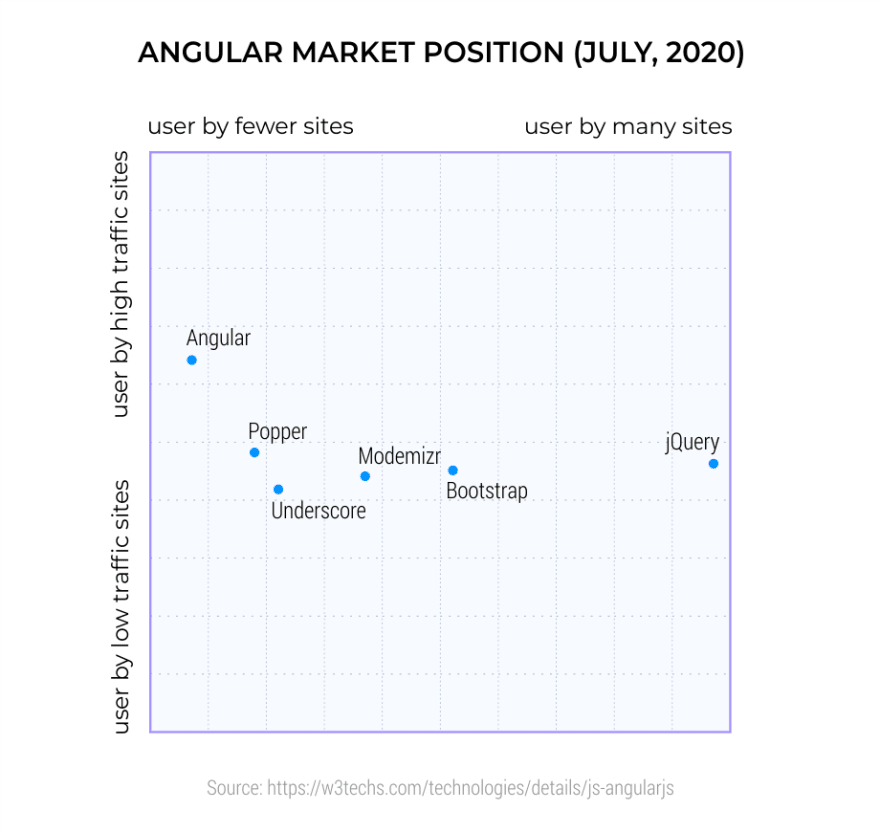 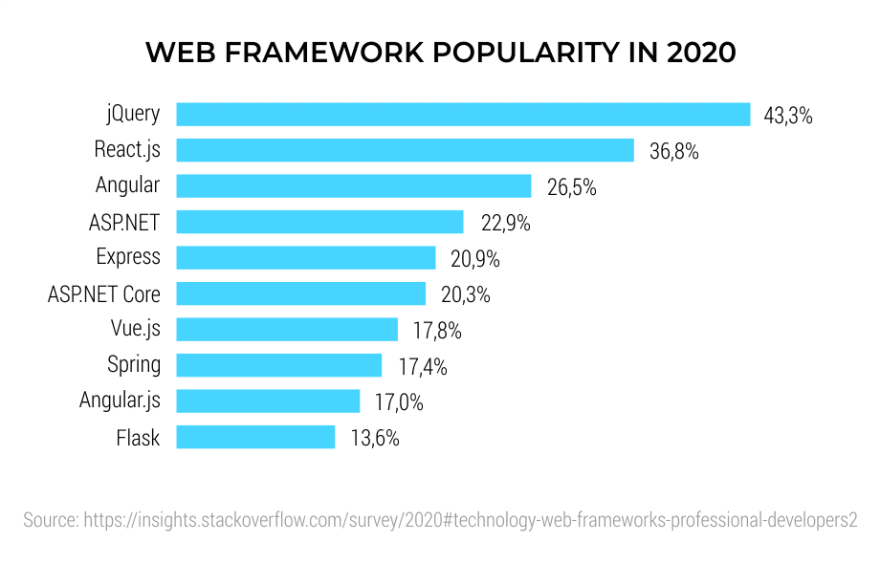 The framework has tons of benefits form the developer’s point of view (accessibility, code splitting, animations, testing, etc..), we choose to show the top reasons why web devs like Angular.

Angular has a vibrant community that helps in the development and improvement of the framework. Precisely, the community assists with custom solutions that can be integrated into the project or resolving complex issues. Additionally, there are plenty of training materials for junior developers.

If you want to know how actively the project is being developed look at the number of commits over time. So, there is more git commits in Angular than in React which means that the framework is constantly updated. 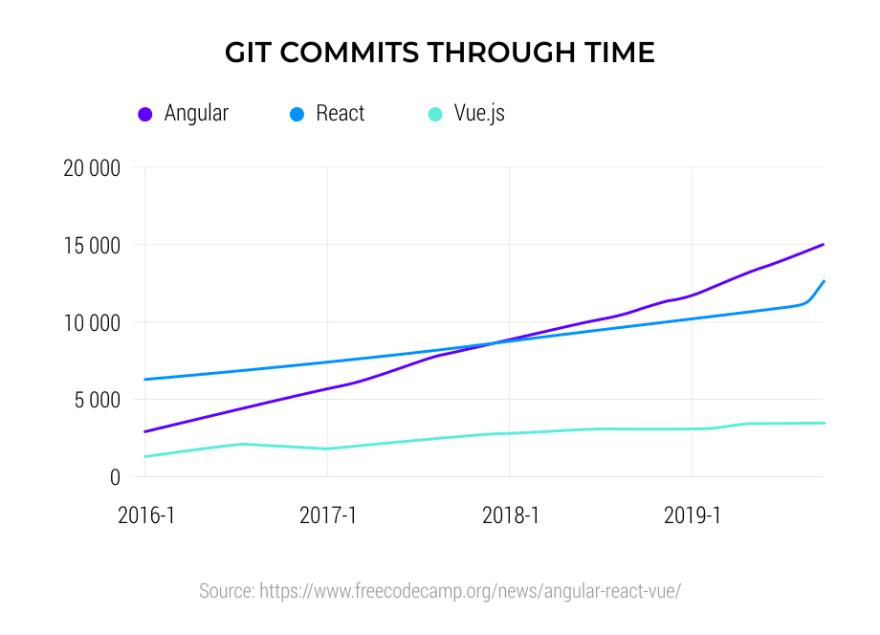 Upwork is a platform for freelancers to find a job. It’s a great example of a complex project developed with Angular. Like any other websites build using the Angular framework Upwork illustrates a smooth navigation system and high webpage performance. 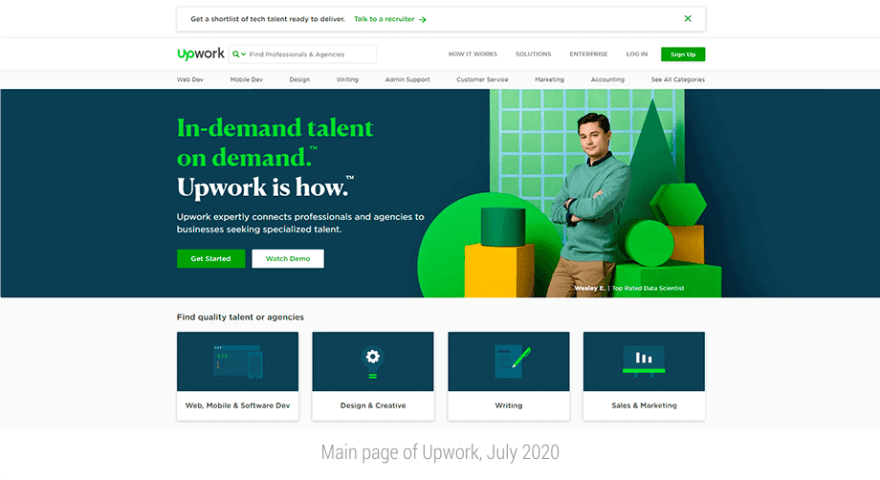 One of the top digital daily newspaper in the UK with more than 400 million monthly visitors. It holds the third place by a number of visitors among national newspapers. The Guardian uses Angular for its user interface. It helps to generate thousands of images and media content without overload the webpage. Angular with the combination of RxJS allows achieving the infinite scroll in search results. 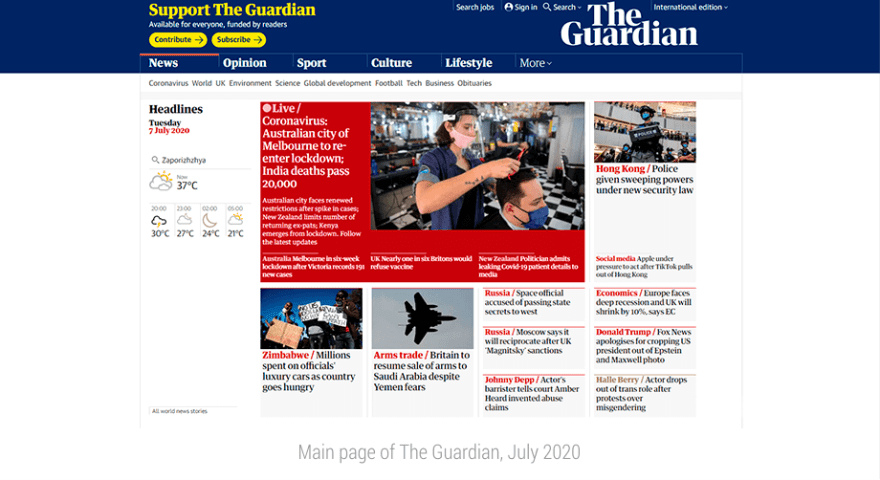 The platform for video hosting and sharing was created with Angular 2. YouTube has one billion users with the same amount of visitors per day. The high volume traffic is not a challenge for platform performance and functionality. 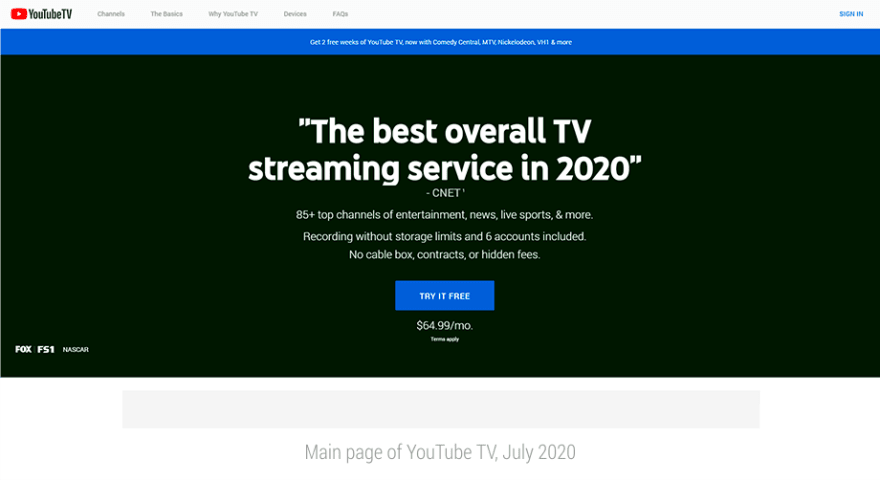 The money transfer online works great due to the Angular framework. Allowing transfers between individuals and companies, PayPal has 305 million active users nowadays. Thanks to the Angular framework the platform has easy authorization feature within a few clicks, ability to complete purchase and money transfers without leaving the web store and also high security protection which is essential for every FinTech apps. 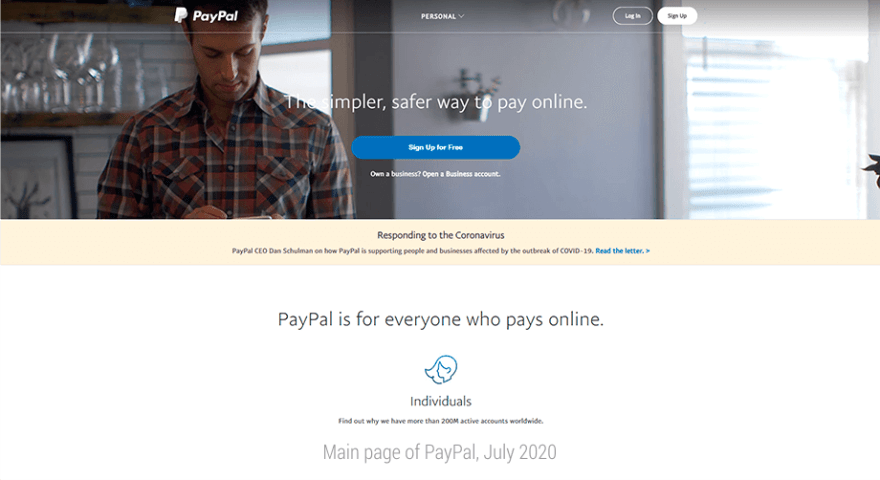 The US satellite channel The Weather Channel is the most visited weather website globally. Built with the Angular, the website provides weather forecasts, a news feed, entertainment, and educational content. Angular solution grants the site with integrated multiple maps, real-time broadcasting, and high-quality images and videos. 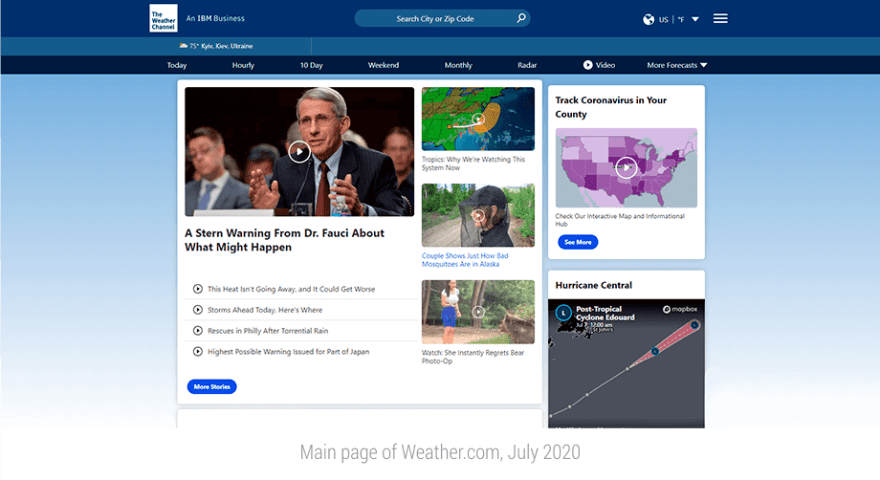 Once suspended, 2muchcoffeecom will not be able to comment or publish posts until their suspension is removed.

Once unsuspended, 2muchcoffeecom will be able to comment and publish posts again.

Once unpublished, all posts by 2muchcoffeecom will become hidden and only accessible to themselves.

If 2muchcoffeecom is not suspended, they can still re-publish their posts from their dashboard.

Once unpublished, this post will become invisible to the public and only accessible to 2muchcoffee.

Thanks for keeping DEV Community 👩‍💻👨‍💻 safe. Here is what you can do to flag 2muchcoffeecom:

Unflagging 2muchcoffeecom will restore default visibility to their posts.