Have you ever wondered why any software package must have a version number? what is the difference between this version 1.0.0 number to this one 1.1.0?

In javascript world, we have multiple package managers such as npm and yarn that handle your dependencies in your application. They provide a bunch of features to make your life easier, you can view these features on their websites.

With each package you installed in your application, there is a version number on each one of them.

What Is Semantic Versioning

Semantic versioning is a set of rules that dictate how version numbers are assigned and incremented. The image below describes what each number means: 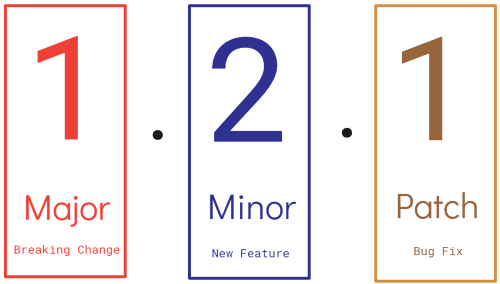 It is important to highlight that it should be safe to update the package if there are any patch/minor changes (backward compatibility). If you find any major change, you have to double-check the package's release notes before upgrading its version.

There are two ways to update your package version, either to do it manually or by using npm commands or yarn commands. If you don't have any package yet you can create a new one by running this command:

Assuming that the current version of your package.json is 1.0.0. If you run this command

so whenever you have done with your feature/bugfix or any other change you can use run these commands to update your package version. but there is a problem here, what if we are working within a team and each one of them will run these commands, what is the final version? how to avoid this conflict? even if you are working alone, trust me life is too short to run these commands every time after finishing your stuff.

semantic release package is designed to automate your releases with many features like:

In my next article, I am going to explain how to set up this package in your project and automate your workflow.

A tl;dr overview of an API

Once suspended, abdelrahmanahmed will not be able to comment or publish posts until their suspension is removed.

Once unsuspended, abdelrahmanahmed will be able to comment and publish posts again.

Once unpublished, all posts by abdelrahmanahmed will become hidden and only accessible to themselves.

If abdelrahmanahmed is not suspended, they can still re-publish their posts from their dashboard.