This blog post demonstrates how you can use an open source solution (connector based) to ingest data from Kafka into Azure Cosmos DB Cassandra API. It uses a simple yet practical scenario along with a re-usable setup using Docker Compose to help with iterative development and testing. You will learn about:

By the end of the article, you should have a working end to end integration and be able to validate it.

Azure Cosmos DB Cassandra API is a fully managed cloud service that is compatible with Cassandra Query Language (CQL) v3.11 API. It has no operational overhead and you can benefit from all the underlying Azure Cosmos DB capabilities such as global distribution, automatic scale out partitioning, availability and latency guarantees, encryption at rest, backups etc.

Your existing Cassandra applications can work with the Azure Cosmos DB Cassandra API since it works with CQLv4 compliant drivers (see examples for Java, .Net Core, Node.js, Python etc.) But, you also need to think about integrating with other systems with existing data and bringing that into Azure Cosmos DB. One such system is Apache Kafka, which is a distributed streaming platform. It is used in industries and organizations to solve a wide variety of problems ranging from traditional asynchronous messaging, website activity tracking, log aggregation, real-time fraud detection and much more! It has a rich ecosystem of technologies such as Kafka Streams for stream processing and Kafka Connect for real-time data integration.

Thanks to its scalable design, Apache Kafka often serves as a central component in the overall data architecture with other systems pumping data into it. These could be click stream events, logs, sensor data, orders, database change-events etc. You name it! So, as you can imagine, there is a lot of data in Apache Kafka (topics) but it's only useful when consumed or ingested into other systems. You could achieve this by writing good old plumbing code using the Kafka Producer/Consumer APIs using a language and client SDK of your choice. But you can do better!

The code and configuration associated with this blog post is available in this GitHub repository - https://github.com/abhirockzz/kafka-cosmosdb-cassandra

Kafka Connect is a platform to stream data between Apache Kafka and other systems in a scalable and reliable manner. Besides the fact that it only depends on Kafka, the great thing about it is the fact that it provides a suite of ready-to-use connectors. This means that you do not need to write custom integration code to glue systems together; no code, just configuration! In case an existing connector is not available, you can leverage the powerful Kafka Connect framework to build your own connectors.

There are two broad categories of connectors offered by Kafka Connect:

In this blog post, we will be using the open source DataStax Apache Kafka connector which is a Sink connector that works on top of Kafka Connect framework to ingest records from a Kafka topic into rows of one or more Cassandra table(s).

At a high level, the solution is quite simple! But a diagram should be helpful nonetheless. 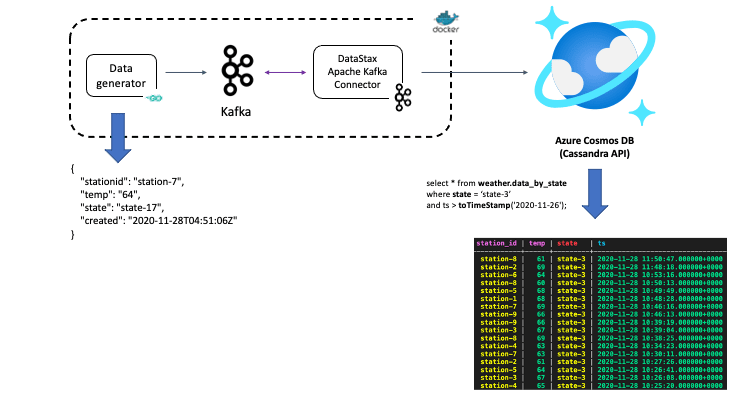 Sample weather data continuously generated into a Kafka topic. This is picked up by the connector and sent to Azure Cosmos DB and can be queried using any Cassandra client driver.

Except Azure Cosmos DB, the rest of the components of the solution run as Docker containers (using Docker Compose). This includes Kafka (and Zookeeper), Kafka Connect worker (the Cassandra connector) along with the sample data generator (Go) application. Having said that, the instructions would work with any Kafka cluster and Kafka Connect workers, provided all the components are configured to access and communicate with each other as required. For example, you could have a Kafka cluster on Azure HD Insight or Confluent Cloud on Azure Marketplace.

Here is a breakdown of the components and their service definitions - you can refer to the complete docker-compose file in the GitHub repo.

The debezium images are used to run Kafka and Zookeeper. They just work and are great for iterative development with quick feedback loop, demos etc.

To run as a Docker container, the DataStax Apache Kafka Connector is baked on top of an existing Docker image - debezium/connect-base. This image includes an installation of Kafka and its Kafka Connect libraries, thus making it really convenient to add custom connectors.

The Dockerfile is quite compact. It downloads the connectors and unzips it to appropriate directory in the filesystem (plugin path) for the Kafka Connect framework to detect it.

Finally, the data-generator service seeds randomly generated (JSON) data into the weather-data Kafka topic. You can refer to the code and Dockerfile in the GitHub repo

Let's move on to the practical aspects! Make sure you have the following ready before you proceed.

The next sections will guide you through:

Using the Azure portal, create the Cassandra Keyspace and the tables required for the demo application.

That's it for the database part! It's time to start up other components.

Since everything is Docker-ized, all you need is a single command to bootstrap services locally - Kafka, Zookeeper, Kafka Connect worker and the sample data generator application.

It might take a while to download and start the containers: this is just a one time process.

To confirm whether all the containers have started:

The data generator application will start pumping data into the weather-data topic in Kafka. You can also do quick sanity check to confirm. Peek into the Docker container running the Kafka connect worker:

Once you drop into the container shell, just start the usual Kafka console consumer process and you should see weather data (in JSON format) flowing in.

Copy the JSON contents below to a file (you can name it cassandra-sink-config.json). You will need to update it as per your setup and the rest of this section will provide guidance around this topic.

Here is a summary of the attributes:

The value for ssl.keystore.path should not be updated since it points to a path inside the Docker container of the Kafka Connect worker. It goes without saying that, this would be different for a production grade deployment where you would have to update the Docker container to add your certificate etc.

Take a look at the following mapping attributes:

Let's break it down:

Check out https://docs.datastax.com/en/kafka/doc/kafka/kafkaMapTopicTable.html for details

Although the connector provides sane defaults, you can pass in the Java driver properties as connector configuration parameters. The Java driver uses 500 ms as the default value for the init-query-timeout parameter (which is quite low in my opinion), given the fact that it is used as "timeout to use for internal queries that run as part of the initialization process" (read more here https://docs.datastax.com/en/developer/java-driver/4.2/manual/core/configuration/reference/)

I did face some issues due to this and was glad to see that it was tunable! Setting it to 5000 ms worked for me but it can probably be set slightly lower and it would still work just fine e.g. 2000 ms

Please leave the other attributes unchanged

For more details around the configuration, please refer to the documentation - https://docs.datastax.com/en/kafka/doc/kafka/kafkaConfigTasksTOC.html

You can now query data in the tables. Head over to the Azure portal, bring up the Hosted CQL Shell for your Azure Cosmos DB account.

Check the data_by_state and data_by_station tables. Here are some sample queries to get you started:

To stop the containers, you can:

You can either delete the keyspace/table or the Azure Cosmos DB account.

To summarize, you learnt how to use Kafka Connect for real-time data integration between Apache Kafka and Azure Cosmos DB. Since the sample adopts a Docker container based approach, you can easily customize this as per your own unique requirements, rinse and repeat!

The use case and data-flow demonstrated in this article was relatively simple, but the rich Kafka Connect ecosystem of connectors allows you to integrate disparate systems and stitch together complex data pipelines without having to write custom integration code. For example, to migrate/integrate with another RDBMS (via Kafka), you could potentially use the Kafka Connect JDBC Source connector to pull database records into Kafka, transform or enrich them in a streaming fashion using Kafka Streams, re-write them back to a Kafka topic and then bring that data into Azure Cosmos DB using the approach outlined in this article. The are lots of possibilities and the solution will depend on the use case and requirements.

You would obviously need to setup, configure and operate these connectors. At the very core, Kafka Connect cluster instances are just JVM processes and inherently stateless (all the state handling is offloaded to Kafka). Hence, you've a lot of flexibility in terms of your overall architecture as well as orchestration: for example, running them in Kubernetes for fault-tolerance and scalability!

If you want to explore further, I would recommend:

Securing your Load Balancer with CloudFront

SCSI vs NFS – Which Protocol to Use for Shared Datastores?