Hi Everyone, I'm going to starting a mini series of articles about C++ Programming concepts that you may be using in your projects. Today's topic is: Arena Allocation.

Edit: Some ambiguous information has been cleared up

Memory management is a pain, isn't it?

When working in garbage collected languages such as Java or Go, you may be mostly free from dealing closely with memory but in languages like C and C++, memory usually causes a lot of problems, especially since you have a lot of power to manipulate it.

So what's the best allocator?

Instead of allocating pointers using malloc or new, we can create our own allocator known as the arena allocator.

This kind of allocation involves allocating a large chunk of memory before the logic of your program executes, for example, 20 GiB of memory. Wait, hold up, this sound completely unreasonable right? Yes, it is, but the operating system knows this too, so it allows overcommitting memory.

NOTE: Windows doesn't have the same ability to overcommit memory, rather large amounts of memory can be reserved and then requested

When you have your large amount memory allocated, what do you do with it?

Generally the block of memory can be separated into chunks, known as a memory pool, and parts of the program may be assigned dedicated amounts of memory. This is the approach of a pool allocator.

For simplicity sake, a arena allocator is usually implemented with allocations done linearly.

Why would you use arena allocation? 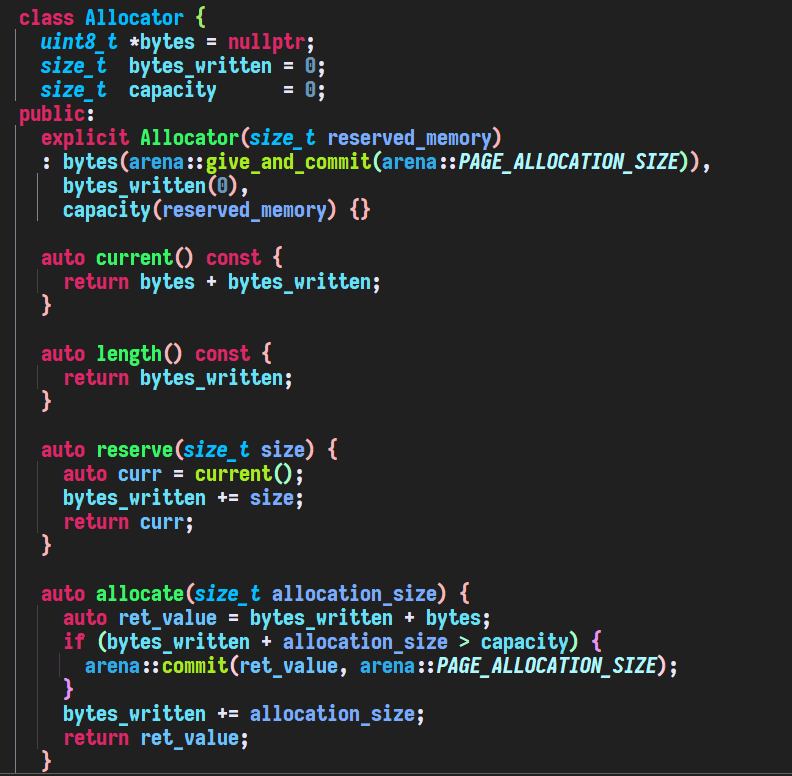 The way this is setup is pretty generic, it allows me to create multiple allocators for different parts of my program.

If you wanted to distribute your memory instead of allocating it linearly, you could do as follows:

This is how the large pool of memory can be distributed and is useful if you know which part allocates more memory.

Arena allocation is just another tool in the box that will help you advance your knowledge of low-level programming in C++. Be sure to understand how your specific program works before choosing this allocation method. Understanding allocators behind the scenes will help you in general for any kind of endeavor and I hope you learned something from this.

If you look back, the article has removed some confusing language and it is no longer called "flexible". I understand that you say arena allocation pretty much useless, but the point is to talk about this kind of allocator, it's interesting to know that is not used in many places but it is still useful enough to learn about in an article which as you say, taught to "fledgling C programmers". I never explicitly state in the article that arena allocation vastly better or worse than other allocators I only list it's benefits and I technically give an example of use case in compilers. Many people I know who are also developing their language using compilers allocate large chunks using either pools of memory or arena allocation and I use it in my own compiler. Not to say that you don't see it too often, but I see it as a useful data structure to understand in C++ and to be able to understand it you need to get off the basics.

"But at this point you are selling, roller skates as a robust and flexible off-roading vehicle that everyone else is too dumb to use."

The purpose of this article is to inform, not talk about whether it is better or worse to use practically. Learning arena allocation is important to understanding how allocators can work and is good for programmers getting into this space. I hope you understand that this article is not designed to misinform about the "wonders of arena allocation", however, it is designed to list some reasons to use this and how to implement this type of allocation.

If you have any further questions on this article, feel free to let me know.

Once suspended, aboss123 will not be able to comment or publish posts until their suspension is removed.

Once unsuspended, aboss123 will be able to comment and publish posts again.

Once unpublished, all posts by aboss123 will become hidden and only accessible to themselves.

If aboss123 is not suspended, they can still re-publish their posts from their dashboard.

Once unpublished, this post will become invisible to the public and only accessible to Ashish Bailkeri.

Thanks for keeping DEV Community 👩‍💻👨‍💻 safe. Here is what you can do to flag aboss123:

Unflagging aboss123 will restore default visibility to their posts.