Nomad is a distributed job scheduler, orchestrator and monitor. Learn how to install and use it for provisioning your Docker containers.

In this article, I will introduce Hashicorp Nomad, a job scheduling system that can be used to start any application, either as system binaries or Docker container.

Nomad will be the central tool in my infrastrutcture to fulfill the following requirements of my infrastructure@home project:

In essence, Nomad is a distributed job scheduler and job monitor. Nomad is a single Go binary that runs on most architectures, including Linux, ARM and Windows. On each node of your cluster, you start Nomad Servers or Nomad clients. The server is the "brain" of the job scheduling. It has the complete data about all jobs, their allocation, their health status. In a cluster you provide three or five servers so that they replicate the state data to each other and provide automatic failover when one server goes down. Besides keeping state, the primary role of the server is to process incoming job definitions, check how to allocate them in the cluster, and then send this workload to the client. Nomad clients process job allocations: They start the service, monitor the startup phase, and if all goes well, will run the service. All data is streamed back to the servers. Furthermore, the clients collect metrics about the nodes and the jobs.

Nomad can be accessed via CLI, a REST-API or a Web UI. It provides many more features such as versioning job files, moving jobs between nodes, upgrade strategies and much more. In this article. I will only cover features that are relevant for our use cases.

The installation of Nomad follows the same steps as with Consul:

When its correctly installed on all nodes, you can see the status on the console.

Or you can access the Web UI on localhost:4646. 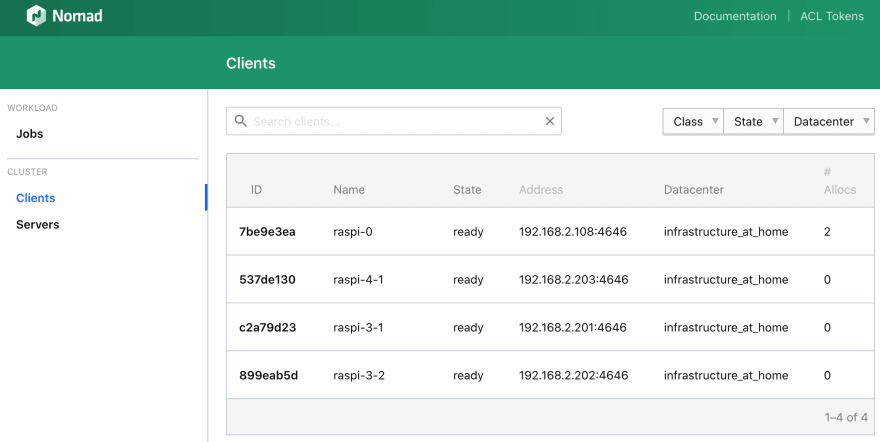 All nodes are connected. Now we can start to write Jobs.

The first job will execute a binary that starts a local web server. Jobs will be created as a job file which defines what to run, how much instances, what ports to open, the health-check of the application, and much more. Jobs can be defined in JSON or in Hashicorp Configuration Language, or short HCL, which is similar to JSON. I will use HCL as well because most of Nomads documentation uses this language.

Here is the job file:

Lets explain the most important parts of the Job description:

That’s a lot to cover! But all entries define important aspects of the jobs. I like to compare the readability of this definitions to Ansible: Its declarative syntax helps you to understand what the job will be doing.

Now, let’s continue and run this job. You should always run one command first: nomad job plan. This gives you an easy overview of what the Job will be doing.

You can see the Job status.

Similar information is also shown in the Web UI. 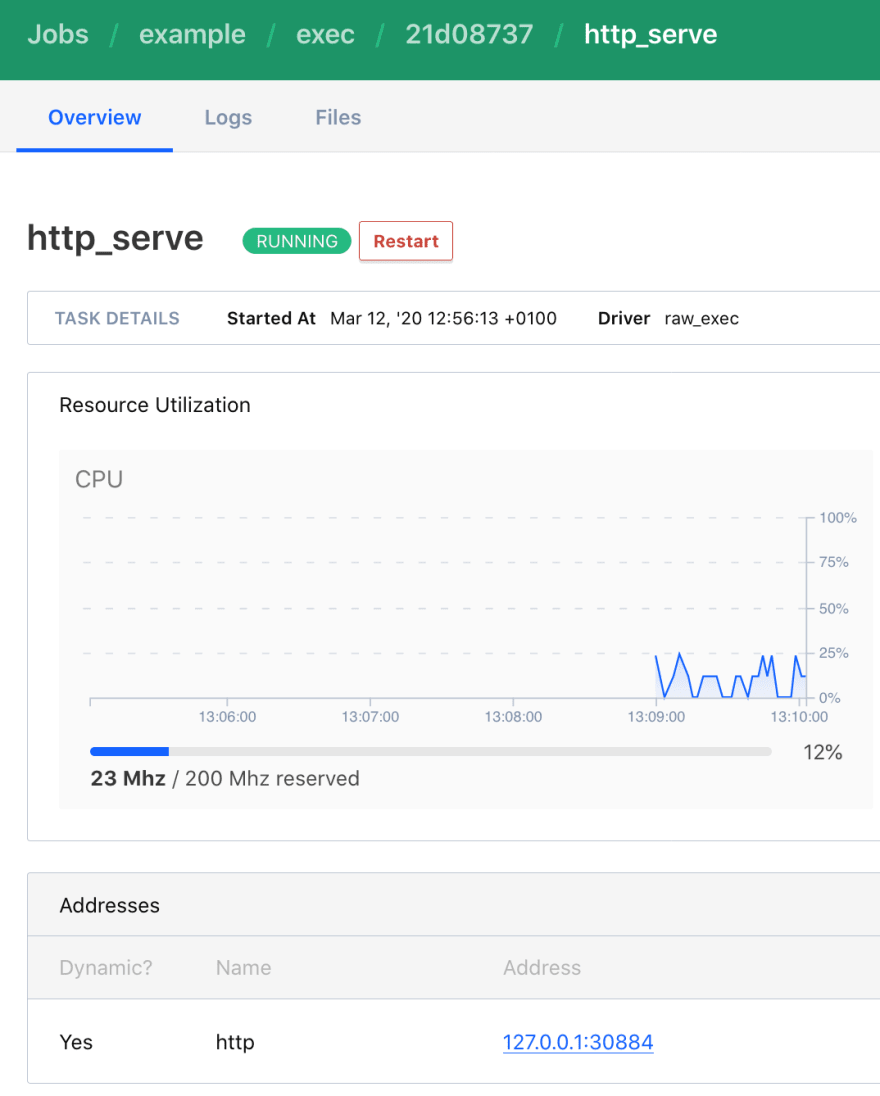 Once the deployment is complete, you can access the webserver and see the files of the local dir. 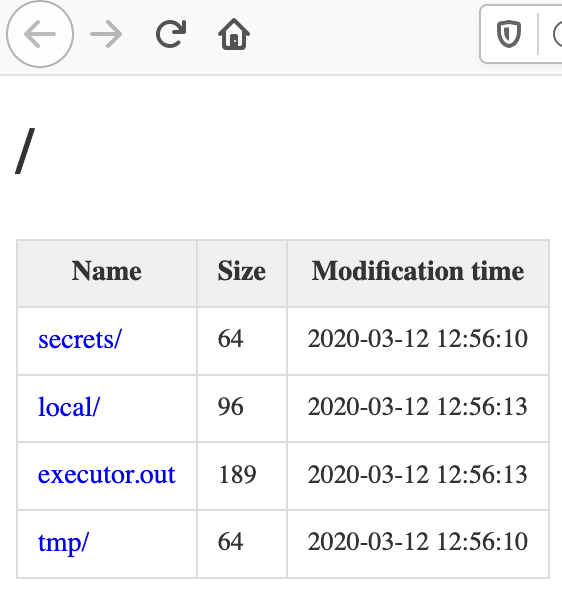 A job file to start a Docker container looks similar, but has other options:

The default behavior of Nomad is to place as many services as possible on the same node - in order to reduce network latency. However, there are cases where you want to target specific nodes, for example nodes which have more performant resources. Or you want to spread the spread the application to different nodes.

Nomad offers the two options to control where the application will be placed.

The first option is affinity. It defines a set of characteristics that the node should have. Nodes which have this characteristics will be choose primarily. You can select from a rich set of node variables, including CPU arch, kernel version, OS name, and Nomad specific environment variables.

For example, if we want the Nginx webservers only to be run in Raspberry Pi which have more than 1GB of memory, we can add the following code:

When we plan this job, we can see that this task will destroy one Nginx that was running on raspi-3-1 (which only has 1GB) and will put this instance instead on raspi-4-2.

The second option is to use spread. Normally, Nomad tries to allocate as many tasks as possible on the same node. With spread you can modify this behavior and express that tasks should be run on different computers.

In this article, I explained how Nomad is the central tool for application management in my infrastructure@home project. Nomads job scheduler can run any binary or docker container dynamically allocated to nodes. We saw one example for executing a simple HTTP server binary, and we saw another example for deploying several Nginx webserver. You can control the allocation with the affinity or spread attributes. In the next article, I will explain how applications can be discovered.