Yield keyword has always been a highly misunderstood keyword in C#, so I will try to explain it with a simple example so hopefully you can understand it as it will help you to get a better performance for your app.

☞Let's first assume that we have a simple .Net Core 3.1 Console application that handles a list of students.

Student Class will have the following structure:

Seems simple right ? don't worry, it will keep that way 😉

☞Next step, create a list of Students in the main method of the console app:

☞So we have a simple function called CreateStudents which takes 1 parameter (Number of students to be created), this function will create students and if the student ID is less than 1000, then it will type it to the screen :

☞GetStudents function just creates a new student list and then fill it with new students and return it.

☞let's run the application and see how it behaves and remember again that we want to type only students with ID less than 1000 ...

☞By setting a breakpoint 🔴 after calling GetStudents function, notice that a Million students are created then the foreach loop is entered to print the first 1000 only, so Do we really need to create a million student to print only 1000 😖 ?
Of course not ..

➥What we want is to prevent creating all million records and adding them to a list and returning that list fully hydrated with a million records, instead would it be great if we could just only return what we want.

So let's apply some modifications to CreateStudents function ...

☞let's run the application now with the same breakpoint set and see what will happen ..

☞let's set another breakpoint in the yield return line inside GetStudents function to see what is really going on and hit Step Over (F10) in Visual Studio to continue the debugging process ... 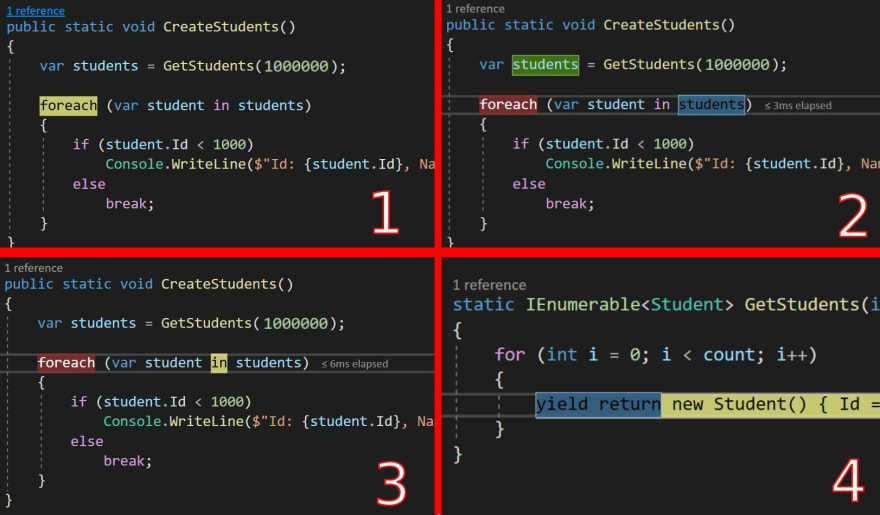 ☞After that we are inside the foreach loop then we enter the if statement and data of the first Student is printed in console ...

☞Continue stepping over using F10 ... you will hit the keyword **in** in the foreach then enter the return yield again ...

➽So what are we really doing here ?

☞Actually we are lazily iterating over the collection of students, we are only requesting one student at a time.

☞In both ways we are getting the same result, which is printing 1000 student on the screen like that 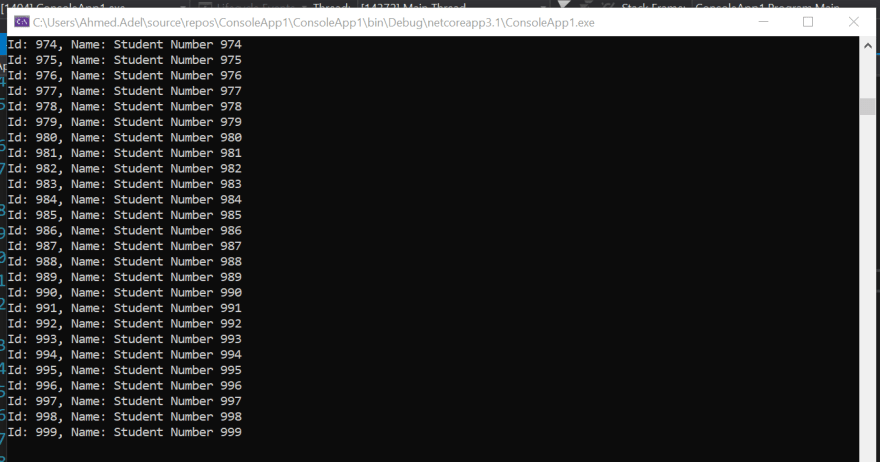 ☞The difference between them is that yield return made a huge improve of performance and memory usage that we will see later..

☞Actually, We are basically creating an iterator which iterates through our collection.
Our foreach loop is just a syntactical sugar for a statement like this

this is kind of what it compiles down to roughly.

➥So, by not having to iterate over the entire collection, we didn't have to actually create a million student in the list, we actually looped through and only created the first 1000
because using yield when we came into this this loop makes students creation one at a time.

● Now, let's test and diagnose the application performance to see if that is really making a difference..

● We will just make simple edits to our code to be able to apply benchmark statistics ...
● We will create a class and let's call it YieldBenchmarks, this class will contain the old version of our functions and the new version using yield return , the class will be decorated with [MemoryDiagnoser] Attribute and the old and new version of CreateStudent functions will be decorated with [Benchmark] Attribute, the code will be as follows

● Now let's run the application in Release mode ...
● Notice that the BenchmarkRunner will run each function multiple time to be able to perform its diagnostics and the result will be like :

This was just a simple clarification for the yield keyword, next , we will go with Async Yield .. Wait for it :)

Once suspended, ahmedadel will not be able to comment or publish posts until their suspension is removed.

Once unsuspended, ahmedadel will be able to comment and publish posts again.

Once unpublished, all posts by ahmedadel will become hidden and only accessible to themselves.

If ahmedadel is not suspended, they can still re-publish their posts from their dashboard.

Once unpublished, this post will become invisible to the public and only accessible to Ahmed Adel.

Thanks for keeping DEV Community 👩‍💻👨‍💻 safe. Here is what you can do to flag ahmedadel:

Unflagging ahmedadel will restore default visibility to their posts.