In this post, we will integrate a React Native app with share on social media feature on iOS using Swift.

If you are not familiar with Native Modules on React Native - and it's ok because this tutorial is for you too! - know that it's most common to integrate a React Native with Objective-C (iOS) and Java (Android), but recently this have changed. With the grew of Swift language, have been popular create Native Modules with Swift for React Native apps on iOS. We still need to use some Objective-C to be able to use Swift, but this thing maybe can change soon.

To follow this tutorial, you will need to have a React Native app, and if you don't have yet, you can start a new one using npx react-native init.

Currently, is not possible to integrate native code with Expo Managed Workflow, but you can use Expo CLI with Bare Worflow if you prefer.

Some features available to use on user phones only can be accessed with native code like Camera, Geolocation, Bluetooth, and more. For iOS, you can choose between Swift and Objective-C to implement these features on your app. Mostly React Native code is written with Objective-C because React Native core uses Yoga lib for layout that works better bridging with Objective-C because is written in C++. But how we can see on documentation we also can bridge our application with Swift to use these functionalities. In this article, we will see how to use Swift to integrate our app with Share with social medias native popover.

The first step, is create the function that you need on native part like an implementation on native apps. We will create a File called RNShare.swift on ios folder from our React Native app. We use RN before module name to indentify that is a Native Module to use on Javascript later.

In RNShare.swift, we need to create class object.

RNShare.swift will have our all functions that we need to expose to Javascript related to this module.

Let's create a function called _open that open the Share window on our app.

This function will open a window to share the message "Hello React Native" with the user's installed social medias. We are simply instancing our window with UIActivityViewController, and adding this controller to our React Native view controller (RCTPresentedViewController) and calling method present to present on the screen.

Our goal is to recieve a dynamic message from Javascript and sends this message to social medias. Then, we can add some logic to recieve params with open function.

Now, we are recieving an options object, with an object that our message will be passed (or whatever parameter you want).

Note that we add @objc for open, requiresMainQueueSetup, and RNShare. This means that this code will be called on Objective-C and you need this declarations to work as expected.

The Objective-C code is the code that able to expose native functions to React Native(Javascript). We need to create a file called RNShare.m that will refer to our Swift functions and will expose it to our bridge with Javascript.

Our class and method are now exposed to Javascript bridge.

To be able to use native methods, we need to use NativeModules from react-native. I like to create a folder called native on source code and every file is a different native module.

After expose native method, let's call our function in a React Native component. 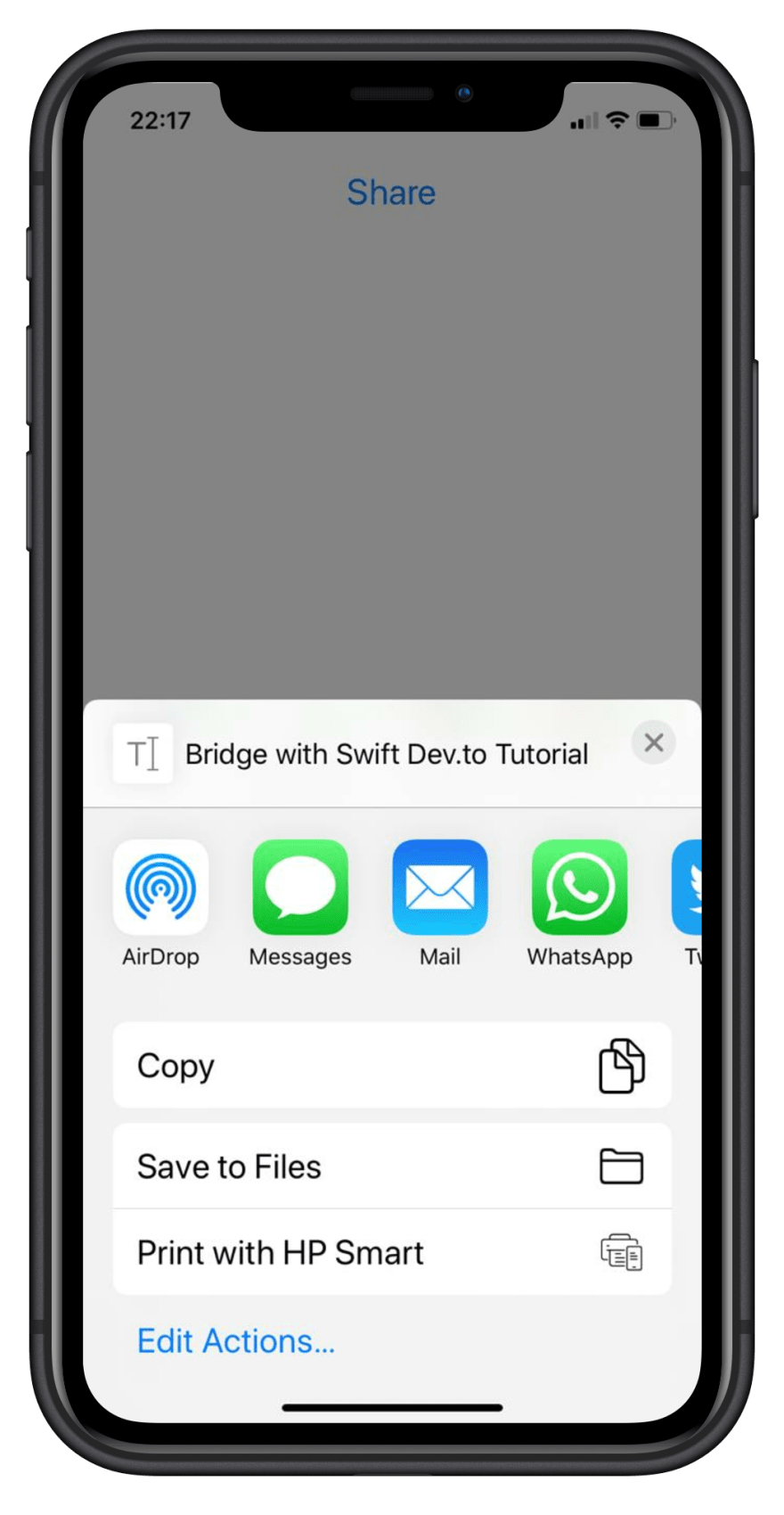 Following this guide, you are able to create whatever methods you want in Swift to expose in your React Native apps. If you want to see more about native module integrations, check awesome-native-modules repository on github to see some native integrations with iOS and Android!

Once suspended, akinncar will not be able to comment or publish posts until their suspension is removed.

Once unsuspended, akinncar will be able to comment and publish posts again.

Once unpublished, all posts by akinncar will become hidden and only accessible to themselves.

If akinncar is not suspended, they can still re-publish their posts from their dashboard.

Once unpublished, this post will become invisible to the public and only accessible to Akinn Rosa.

Thanks for keeping DEV Community 👩‍💻👨‍💻 safe. Here is what you can do to flag akinncar:

Unflagging akinncar will restore default visibility to their posts.