If you're reading this you've probably at least heard a bit about Web Components, a set of web standards that allow us to create our own reusable UI components that can be used in any kind of web application and natively supported in all modern browsers. 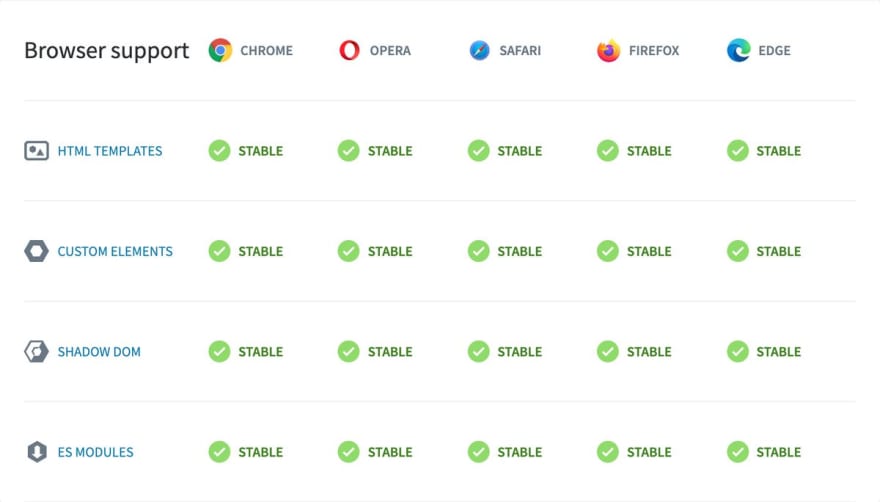 An effort 9 years in the making, but we’ve finally made it.

WebComponents are supported natively in every major browser

What you might not know is where to start, because if there's anything amazing yet terrible about the web development landscape is that where there's an API there will be a bazillion abstractions to "Make it Simpler™".

And of course, Web Components are not the exception, last time I checked I could find around twenty-something different libraries that provide some sort of abstraction to help you create a Web Component.

So, for anyone just trying to begin building Web Components just even finding out where to start is pretty difficult, which is why I'm here.

Throughout this series of articles (yes, it's a series!), I'll cover the following points:

Just bear in mind, this isn't a tutorial per se, I won't be explaining how to build Web Components with each library, I believe that's what the docs for each library are there for to begin with.

The main purpose of this article is to try to help developers who are just starting with Web Components find a way of building Web Components that they feel comfortable with. 😊

To quote Justin Fagnani, one of the members of the Polymer Project which greatly contributed in pushing the Web Components standard:

[...] the big idea with web components is that it shouldn't matter which or even if an approach (to create Web Components) becomes more popular. As long as components interoperate we all win.

So, let's stop with the introduction and start with the juicy stuff.

To avoid repeating what many other articles have mentioned, I won't explain all the standards that make up Web Components, but if you need a reminder I recommend you to check this MDN article.

Now, knowing what the standards are about is cool and all, but what does a vanilla Web Component actually look like?

Here's some sample code for a simple Hello World component, don't worry if you don't fully understand what everything is, we'll go through it in more detail later on. 😉

In this simple code you can see all the Web Components standards in action:

You might think that this code is slightly too cumbersome for what seems to be too little.

And you're right in thinking that, the Web Components standards, at least in their current form, are low-level standards that require you to write code for things that are needed pretty much for all use cases.

This is where the abstractions I mentioned before come in, all of them basically aim to solve the pain points of working with each standard by:

All of these abstractions generally make the overall development experience way more pleasant than working with vanilla web components.

And what's even better is that since most of the final heavy lifting is done by the actual standards the majority of the libraries covered throughout this series won't add even 10kB to your final bundle (after minify/gzip)! 💪

So far, I (hopefully) helped you understand what it takes to create a Web Component and why you probably want to use a library to help you out having a nice experience while doing so.

But let's not forget about the original objective, I'm supposed to be playing cupid here and match you with your perfect library. 💘

And while I mentioned many abstractions the libraries provide over the standards, I believe the one that has the biggest effect on how you actually end up writing the code for your component is the way to define the "class" for your component.

Like I mentioned above, most libraries fall into one of three patterns:

In the following articles, I'll go into more detail about how each pattern works in detail and try to briefly introduce as many libraries as I can that fall into that pattern.

Thank you very much for reading this article to the end, I hope you liked it and keep reading the other articles for this series.

Feel free to leave a comment with any questions or suggestions you have for the rest of the series, especially on what kind of data you would like to hear about from the libraries I'll be introducing.

Once suspended, alangdm will not be able to comment or publish posts until their suspension is removed.

Once unsuspended, alangdm will be able to comment and publish posts again.

Once unpublished, all posts by alangdm will become hidden and only accessible to themselves.

If alangdm is not suspended, they can still re-publish their posts from their dashboard.

Once unpublished, this post will become invisible to the public and only accessible to Alan Dávalos.

Thanks for keeping DEV Community 👩‍💻👨‍💻 safe. Here is what you can do to flag alangdm:

Unflagging alangdm will restore default visibility to their posts.