In programming, the scope of a variable determines its lifetime. The scope describes if a variable, a function or an object is accessible or inaccessible by different parts of the program during runtime. In this article, we will see examples to cover briefly the global, local and block scopes in JavaScript.

Wat are these blocks?

Before diving in the scope categories that exist in JS, we have to define first what a block is. A block is a piece of code inside a set of curly braces {} and groups code statements together. An example of a block could be a function, like this: 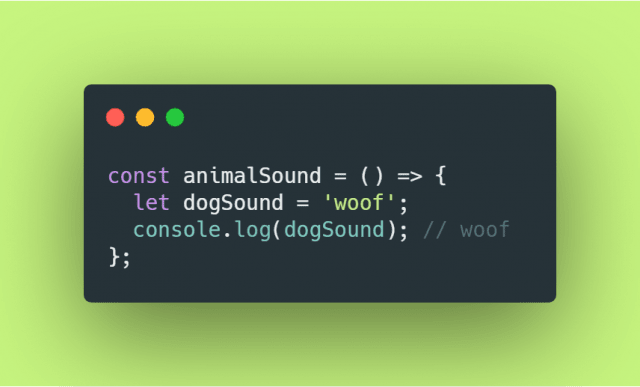 A variable exists inside or outside a block. If a variable is declared outside all functions or curly braces ({}), it exists in the global scope. The global variables can be accessed by any line of code in the program, including inside blocks. 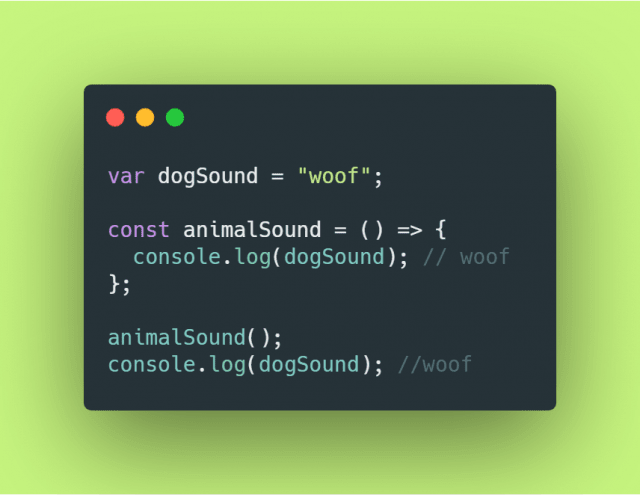 In contrast to global variables, locally scoped ones are only visible within the function they are declared. Each function written in JavaScript creates a new local scope and every variable declared in this scope is a local variable. That means that variables with the same name can be used in different functions. However, any effort to reference a local variable outside its scope will result in a Reference Error:

So far, we’ve seen variables defined with the var keyword. Var can declare a variable either in the global or local scope. The variables that are declared within the block scope are comparable to local ones. They are available within the block that they are defined.

The main difference between the local scope and block scope is that the block statements (e.g. if conditions or for loops), don't create a new scope. So the var keyword will not have an effect, because the variables are still in the same scope.

ES6 introduced block scope by using the let and const keywords. These two keywords are scoped within the block which are defined. 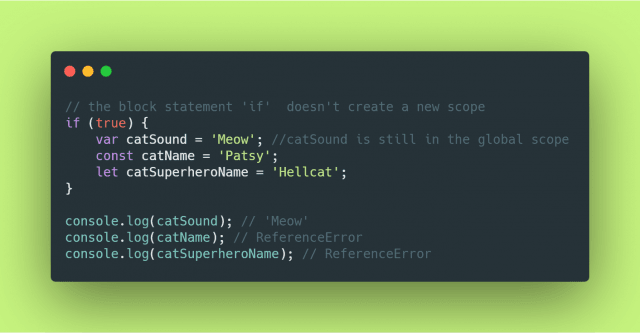 So, why having scopes and limit the visibility of variables? Firstly, security reasons. The variables are only accessible when they are needed. Secondly, the scope solves the namespace collisions problem, which happens when variables with the same name but with different scopes exist. Finally, It will save memory in your code because the block variables will stop to exist after the block finishes running.

JavaScript: A Basic Guide to Scope

Once suspended, ale3oula will not be able to comment or publish posts until their suspension is removed.

Once unsuspended, ale3oula will be able to comment and publish posts again.

Once unpublished, all posts by ale3oula will become hidden and only accessible to themselves.

If ale3oula is not suspended, they can still re-publish their posts from their dashboard.

Once unpublished, this post will become invisible to the public and only accessible to Alexandra.

Thanks for keeping DEV Community 👩‍💻👨‍💻 safe. Here is what you can do to flag ale3oula:

Unflagging ale3oula will restore default visibility to their posts.