All code from this tutorial as a complete package is available in this repository.

This tutorial is available as a video lesson if you prefer that format:

Before we jump in I want to explain quickly a little bit what Notion is.

It's basically an organizational tool that runs in the cloud and supports multiple user collaboration at the same time.

It can be used for anything from organizing daily tasks, keeping track of school schedules, to managing the documentation of large enterprise projects.

Basically if you want to "organize" any kind of information, Notion is a great tool for that.

Recently I discovered that Notion provides an API to read and modify data on your Notion workspace.

They also have fantastic support for simple databases (even relational ones) so I thought it would be fun to try a little app that could use Notion as a quick and dirty CMS, and I had a lot of fun doing it, so I thought I would write up a little tutorial to share the process with others.

I want to be clear that I am absolutely not advocating for the use of Notion as a real database for a production application.

I do not know anything about the actual speed and performance of querying it at any scale, and I also wouldn't trust any critical data on a service that isn't specifically designed to offer a reliability guarantee.

However, for fun little projects I think it's a great option, especially for front end developers who don't have a lot of existing knowledge about databases and just want to get their feet wet.

It can also be a great way to collaborate with less technical folks and allow them the flexibility that Notion offers for creating content, and giving developers the ability to directly reference that content in code.

So without further delay, let's play around with it.

The structure of our project will be:

The reason we need the Node server is because if we were to query directly from our React app, we would have to expose our Notion account credentials and secret/database ID. Anything on the client side is always visible to the user.

By querying on the server we can keep the credentials there, out of reach of the front end, and only provide the database table data itself to the front end.

We'll begin by creating the project directory and React app. We're using Create React App here as it's still the simplest way to get an instant React project up and running with minimal complexity:

Make sure you are able to see the example React app on http://localhost:3000/ before you continue.

Next we are going to create our Notion workspace and database.

You can create an account or login with an existing Google or Apple account. Notion is free to use for an individual. 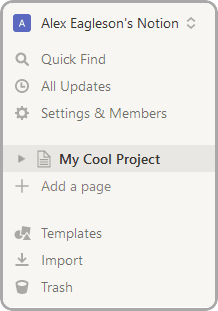 Next we'll create a page where our database will live. My database is going to help me keep track of stuff I want to learn in 2022.

Click anywhere on the "My Cool Project" page and type /page. You'll have te option of creating a new page. Create one and give it an icon. 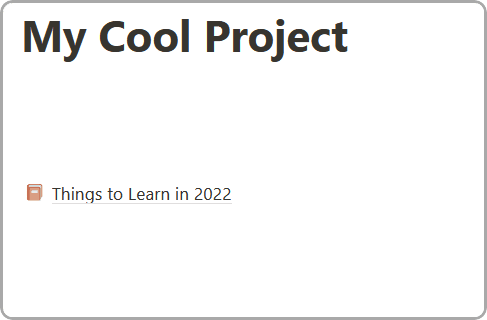 Open your new page. You can give it a cover image at the top. CLick anywhere on the blank page and type /database. You're going to select "Table Database - Inline"

I've made the column headers lowercase on purpose since we will be referring to them with Javascript properties when we query (which are traditionally lowercase). 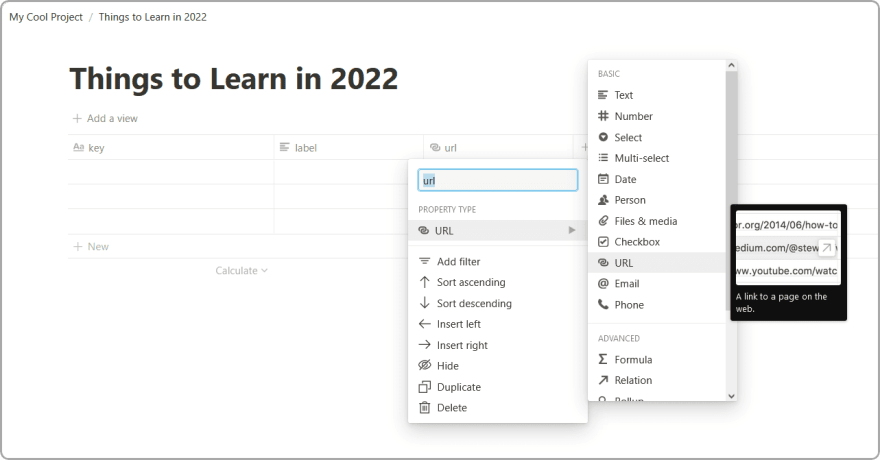 I will be using this database to keep track of the things I want to learn, and a URL link to the resource to learn them. This is super simple but you can come up with anything as complex as you want, we're mostly just here to give an example of how to query this data and display it in an app (or anywhere you like really).

Populate the DB with whatever data suits you best. Here's mine: 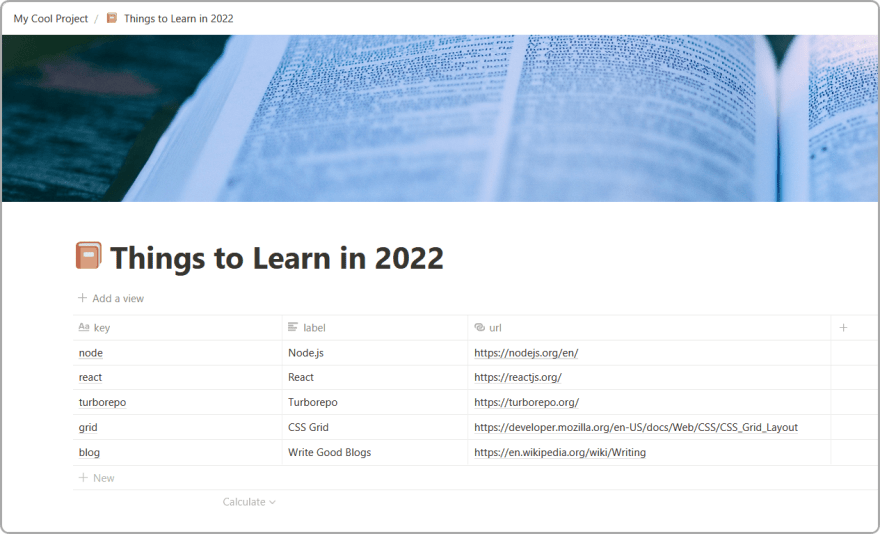 We're next going to spin up a super simple Node server to serve the data. All we need is the http module and the Notion client library from NPM.

Let's begin with just the server and confirm we can query the data before we add the Notion integration:

Go back to the root directory react-node-notion before running these commands:

In case you aren't creating your files from the command line, the above instructions will install the necessary packages and create a server directory and an src directory inside with a server.ts file. Your full directory structure for the entire project should look like:

Your npx tsc --init command will have created a tsconfig.json file. All the defaults are fine, you just need to add one value:

That will output the result of the tsc command into a dist folder with a JS file that you can run.

Give it a try by running:

That says "run typescript and then use Node to run the resulting Javascript file it creates in the output folder".

Navigate back to the sample-app directory and open the src directory. We can delete App.css and the logo.svg file.

We'll update the index.css with some super simple CSS based off this minimalist style.

Now we update the contents of App.tsx. Remove all the default content inside the file (including the imports) and replace it with the following:

We use the Fetch API to query the simple server we just wrote that we made listen on port 8000 and respond on the root domain route /.

So that means to reach that endpoint we need to query http://localhost:8000/. Save and run your app, then press the "Fetch List" button. Open the dev console with F12 and you will see: 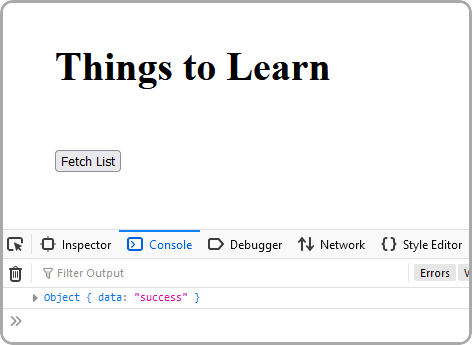 Notice the { data: "success" } response there in the console. Great!

Our React app is connected to our server and we can query basic data. Let's get Notion hooked up.

Before you can query data from your Notion account you need to create an integration that has the necessary permissions. You can configure integrations to have different permissions like read/write/insert depending on who you are sharing the integration secret with.

Go to the following URL:

And click the big [+ New Integration] button on the left.

You can configure and name your integration how you like. For mine I only want to be able to read content from my database, so I am only giving it read permissions and no access to user data:

After you have created the integration you will be provided with a "secret" that gives access to your integration. Keep this handy as we will need it soon:

In addition to the secret, we also need to configure the database itself to be allowed to be read. Go back to your "Things to Learn" database (or whatever you wrote).

At the upper right corner of your database page is a "Share" button. Click it and then click the "Invite" button. You will have the ability to invite your new integration that you created to have access to this database. It will still be private and hidden from the general public. 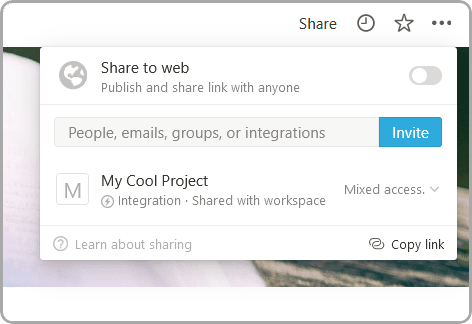 The two values you need to query this database from your Node app are the Notion secret (which you already have) and the database ID. The database ID you can get from the URL when you are looking at your database. The URL will look something like this:

You now have everything you need to query the data. Back to the Node server.

We are going to need a secure place to store our Notion secret and database ID. If we put them in our code they will become visible to anyone who checks the source when we push to a remote repository. To get around this we will store our credentials in a .env. file.

Inside your server directory create two new files (note that both of them are hidden files that are prefix with a . before the filename):

Where the dummy values above are replaced by the values you took from Notion. Remember your secret key does need the secret_ prefix in front of it.

We also want to create a .gitignore file:

This will tell git not to push your secret .env file our your automatically generated dist folder when you commit.

While we're at it let's add a start script for our server that does the tsc build and runs the JS output:

Alright! Now that that is taken care of we just need two packages. One is the official Notion client for Node, and the other is dotenv library that will made it super simple to read your secret and database id values from that .env file:

Note that I have locked Notion client to 0.4.9 as the API may change since this is a relatively new product and I would like this tutorial to work for anyone who uses it in the future. You can try running the latest build however you may need to refer to their documentation and make corrections if anything has changed.

Now we're going to update our server.ts file. We'll do it all at once but I'll add lots of comments to explain everything:

Should be good! We'll start the server with the new script we made in package.json:

A quick jump back into the React app and hit that "Fetch Data" button again. If everything went well you will be greeted with the content of your database in your browser console: 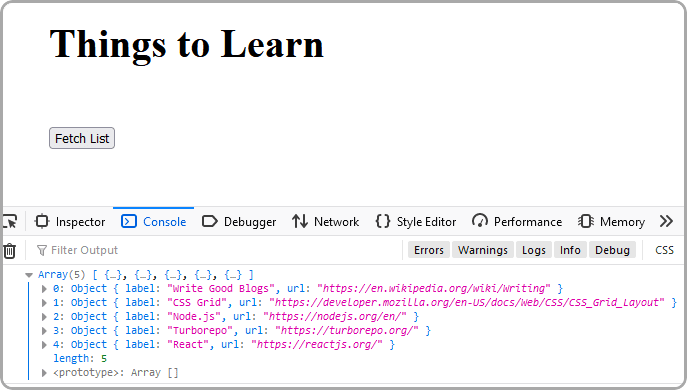 You've now got the data in your React app, you can do whatever you want with it! We could probably wrap up the tutorial here, but let's make one final step of turning the data into an actual list of links:

And with that, a click of the fetch button and we get a nice list of things to do which reflects the state of our Notion database and creates links to the relevant pages. 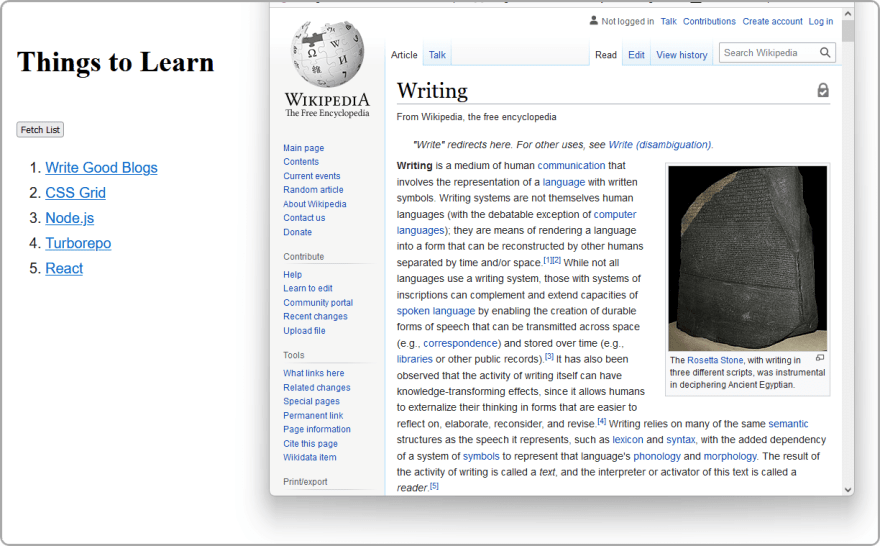 Go ahead, try changing some text in your DB and hitting the button again.

Well that's pretty neat! Now that you know how to do this, what cool projects can you think to build?

Remember that all code from this tutorial as a complete package is available in this repository.

Please check some of my other learning tutorials. Feel free to leave a comment or question and share with others if you find any of them helpful:

Once suspended, alexeagleson will not be able to comment or publish posts until their suspension is removed.

Once unsuspended, alexeagleson will be able to comment and publish posts again.

Once unpublished, all posts by alexeagleson will become hidden and only accessible to themselves.

If alexeagleson is not suspended, they can still re-publish their posts from their dashboard.

Once unpublished, this post will become invisible to the public and only accessible to Alex Eagleson.

Thanks for keeping DEV Community 👩‍💻👨‍💻 safe. Here is what you can do to flag alexeagleson:

Unflagging alexeagleson will restore default visibility to their posts.