In our last session, we've set up a new and clean React Native Project with Typescript and Linting Support. Today we will add React Redux to the mix, a predictable state container that will allow us to manage global state in one centralised place.

As always, you will find the finished code linked on GitHub at the end of the article. 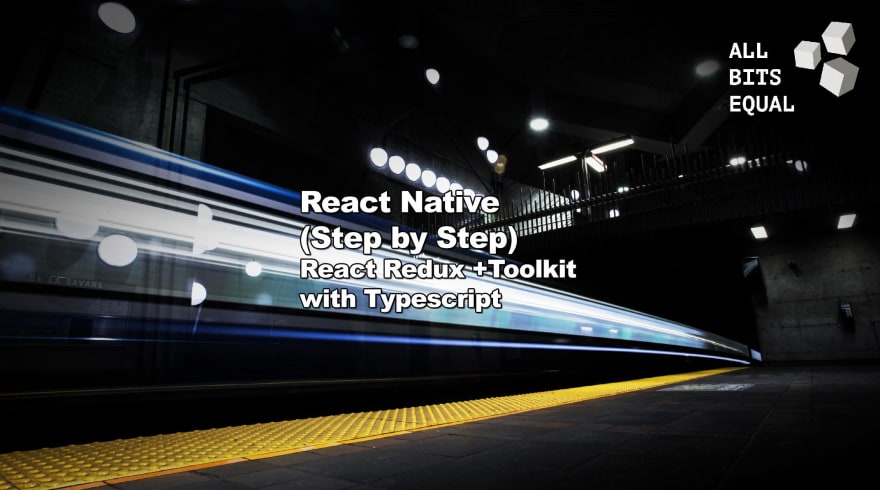 To get started, I’m assuming that you have basic knowledge of React Native and Redux. If you need a small refresher on Redux, I've got just the article for you! As we continue with the setup from our last session, we are still working with Expo to manage our React Native Build and bundling.

Grab the current project on Github.

I know that there's currently a great hype to remove Redux and other dependencies from all projects by completely replacing them with React Hooks but I'm still a firm believer in the ideas behind Redux and especially with the newest version of React Navigation (5.x at the time of writing), they improved the integration of Redux in the Navigator and we'll make good use of that in later sessions when we add React Navigation into the mix.

Please keep in mind that not every project NEEDS Redux but many CAN profit from using it.

In the past, I had decided to not work with Redux Toolkit. I used to prefer the hands-on way to do it as Redux is not scary and definitely not complicated, once you understood the basic priciples. I couldn't argue against the boilerplate argument there but then again it's not that bad and you do not spend THAT much time writing redux code in my experience.

That was "past me". "Present-day me" gave the toolset another go, made some prototypes with it, used it on a larger project and now has a sensible chuckle when thinking of "past me" vehemently NOT wanting to use it. You still write the same logic, you still write the same code more or less but you do write substantially less of it and the files are more compact and way easier to read.

Now the first thing we have to do is to create a store to house all our precious data. For this, we simply create a new index.ts under a new folder src/redux/ and let's start coding.

We need to configure a store with the handy function of the toolkit, add our rootReducer (where we gather all out reducers in one centralised place) and export the store we created.

Before we move on to write the missing rootReducer, let's first recreate THE tutorial reducer everyone is using, THE COUNTER, but with way less code, thanks to Redux Toolkit. I'm throwing this under src/redux/demo because I will delete it later but for now, let's make a counter.ts file.

Thanks to the toolkit, we don't have to do all the heavy lifting of creating the boilerplate code for actions, reducers, types and such. The redux-toolkit comes with multiple ways to go about this (including createAction and createReducer) but by far the easiest way to do this is using createSlice, which will be enough for most regular cases excluding maybe async stuff.

Looking at the counterSlide in detail, we are giving a name to our reducer (counter), defining its initial state and writing our two needed reducers to increase and decrease the state of our counter by the payload we send with the dispatch. You could split this up a bit more by defining the reducers first and referencing them here, in case your code is more complex but for now, we are set.

The createSlice function returns an object including (but not limited to) the actions and reducer we need to export to use throughout our app. With this in place, we can now finally add the missing rootReducer where we register all our reducers.

We now have a functional but still useless redux store. Everything we did up to this point is typed because most types can be safely inferred from usage by our typescript compiler and both redux and the toolkit come with all functions properly typed out of the box. Congratulations.

To add some functionality to our app, we have to create a component to consume the stored state and dispatch actions changing the state. In the past, we would have wrapped our component in a higher-order function called connect() to gain access to the store and being able to dispatch actions but thanks to React Hooks, we can now simply rely on useSelector() and useDispatch() to interact with redux via react-redux.

Create a new component file Counter.tsx under src/components/demo (again, we will get rid of this demo code at a later step in our series) and get the basic stuff in to display and interact with the counter.

Before we can use the new hooks with typescript, we need to touch our redux store again so let's move back to the src/redux/index.ts for a moment.

We will create an alias for both useDispatch and useSelector, add typing to them and then export those aliases so that we do not need to do this every time we want to use them. I chose to name them useReduxDispatch and useReduxSelector respectively to make them distinguishable but you can use any name you want. I simply advise not to call them useDispatch or useSelector to keep "future you" from having headaches when things get switched up.

We've added line 5 and 12 - 14 where we define our AppDispatch type and create our typed aliases. With those in place, let's finish up the Counter.tsx file.

Import the new useReduxDispatch and useReduxSelector and use them to dispatch actions on button click and link the counter with the current counter state.

Now everything is in place. Head back to the App.tsx which we haven't touched since the last tutorial and add our new Counter component instead of the placeholder text and, as usual, our Provider component to wrap our app and provide access to our store.

That's it. If you run the app with npm start and click the buttons, the counter will go up and down.

Make sure to run npm run fix to take care of any minor code style errors and confirm that we did everything according to our linting and rules and it's a wrap.

We've continued with our React Native Typescript project from last time and added a fully functioning and fully typed Redux Store in about 30 lines of redux code (imports excluded) and a few lines of tsx. That said, I should maybe rewrite my original redux article and the updated version will be a lot shorter...

Small side note, if you want to test your redux config with ease, use the web browser version from the Expo Web Interface and open your dev tools. With the right extensions installed (react + redux) you can look at all components and the store/state with an easy to use interface. 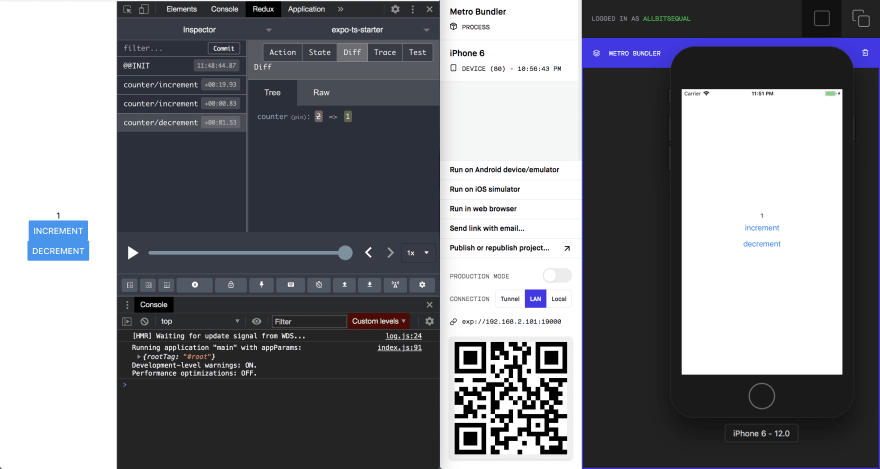 It ain't much and it ain't pretty but it works and it is typed and scaleable.

In the following sessions, we will have a look at how to make our redux store persistent, some basic solutions for navigation and project file structure.

Here is the promised link to the (Pre-)Release tag on Github.