Today we will be solving LeetCode's 'First Unique Character in a String'. Click here to pull up the challenge on your end and let's get started!

From this simple set of instructions, we can figure out a few things about what this challenge is asking of us:

Let's look at some of the examples LeetCode provides:

Let's look at example where no letters of a string are non-repeating:

Here, we are given an output of '-1'. The string s provides no non-repeating characters, so according to the instructions, we return the integer of '-1'.

Seems simple enough right? Let's try to code this out.

We will start by declaring a function called 'firstUniqCharacter()' which will take in 's' representing a string:

Now, we will build the foundation of an if-else statement because at this point we know if there are no non-repeating characters, we must return '-1':

Cool -- the foundation is laid. Now we have to consider a few important goals:

Given a string, that we must comb through to check for something specific, iteration is our best bet. Let's utilize a for loop.

A for loop basically says "while i is less than our input's length, continue to iterate and execute what is in the code block." The code block is represented by what is between the curly braces of our for loop. The 'i' represents the index of each letter of the string. So we can assume that 's[i]' equates to the value at that index. Let's see this in action:

Now that we have this in mind, we can use the index of each letter of the string to our advantage.

JavaScript has some great built-in methods regarding the indices of a string. For today's reasons, we will utilize indexOf() and lastIndexOf().

We know that for a character to be unique, its first index must equal its last index -- because it only appears once! Let's code this out:

In our if statement, our condition states "if the index of a character in the given string equals the last known index of that character, it must be unique". Then inside the code block, we return 'i' which is the index at which that unique character occurs.

Try this out in your console: 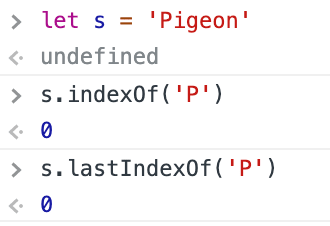 Nice! This checks out.

We found a great solution that not only works, but is readable AND scalable.

Here are some examples you can try in your console:

Today we discovered a bunch of really great stuff that will help with our journey to becoming coding masters:

Once suspended, am20dipi will not be able to comment or publish posts until their suspension is removed.

Once unsuspended, am20dipi will be able to comment and publish posts again.

Once unpublished, all posts by am20dipi will become hidden and only accessible to themselves.

If am20dipi is not suspended, they can still re-publish their posts from their dashboard.

Once unpublished, this post will become invisible to the public and only accessible to Adriana DiPietro.

Thanks for keeping DEV Community 👩‍💻👨‍💻 safe. Here is what you can do to flag am20dipi:

Unflagging am20dipi will restore default visibility to their posts.