As a developer, you have the power to change the world! You can write programs that enable new technologies. For instance, develop software to find an earlier diagnosis of diseases. But, that's not the only way, you might do it indirectly by creating projects that make people more productive and help them free up time to do other amazing things. Whatever you do, it has the potential to impact the community who use it.

However, these accomplishments are only possible if we write software that is fast and can scale. Learning how to measure your code performance is the goal of this post.

We are going to explore how you can measure your code performance using analysis of algorithms: time complexity and big O notation.

First, let’s see a real story to learn why this is important.

An algorithm that saved millions of lives

During War World II, the Germans used AM radio signals to communicate with troops around Europe. Anybody with an AM frequency radio and some knowledge of Morse code could intercept the message. However, the information was encoded! All the countries that were under attack tried to decode it. Sometimes, they got lucky and were able to make sense of a couple of messages at the end of the day. Unfortunately, the Nazis changed the encoding every single day!

A brilliant mathematician called Alan Turing joined the British military to crack the German "Enigma" code. He knew they would never get ahead if they keep doing the calculations by pen and paper. So after many months of hard work, they built a machine. Unfortunately, the first version of the device took to long to decode a message! So, it was not very useful.

Alan's team found out that every encrypted message ended with the same string: "Heil Hitler" Aha! After changing the algorithm, the machine was able to decode transmissions a lot faster! They used it the info to finish the war quicker and save millions of lives!

The same machine that was going to get shut down as a failure became a live saver. Likewise, you can do way more with your computing resources when you write efficient code. That is what we are going to learn in this post series!

Another popular algorithm is PageRank developed in 1998 by Sergey Brin and Larry Page (Google founders). This algorithm was (and is) used by a Google search engine to make sense of trillions of web pages. Google was not the only search engine. However, since their algorithm returned better results most of the competitors faded away. Today it powers most of 3 billion daily searches very quickly. That is the power of algorithms that scale! 🏋🏻‍

So, why should you learn to write efficient algorithms?

There are many advantages; these are just some of them:

Without further ado, let’s step up our game!

Algorithms (as you might know) are steps of how to do some task. For example, when you cook, you follow a recipe to prepare a dish. If you play a game, you are devising strategies to help you win. Likewise, algorithms in computers are a set of instructions used to solve a problem.

Algorithms are instructions to perform a task

There are "good" and "bad" algorithms. The good ones are fast; the bad ones are slow. Slow algorithms cost more money and make some calculations impossible in our lifespan!

We are going to explore the basic concepts of algorithms. Also, we are going to learn how to distinguish “fast” from “slow” ones. Even better, you will be able to “measure” the performance of your algorithms and improve them!

How to improve your coding skills?

The first step to improving something is to measure it.

How do you do "measure" your code? Would you clock "how long" it takes to run? What if you are running the same program on a mobile device or a quantum computer? The same code will give you different results.

To answer these questions, we need to nail some concepts first, like time complexity!

Time complexity (or running time) is the estimated time an algorithm takes to run. However, you do not measure time complexity in seconds, but as a function of the input. (I know it's weird but bear with me).

The time complexity is not about timing how long the algorithm takes. Instead, how many operations are executed. The number of instructions executed by a program is affected by the size of the input and how their elements are arranged.

Why is that the time complexity is expressed as a function of the input? Well, let's say you want to sort an array of numbers. If the elements are already sorted, the program will perform fewer operations. On the contrary, if the items are in reverse order, it will require more time to get it sorted. So, the time a program takes to execute is directly related to the input size and how the elements are arranged.

We can say for each algorithm have the following running times:

We usually care more about the worst-case time complexity (We are hoping for the best but preparing for the worst).

Here's a code example of how you can calculate the time complexity:

Find the smallest number in an array.

We can represent getMin as a function of the size of the input n based on the number of operations it has to perform. For simplicity, let's assume that each line of code takes the same amount of time in the CPU to execute. Let's make the sum:

All in all, we have 3 operations outside the loop and 2 inside the forEach block. Since the loop goes for the size of n, this leaves us with 2(n) + 3.

However, this expression is somewhat too specific and hard to compare algorithms with it. We are going to apply the asymptotic analysis to simplify this expression further.

Asymptotic analysis is just evaluating functions as their value approximate to the infinite. In our previous example 2(n) + 3, we can generalize it as k(n) + c. As the value of n grows, the value c is less and less significant, as you can see in the following table:

Believe it or not, also the constant k wouldn't make too much of a difference. Using this kind of asymptotic analysis we take the higher order element, in this case: n.

Let's do another example so we can get this concept. Let's say we have the following function: 3 n^2 + 2n + 20. What would be the result of using the asymptotic analysis?

Going back to our example, getMin, we can say that this function has a time complexity of n. As you can see, we could approximate it as 2(n) and drop the +3 since it does not add too much value as n keep getting bigger.

We are interested in the big picture here, and we are going to use the asymptotic analysis to help us with that. With this framework, comparing algorithms, it is much more comfortable. We can compare running times with their most significant term: n^2 or n or 2^n.

The Big O notation combines what we learned in the last two sections about worst-case time complexity and asymptotic analysis.

The letter O refers to the order of a function.

The Big O notation is used to classify algorithms by their worst running time or also referred to as the upper bound of the growth rate of a function.

In our previous example with getMin function, we can say it has a running time of O(n). There are many different running times. Here are the most common that we are going to cover in the next post and their relationship with time:

Assuming: 1 GHz CPU and that it can execute on average one instruction in 1 nanosecond (usually takes more time). Also, bear in mind that each line might be translated into dozens of CPU instructions depending on the programming language

As you can see, some algorithms are very time-consuming. An input size as little as 100, it is impossible to compute even if we had a 1 PHz (1 million GHz) CPU!! Hardware does not scale as well as software.

In the next post, we are going to explore all of these time complexities with a code example or two! 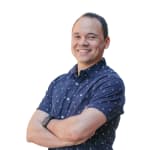 8 time complexities that every programmer should know

Are you ready to become a super programmer and scale your code?!

Check out the Github repo for more examples:

Data Structures and Algorithms explained and implemented in JavaScript

Data Structures and Algorithms in JavaScript

This repository covers the implementation of the classical algorithms and data structures in JavaScript.

You can clone the repo or install the code from NPM:

and then you can import it into your programs or CLI

For a full list of all the exposed data structures and algorithms see.

You can check out the dsa.js book that goes deeper into each topic and provide additional illustrations and explanations. 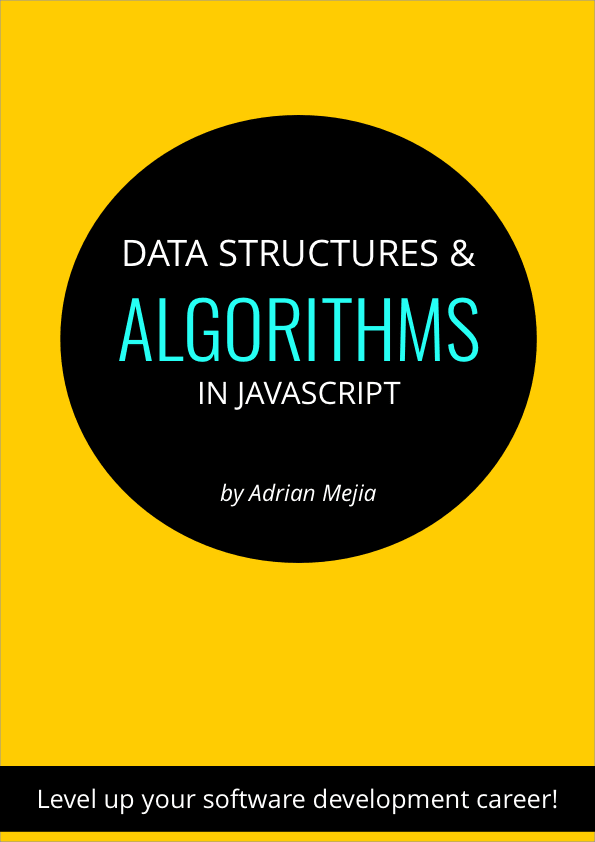 We are covering the following data structures. 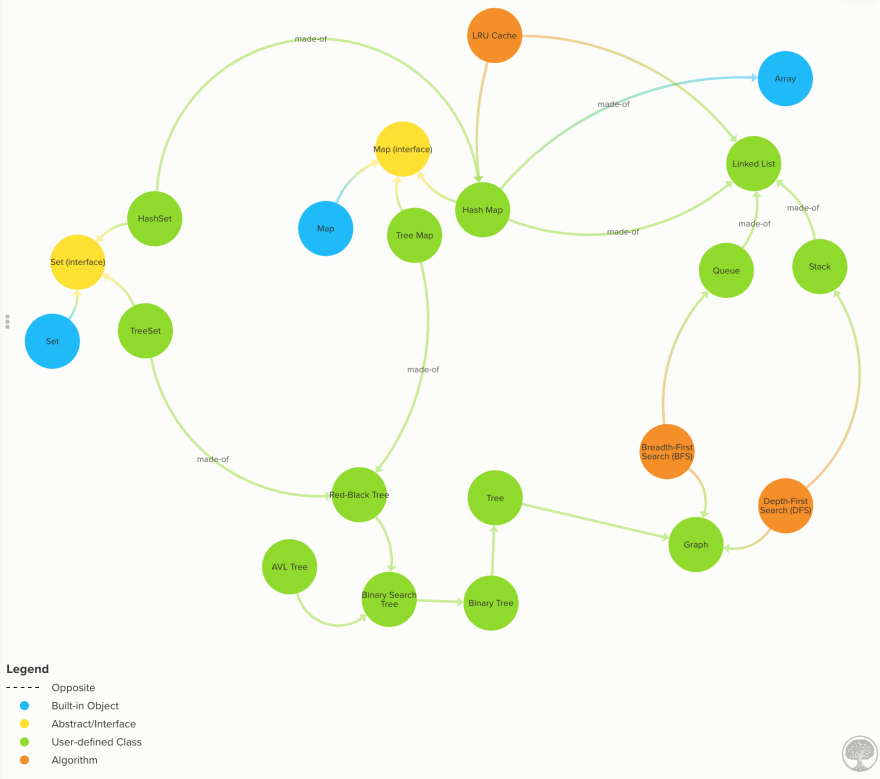 Once suspended, amejiarosario will not be able to comment or publish posts until their suspension is removed.

Once unsuspended, amejiarosario will be able to comment and publish posts again.

Once unpublished, all posts by amejiarosario will become hidden and only accessible to themselves.

If amejiarosario is not suspended, they can still re-publish their posts from their dashboard.

Once unpublished, this post will become invisible to the public and only accessible to Adrian Mejia.

Thanks for keeping DEV Community 👩‍💻👨‍💻 safe. Here is what you can do to flag amejiarosario:

Unflagging amejiarosario will restore default visibility to their posts.