Every week we read news about startups or multinational companies opening or moving their digital hub to Barcelona. Why? Well, in 2017, the most demanded profession by companies in Spain was Computer Engineer, also because of the tech ecosystem and leading innovation scene. Another reason is quality and cost, the level of developers in Barcelona is high while salaries are lower than in Berlin, London, Zurich, Paris, Amsterdam, etc. And of course – a quality of life!

Let’s look at this picture, where you will find companies that have opened or are opening their digital hub in Barcelona. 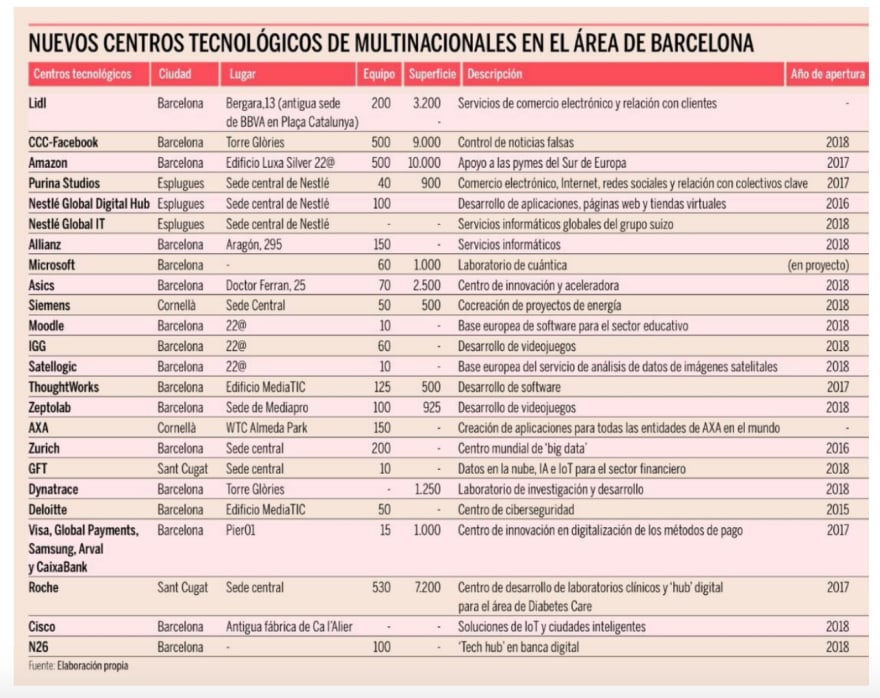 Well, let’s start with Facebook – social media giant. 500 people will work in Barcelona. Facebook decided to open an office in Barcelona as this city is growing very fast in terms of digital innovation.

The Australian Moodle settles in Barcelona

The Australian company Moodle also opens an office in Barcelona and creates 40 jobs. Actually, it will be their first office outside of its country of origin.

“Barcelona is a gateway to Europe, linked to many international capitals and is gaining a reputation in the online community and in software development,” says Martin Dougiamas, founder and CEO of Moodle.

Moodle was already in the city with a team that worked remotely, but with the opening of the offices will carry out software development and applications for mobile, as well as the personalization of services.

Argentina’s Satellogic is landing in Barcelona

Satellogic has located its European headquarters in Barcelona aiming to create a hundred jobs by 2020. At a press conference, the founder of Satellogic, Emiliano Kargieman, and the head of Satellogic Europe, Marco Bressan, explained that the company has chosen Barcelona for the talent and entrepreneurial ecosystem they have seen in this city. People in Barcelona office will dedicate to creating technological solutions to turn images into data.

The German distributor will have an office right in the center of Barcelona which will be dedicated to e-commerce and its digital business in Europe. Lidl is planning to employ 250 people. The office will have 3,200 square meters and will occupy four of the thirteen floors of the building, owned by Amancio Ortega. According to a statement from the real estate consultancy Forcadell, ” is considered as one of the most emblematic buildings of the Catalan capital.”

Microsoft is opening a quantum laboratory center in Barcelona, where it will locate a team of about 60 people. Quantum computing is one of the next technological challenges in the IT sector to develop computers that make complex calculations in a short time. And this is a good sign that Microsoft has chosen Barcelona to keep innovating.

The Russian videogame company Zeptolab moves to 22@ in Barcelona

The Russian company has moved to the 22 @ district – relatively new technology sector in Barcelona and where giants of the sector such as Amazon and Hewlett Packard are located. There, the group has rented a space of 925 square meters. In an interview with Kippel01, Xavier Monzó, president of the Association of Companies and Institutions 22 @ Network, assured that the infrastructure of the district, the innovation ecosystem are the main attractions of the area for the technology industry players.

Nestlé relies on the latest technology in Barcelona

Nestlé recently announced that it will move its IT activity from Switzerland to Esplugues de Llobregat, Barcelona, where it already has its global digital hub. The unit of Nespresso will also gain positions in Spain and Portugal, where it is planned to create 80 jobs.

Siemens will establish its new innovation center in Cornellà de Llobregat to develop digital solutions. Siemens will investigate how to obtain the maximum benefit of digital technology applied to energy and increase the efficiency of plants and factories, with the collaboration of suppliers, software engineers and experts from the industry.

Allianz, the largest insurance group in Europe, creates a technology center in Barcelona.

Allianz decided to choose Barcelona because of trained people in the technological field. Another reason is – capacity – to attract workers from other countries, which in certain cases can mean a reduction in costs.

N26 sets up a tech center in Barcelona

Another major fintech firm is setting up a tech center in Barcelona. N26, a global leader in digital banking, headquartered in Berlin, will soon open an office in the city. The FinTech firm plans to hire more than 100 engineers and product experts in Barcelona by the end of 2019.

The reason why they chose Barcelona:

“Barcelona will help us continue to grow as a world-class global technology employer by reaching more talent and offering more international opportunities for a highly diverse workforce,” said Valentin Stalf, CEO of N26.

Another reason is entrepreneurship spirit:

Francisco Sierra, general manager of Spain at N26, commented: “Barcelona is one of N26’s fastest growing cities, and it is important for us to stay close to our customers. The city shares the same international and entrepreneurial spirit as N26, making it a natural home for our first European team outside of Berlin.”

The Barcelona branch will focus on product and technology development. And CEO of N26 believes that this digital hub will imply greater flexibility for the employees in terms of location.

“Our team is one of the keys to our success, opening a new office in Barcelona will allow us to continue growing as a top-level technology employer and continue to attract the best talent, offering them international opportunities,” says Valentin Stalf, CEO of N26.

Also, Valentin says that Barcelona has consolidated itself as “one of the most mature epicenters of technology within the European ecosystem” since mobile applications account for 55% of the startups of the city. As since N26 is a mobile bank – it is just a perfect place for N26. Barcelona has a high quality of life, the ease of traveling to the city, the three top business schools and the volume of expatriates with a high academic level in the city.

It seems like it is not the end and we will see more companies opening their digital hub in Barcelona. Any ideas who will be next? Let’s discuss it in the comments section below.

I hope you found this article useful! If you are interested in latest news about Barcelona as a digital hub, I highly recommend you to subscribe to our monthly newsletter here.

Open Source: Many of the benefits of socialism without the baggage