These flexibilities help in code reusability, clean code, and composability. Today we will learn about Higher-Order Functions to use functions to their full potential in JavaScript.

If you like to learn from video content as well, this article is also available as a video tutorial here: 🙂

What are Higher-Order Functions?

A Higher-Order Function is a regular function that takes one or more functions as arguments and/or returns a function as a value from it.

Here is an example of a function that takes a function as an argument.

Now let us take another function that returns a function.

So, we understand what a Higher-Order function is. Now, let us understand why we need one and how to create it? How about doing it with a few simple examples.

The Problem: Code Pollution and Smell

Let's take an array of numbers,

Now let's write code to increment each array element by a number and return the modified array. You may think about writing it as a function.

Great so far. Now, if I ask you to write code to decrement each of the elements of the data array by a number and return the modified array? You may think about solving it in a couple of straightforward ways. First, you can always write a function like,

But that's lots of code duplication. We have written almost every line of the incrArr() function in the decrArr() function. So, let's think about the reusability here.

Now, you may want to optimize the code to have one single function performing both these operations conditionally.

So, now we rely on a third argument to decide if the operation is to increment or decrease the array's number. There is a problem too. What if I ask you to multiply each element of an array by a number now? You may think about adding another else-if in the doOperations() function. But that's not cool.

For every new operation, you need to change the logic of the core function. It makes your function polluted and will increase the chance of code smells. Let's use the Higher-Order function to solve this problem.

The first thing to do is create pure functions for the increment and decrement operations. These functions are supposed to do only one job at a time.

Next, we will write the Higher-Order function that accepts a function as an argument. In this case, the passed function will be one of the pure functions defined above.

How about trying the decrement operation now?

Did you notice that we didn't make any changes to our function to accommodate a new operation this time? That's the beauty of using the Higher-Order function. Your code is smell-free and pollution-free. So, how do we accommodate a multiplication operation now? Easy, let's see.

Next, invoke the Higher-Order function by passing the multiplication operation function, mul().

In JavaScript, there are plenty of usages of higher-order functions. You may be using them without knowing them as Higher-Order functions.

For example, take the popular Array methods like, map(), filter(), reduce(), find(), and many more. All these functions take another function as an argument to apply it to the elements of an array.

Here is an example of the filter() method that filters the array elements based on the condition we pass to it as part of the function argument. 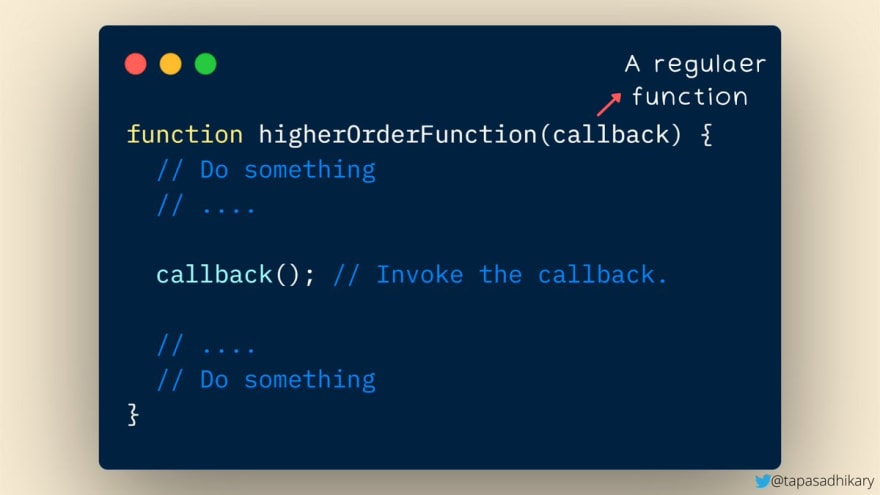 I will leave you with this article on Pure Function and Side Effects in JavaScript. I hope you enjoy reading it as well.

What are pure functions and side effects in javascript

You can find all the source code used in the article in this stackblitz project.


I hope you found this article insightful. Thanks for reading. Please like/share so that it reaches others as well.

Let's connect. I share my learnings on JavaScript, Web Development, Career, and Content on these platforms as well,

Once suspended, atapas will not be able to comment or publish posts until their suspension is removed.

Once unsuspended, atapas will be able to comment and publish posts again.

Once unpublished, all posts by atapas will become hidden and only accessible to themselves.

If atapas is not suspended, they can still re-publish their posts from their dashboard.

Once unpublished, this post will become invisible to the public and only accessible to Tapas Adhikary.

Thanks for keeping DEV Community 👩‍💻👨‍💻 safe. Here is what you can do to flag atapas:

Unflagging atapas will restore default visibility to their posts.