Reading this somewhere that’s not your email inbox? sign-up here.

Hello, I’m Lou 👋 and welcome back to Open Up The Cloud!

The newsletter is a little later than I usually send out, but… I did need some time to digest the absolute torrent 🌊 of Re:Invent announcements and analysis! This year’s Re:Invent was definitely less of a whizz-bang affair than in the past. Most say it’s because “AWS seemingly had nowhere else to go but up, as in abstraction layers” [1]. I mean, if we keep abstracting at this rate, everything will be YAML! [1]. AWS are seemingly grappling with either providing low-level “primitives”, or those developer experience and “frameworks” on top [1].

One big theme from Re:Invent that was clear is: The future is Serverless and event-driven[1][2]. AWS are continuing to invest in new instance types[1][2][3]. There were even some sustainability announcements [1], and a lot of improvements for machine learning[1][2]. 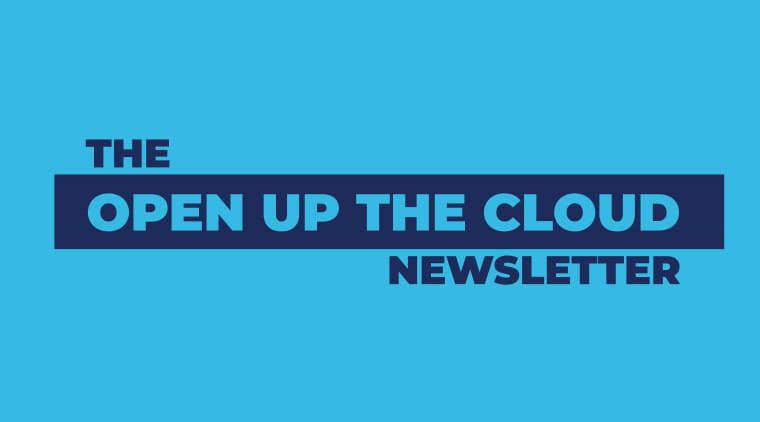 Let’s take a look through some of the announcements 👇

If you only read one or two things this month, let it be this.

Open Up The Cloud: Hangout — Actually, before we get to the Re:Invent links, let me tell you first about the Open Up The Cloud hangout, a casual Twitter space for you to bring your cloud resume or project [1], to be “reviewed” and discussed. We have some amazing folks coming: Linda Vivah (100% go follow Linda on Instagram) Brian Hough, the most friendly, energetic guy in tech and cloud. Andrew Brown—who has some of the most watched cloud certification videos on YouTube. The super hard-working and kind folks behind learntocloud.guide: Rishab, Antonio and Gwyneth, and maybe a special guest or two! It looks set to be a blast, join us! [1] If you share a resume or project to be reviewed, I’ll send you a copy of either Cloud Resume Challenge book, or The Tech Resume: Inside Out.

New stuff in the cloud, that you probably should know about.

Top announcements of AWS Re:Invent 2021, Re:Invent One Pager and this A Cloud Guru Article — All nice summaries of the main Re:Invent announcements. If you’re short of time, scan the one-pager document, and you’ll be (mostly) all caught up! … Kinda.

New Instances: M1, Graviton3 and more EC2 instance types — AWS have invested some more in a new line of their own Graviton3 chips. You can now access M1 instances via AWS, which are essentially “mac mini’s [1], but over the internet”. And finally, AWS announced a whole bunch of new EC2 image types, optimised for various aspects.

Control Tower Account Factory For Terraform — Setting up an AWS organisation isn’t easy, and when you try doing that with Terraform, it’s not any easier! You need to decide on things like patterns for your backend / state management (e.g. how many backend locations you want, and which AWS accounts those backends will live), and you’ll need to hand-roll a load of tooling to get things to work. This new module is kinda AWS out-of-the-box in a Terraform module. However… the code module behind the announcement only has only two contributors 👀. That said, it is nice to see AWS supporting Terraform more heavily. Earlier this year, AWS announced they would invest in officially supported Terraform modules [1][2], which now live under a new GitHub organisation called “AWS Integration & Automation” [1]. The terraform modules announcement did come with some criticisms, though about the lack of engagement with existing open source folks before announcing the project [1].

AWS Lambda Supports Cross Account ECS — AWS Lambda originally announced support for containers at last year’s Re:Invent [1]. It was an interesting announcement, because using Docker for serverless is somewhat antithetical to AWS Lambda [1]. With Docker, you are aware of your underlying infra (your image layers). Whereas AWS Lambda was (in a purist sense) about having as close-to-zero knowledge of the underlying infrastructure. When AWS announced container support, you could only configure to pull from an ECS repository from the same AWS account, which was a massive pain if you run a multi-account set up as you’d have to rebuild an artifact to do that. That’s now fixed!

CloudWatch Evidently — A service for A/B testing and feature flagging. However, the keen-eyed among you, will have noticed that Evidently looks incredibly similar to existing functionality in AppConfig [1]. AWS did acknowledge the similarities in the announcement post but didn’t go into great detail, leaving folks generally confused [1]. Seems like Evidently is intended to be a more fully-featured option, potentially meaning App Config might go away (or at least be pushed to the background) in the future.

AWS Console UI Improvements — This AWS UI announcement is a little weird in my opinion. Because there was always a bunch of nagging inconsistencies still in the AWS console UI… except they didn’t fix those, AWS kinda just sprinkled on some glitter instead, like a reintroduced favourites bar (which AWS took away last year and now they’re giving it back!) and dark mode.

AWS Re:Post — AWS must be struggling under their support burden, and are hoping that some community participation might help. AWS Re:Post is a smart bet, but I’m skeptical of the execution. It’s essentially like StackOverflow but for AWS. However, the service is odd, as posting is done via an AWS account, and as Corey Quinn points out, what happens if you move job? How do you take all your kudos and account with you? [1] If the service takes off, it could be a huge help, but I can’t say that I’m really sure why AWS decided to hide Re:Post behind an AWS login.

AWS Private 5G — This announcement is pretty wild. AWS Private 5G will make deploying a 5G network a lot easier than it is right now. Amazon is stepping truly into the mobile connectivity market, revolutionising telecommunications infrastructure as they have for so many other industries like web. AWS is even managing the shipping of hardware. What next—Starlink competition [1]?

RedShift Serverless, EMR Serverless, MSK Serverless, Kinesis Serverless — If it wasn’t already apparent that the future is Serverless, AWS are working through their services offering serverless options everywhere that they can. This announcement is also interesting as it seems to position RedShift close to BigQuery, which was always the poster-child and main service within GCP.

Reviewing A Real Cloud Engineers Resume — In this video I reviewed the resume of Alex, an aspiring cloud engineer. It’s a great looking resume and portfolio, but there were still some common pitfalls that you can avoid when putting together your resume.

What went down or got hacked?

AWS Went Down — This month AWS has been down a couple of times now in various ways. At one point they even took down their own status page [1].

Open Up The Cloud Updates ☁

A meta update about Open Up The Cloud.

Also, don’t forget to add a reminder for the Open Up The Cloud: Hangout!

Thanks as always for tuning in this month! Remember, any support that you give for Open Up The Cloud then gets re-invested in the community, in the form of gifted certifications, books, sponsors for open source and more! Thank you for being a part of the mission!

Reading this somewhere that’s not your email inbox? sign-up here.