In days of containers and serverless applications, Ansible looks not such a trendy thing.

The more I use mac1.metal in AWS, the more I see that Ansible becomes a bedrock of software customization in my case.

And when you have a large instances fleet, the AWS Systems Manager becomes your best friend (the sooner you get along together, the better).

So is it possible to use Ansible playbooks for mac1.metal on a big scale, with the help of AWS Systems Manager?

(Not) Available out of the box

AWS Systems Manager (SSM hereafter) has a pre-defined, shared Document that allows running Ansible playbooks.
It’s called “AWS-RunAnsiblePlaybook,” and you can find it in AWS SSM → Documents → Owned by Amazon.

However, this Document is not quite “friendly” to macOS. When the SSM agent calls Ansible on the Mac EC2 instance, it does not recognize the Ansible installed with Homebrew (de-facto most used macOS package manager).

So if you try to run a command on the mac1.metal instance using this Document, you will get the following error:

The root cause is trivial: the path to Ansible binary is not present on the list of paths available to the SSM agent by default.

There are several ways to solve that, but I believe that the most convenient one would be to create your custom Document — a slightly adjusted version of the default one provided by AWS.

Creating own SSM Document for Ansible installed with Homebrew

All you need to do is clone the Document provided by AWS and change its code a little — replace the callouts of ansible with the full path to the binary.

Navigate to AWS SSM → Documents → Owned by Amazon and type AWS-RunAnsiblePlaybook in the search field.

Select the Document by pressing the circle on its top-right corner and then click Actions → Clone document. 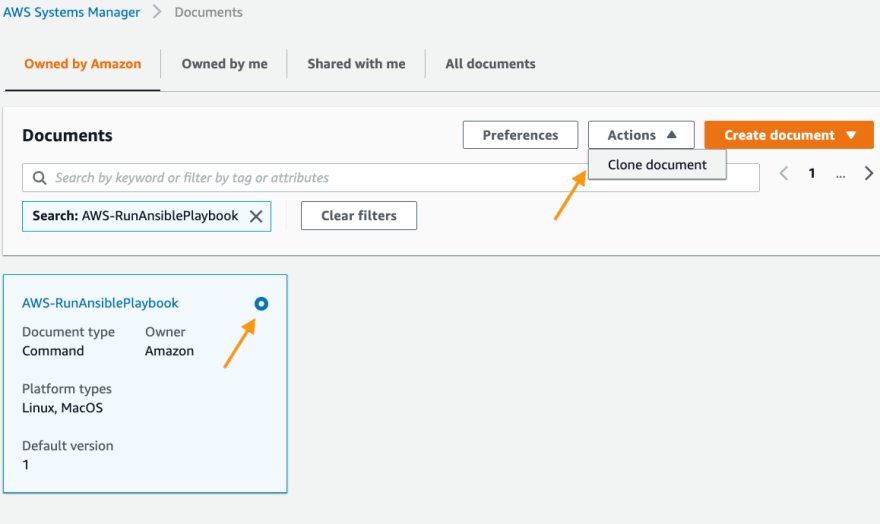 Give the new SSM Document a name, e.g., macos-arbitrary-ansible-playbook, and change the ansible callouts (at the end of the code) with the full path to the ansible symlink made by Homebrew which is /usr/local/bin/ansible

Here is the complete source code of the Document with adjusted Ansible path:

Applying Ansible playbook to the fleet of mac1.metal

Let’s give our new SSM Document a try! (I suppose you have at least one mac1 instance running, right?)

On the new panel, type the name of your Document (macos-arbitrary-ansible-playbook in this example) in the search field and press enter.

Select the Document, and you’ll see its parameters and settings.

The rest is self-explanatory. Enter either a playbook code or a link to the source file, add extra variables if needed, and select the target host or a filtered bunch (I like that feature with tags filtering!). Finally, click on the “Run” orange button to apply your playbook.

That’s it! Now you can make all your ansible-playbook dreams come true! 😁 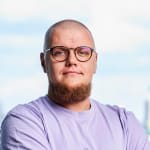 I am an engineer from Ukraine. I like astronomy and everything related to DevOps. I thrive on developing great product offerings, great people, and great teams.

Once unpublished, this post will become invisible to the public and only accessible to Serhii Vasylenko.