According to their docs graphql.org, GraphQL is a query language for APIs and a runtime for fulfilling those queries with your existing data.

Before you start with this blog post I'll recommend you know at least a good chunk on of typescript, graphql and nodejs, so lets dive in and get going :).

Firstly we would have to setup our project with node and typescript, run npm init -y to setup a package.json file.

If you noticed, we installed the types for all our main packages as dev dependencies, typescript requires this to validate the types when working with the main packages or else it throws errors, keep this in mind.

After installing all the packages we would need to create the server, we would need some kind of configuration to tell typescript what's going on in our project and how to deal with it, luckily we can get this configuration through a simple npx command,
npx tsconfig.json
Then choose the framework you are working with, in our case it is node

And zoom, you get a tsconfig.json file in the root of your project.

Go into the tsconfig.json file and check for your outDir and set it to "./build" and rootDir to "./".

Now go to your package.json file and locate the "scripts" section and add the following scripts.

Now lets get into the code hurrayyy!!!

Create a file named server.ts in the root of your project and import the your dependencies, initialize express and setup your localhost.

Open your terminal in your and run yarn build then yarn start or npm build then npm start, open your browser and navigate to http://localhost:4000, you should see the world Hello World! printed out.

Now lets get into the graphql part

We would add the express-graphql dependecy and some more code which would help us setup graphql playground in our browser.

The graphql playround is where we test our graphql queries, mutations and all other stuffs pertaining to graphql on the frontend, which i would talk about im my next post.

The graphiql set to true is what enables our graphql playround in the browser, if set to false it automatically disables the playground.

Now in your browser, go to http://localhost:4000/graphql 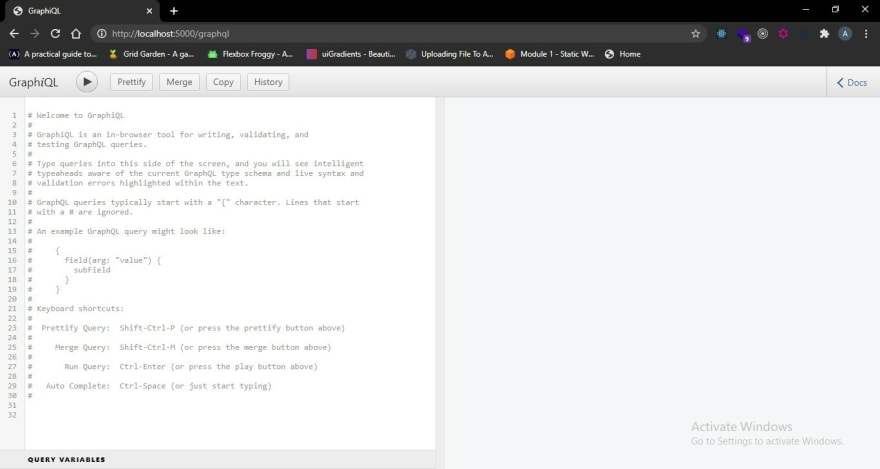 Hurray, you have created your first Graphql server!!! :).

We would be talking about queries in my next post, see you there ;)

Once suspended, ayeolakenny will not be able to comment or publish posts until their suspension is removed.

Once unsuspended, ayeolakenny will be able to comment and publish posts again.

Once unpublished, all posts by ayeolakenny will become hidden and only accessible to themselves.

If ayeolakenny is not suspended, they can still re-publish their posts from their dashboard.

Once unpublished, this post will become invisible to the public and only accessible to ayeolakenny.

Thanks for keeping DEV Community 👩‍💻👨‍💻 safe. Here is what you can do to flag ayeolakenny:

Unflagging ayeolakenny will restore default visibility to their posts.