This article is part of a series:

Welcome to the second part of this series about Docker. Hopefully, you have read the first part to gain some basic understanding of Dockers core concepts and its basic commands or you have acquired that knowledge elsewhere.

In this article, we will attempt to cover the following topics

Using Docker and containerization is about breaking apart a monolith into microservices. Throughout this series, we will learn to master Docker and all its commands. Sooner or later you will want to take your containers to a production environment. That environment is usually the Cloud. When you feel you've got enough Docker experience have a look at these links to see how Docker can be used in the Cloud as well:

Recap and the problem of not using a volume

Ok, so we will keep working on the application we created in the first part of this series, that is a Node.js application with the library express installed.

We will do the following in this section:

As our application grows we might want to do add routes to it or change what is rendered on a specific route. Let’s show the source code we have so far:

Ok, that looks empty. So we cleaned up last time with docker stop or docker kill , regardless of what we used we don’t have a container that we can start, so we need to build one. Let’s have a look at what images we have:

Ok, so we have our image there, let’s create and run a container:

That should lead to a container up and running at port 8000 and it should run in detached mode, thanks to us specifying the -d flag.

We get a container ID above, good. Let’s see if we can find our application at http://localhost:8000: 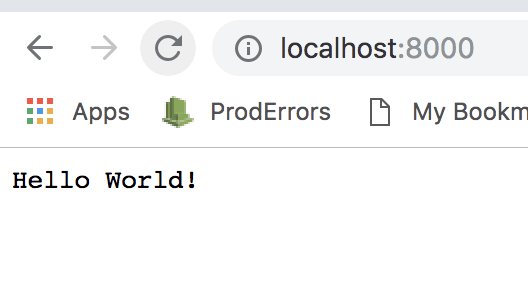 Ok, good there it is. Now we are ready for the next step which is to update our source code.

Let’s start by changing the default route to render out hello Chris , that is add the following line:

Ok, so we save our change and we head back to the browser and we notice it is still saying Hello World. It seems the container is not reflecting our changes. For that to happen we need to bring down the container, remove it, rebuild the image and then run the container again. Because we need to carry out a whole host of commands, we will need to change how we build and run our container namely by actively giving it a name, so instead of running the container like so:

This means our container will get the name my-container and it also means that when we refer to our container we can now use its name instead of its container ID, which for our scenario is better as the container ID will change for every setup and tear down.

You can chain these commands to look like this:

My first seeing thought seeing that is WOW, that’s a lot of commands. There has got to be a better way right, especially when I’m in the development phase?

Well yes, there is a better way, using a volume. So let’s look at volumes next.

Volumes or data volumes is a way for us to create a place in the host machine where we can write files so they are persisted. Why would we want that? Well, when we are under development we might need to put the application in a certain state so we don’t have to start from the beginning. Typically we would want to store things like log files, JSON files and perhaps even databases (SQLite ) on a volume.

It’s quite easy to create a volume and we can do so in many different ways, but mainly there are two ways:

Creating and managing a volume

To create a volume you type the following:

we can verify that our volume was created by typing:

This will list all the different volumes we have. Now, this will after a while lead to you having tons of volumes created so it’s good to know how to keep down the number of volumes. For that you can type:

This will remove all the volumes you currently are not using. You will be given a question if you want to proceed.

If you want to remove a single volume you can do so by typing:

Another command you most likely will want to know about is the inspect command that allows us to see more details on our created volume and probably most important where it will place the persisted files.

A comment on this though is that most of the time you might not care where Docker place these files but sometimes you would want to know due to debugging purposes. As we will see later in this section controlling where files are persisted can work to our advantage when we develop our application.

As you can see the Mountpoint field is telling us where Docker is planning to persist your files.

Mounting a volume in your application

Ok, so we have come to the point that we want to use our volume in an application. We want to be able to change or create files in our container so that when we pull it down and start it up again our changes will still be there.

For this we can use two different commands that achieve relatively the same thing with a different syntax, those are:

Used in conjuncture with running a container it would look like this for example:

Let’s try this out. First off let’s run our container:

Then let’s run our inspect command to ensure our volume has been correctly mounted inside of our container. When we run said command we get a giant JSON output but we are looking for the Mounts property:

and thereafter navigate to our /logs directory:

Mounting a subdirectory as a volume

So far we have been creating a volume and have let Docker decide on where the files are being persisted. What happens if we decide where these files are persisted?

Well if we point to a directory on our hard drive it will not only look at that directory and place files there but it will pick the pre-existing files that are in there and bring them into our mount point in the container. Let’s do the following to demonstrate what I mean:

The first two commands lead to us having a file structure like so:

Now for the run command to get our container up and running:

Let’s dive into the container and establish that the container has indeed pulled in the files from our host computers logs directory:

As you we can see from the above set of commands we go into the container with docker exec -it my-container bash and then we proceed to navigate ourselves to the logs directory and finally we read out the content of logs.txt with the command cat logs.txt. The result is logging host... e.g the exact file and content that we have on the host computer.

Wow, it changed in the container as well without us having to tear it down or restarting it.

Treating our application as a volume

To make our whole application be treated as a volume we need to tear down the container like so:

Why do we need to do all that? Well, we are about to change the Dockerfile as well as the source code and our container won’t pick up these changes, unless we use a Volume, like I am about to show you below.

Thereafter we need to rerun our container this time with a different volume argument namely --volume $(PWD):/app.

NOTE, if your PWD consists of a directory with space in it you might need to specify the argument as "$(PWD)":/app instead, i.e we need to surround $(PWD) with double quotes. Thank you to Vitaly for pointing that out :)

This will effectively make our entire app directory a volume and every time we change something in there our container should reflect the changes.

So let’s try adding a route in our Node.js Express application like so:

Ok, so from what we know from dealing with the express library we should be able to reach http://localhost:8000/docker in our browser or?

Sad face :(. It didn’t work, what did we do wrong? Well here is the thing. If you change the source in a Node.js Express application you need to restart it. This means that we need to take a step back and think how can we restart our Node.js Express web server as soon as there is a file change. There are several ways to accomplish this like for example:

It feels a little less cumbersome to just install a library like nodemon so let’s do that:

This means we now have another library dependency in package.json but it means we will need to change how we start our app. We need to start our app using the command nodemon app.js. This means nodemon will take care of the whole restart as soon as there is a change. While we are at it let’s add a start script to package.json, after all, that is the more Node.js -ish way of doing things:

Let's describe what we did above, in case you are new to Node.js. Adding a start script to a package.json file means we go into a section called "scripts" and we add an entry start, like so:

By default a command defined in "scripts" is run by you typing npm run [name of command]. There are however known commands, like start and test and with known commands we can omit the keyword run, so instead of typing npm run start, we can type npm start. Let's add another command "log" like so:

Ok, one thing remains though and that is changing the Dockerfile to change how it starts our app. We only need to change the last line from:

Because we changed the Dockerfile this leads to us having to rebuild the image. So let’s do that:

Ok, the next step is to bring up our container:

Worth noting is how we expose the entire directory we are currently standing in and mapping that to /app inside the container.

Because we’ve already added the /docker route we need to add a new one, like so:

Now we hope that nodemon has done it’s part when we save our change in app.js :

Aaaand, we have a winner. It works to route to /nodemon . I don’t know about you but the first time I got this to work this was me:

This has brought us to the end of our article. We have learned about Volumes which is quite a cool and useful feature and more importantly I’ve shown how you can turn your whole development environment into a volume and keep working on your source code without having to restart the container.

In the third part of our series, we will be covering how to work linked containers and databases. So stay tuned.

5 Repository for beginners in Hacktoberfest

Node.js from Beginners to Advance

Difference between Methods and functions in Javascript