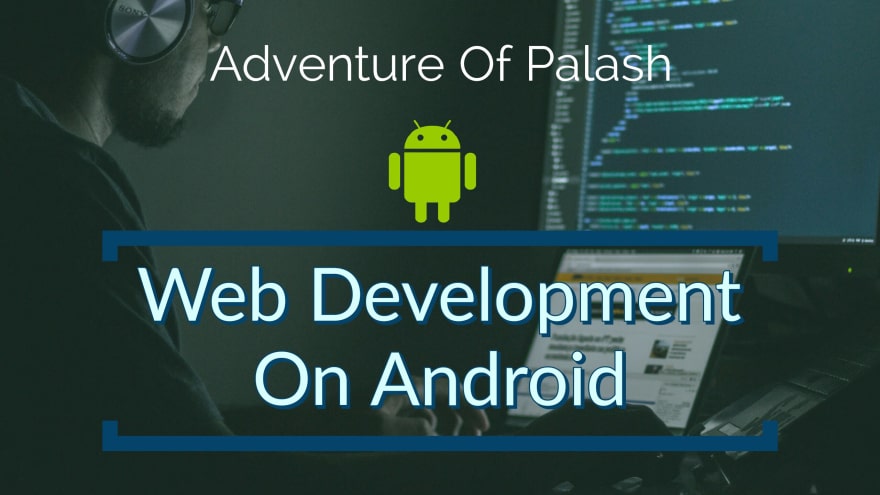 Web Development is a trending Career Path with great amount of job opportunities. Most Of People Thinks With a Computer it's impossible to do web development. Today will find out how we can start web development on your Android Phone.

Android is based on Linux Kernel so it's definitely possible to do almost anything which we could do in a Linux Computer.

If you don't have Desktop/Laptop but want to start web development you're not alone , I was also was in the same place few years ago. I had a old J2ME phone that time but nowadays most of people has a Smartphone.
if you have a Android Phone in hand and creativity in mind that's all we need to start our journey in web development with our android phone.

I've divided this guide into several parts so it would be easy for newbies.

If you look into Play Store, you'll find lots of solutions to learn about Web Development, but few of them are actually useful.

So Today I came up with a list of useful resources of Web Development on Android.

It has much more useful features such as you can ask questions if you had problems, show your code to world and much more.

You Can learn basics as well as advanced JavaScript , you can also learn about useful JavaScript libraries such as D3Js from Grasshopper. You also learns Animation with JS use of Canvas and much more

Similar to SoloLearn it has great resources to learn HTML , CSS , JavaScript.

You can also learn Other languages with Py

Here Are some best Code Editors for Android,

AIDE Web is one of the oldest available web development solution for android. It's a fully fledged IDE with plenty of useful functions.

I recommend this for you

It's one of the best code editor available out there , you can write HTML, CSS, JavaScript in it and preview the Compiled HTML

It supports huge range of Languages it's quite lightweight only 3.3MB

It's my favourite editor for android

It's a lightweight buy powerful code editor for Android , it supports plenty of programming languages , it also supports opening files directly from Dropbox.

You can also preview the HTML in browser.

It's the most popular Non-Coding website builder on play store. Used by millions

At first it might look messy but if you enough time with it , it would br easy to understand.

The thing I didn't like about this is , it's UI , it looks old and messy , if using a tablet or a phone with large screen it's bearable but if using phone with smaller screen , sometimes it becomes headache.

But You Should Give it a try

I used it a lot for creating website prototypes. It uses Bootstrap CSS Framework by default.

If you've completed building your webpage you might want to show it to the world , just take a look at below

Part 2 : Serving From and Testing on Phone

If you don't have a hosting service or server of your own or just want to test your websites , don't worry , you can serve and test your site from your android phone

If you want to serve website from your android device , it's the preferred server, but serving a website from Android can harm your device.

It's one of the widely used web server for Android available out there. It has plenty of useful features.

It's quite lightweight and easy to use

Install it From Play Storr

Got Problem With Setting Up Paw Server, Follow this Guide

It's not a app but a list of app which are Servers for Android developed by Tautvydas Andrikys aka. esminis.

They Are The Preferred And Powerful way to test your websites on Android.

Check Them Out Here

If you own a hosting service , you'll need to upload yout site there to make it available to world, Best Way to Upload Files to Hosting Provider , is FTP (unless they don't support FTP)

It's one of the oldest and widely used FTP Client for Android available out there.

It's Simple, Lightweight and Powerful

It's All in one solution for file management.

It can be also used as FTP Client. It's a Powerful Solution

It's a Fast and Fully Featured FTP Client for Android.
It has a modern material design

If you want to use SSH to upload or sync files from your Cloud , use this it's Open Source SSH client for Android

Thank You for Reading!
That's It For Now, See you Next Time
Let Me Know Your Suggestions, Problems in the Comments Below 👇