Technical debt as a metaphor is not serving our profession well. It was meant to help us talk to business people and make better decisions about our software projects. But it has largely been a failure. Part of the problem is that business people aren't afraid of future interest payments.

In business school, I learned about the power of leverage: what it is, how to get it, how to measure it, and how to manage it. Debt is a tool. My fellow business school grads are comfortable with leverage and debt. So when the programmers come to the business people complaining about technical debt, the business people are unconcerned. And why would they be? The metaphor is misleading; technical debt is only superficially similar to financial debt.

This is really unfortunate for three reasons:

No matter how much technical debt your project has, you can always make it worse. You'll always face both internal and external pressures to take a shortcut here, avoid a refactoring there, and release that new feature without automated tests.

How to advocate for the code

You need to educate stakeholders in your company about the software development process. Your job is not done until you are sure they understand the trade-offs and risks involved in taking shortcuts. I'm going to use the remainder of this post share my tactics.

You need to get the business people involved in your process. The more they internalize your struggles and challenges, the better.

You'd be hard pressed to find a business person who didn't want to discuss an opportunity to have the software developers deliver:

Your general thrust here could be that your company is missing out on high value opportunities. And that you'd like some advice from the business people on how you can capitalize on those opportunities and make things run more smoothly/efficiently/effectively.

Depending on your audience, you might find another approach to be more persuasive. Business people are trained to manage risk and you can use that to your advantage by framing the situation as one of managing increasing risks.

Here are some risks of making messes in your code:

One of these two strategies will likely get the attention of your business people.

Get them involved in your meetings

The best thing my team ever did was adopt SCRUM. Our product owner really 'got it' once he attended a few of these meetings. He also became a captive audience for an hour or so per week during these meetings. I took full advantage of the opportunity to increase his understanding whenever I could.

These meetings make abstract ideas about 'going slow' or 'bad code' more concrete. For example, we look at all the stories where we missed our estimates by a wide margin at our retrospective and talk about why that happened. But it's quite another thing to listen to a programmer take 20 minutes to explain all the reasons why a simple change to the system took 40 hours (10 times the estimate). When that happens sprint after sprint, the business people can't help but buy into it. I find it especially helpful if you get them involved in the root cause analysis and help you formulate solutions to the problems.

Make a distinction between technical debt and crappy code

Technical debt has expanded from its initial definition to include almost any undesirable quality of code. At my workplace, we are resisting this trend. We make a distinction between technical debt and crappy code.

is a deliberate decision to take a shortcut to achieve a short term goal at the expense of an unknowable long term cost.

is any other kind of shortcut that is not technical debt.

Whereas we allow a limited amount of technical debt into our code base, we have a zero-tolerance policy for crappy code. We made this policy after a long series of discussions and root cause analyses. We decided that the only reasonable way to move forward with our project was to stop allowing crappy code into the code base. To that end, all code is reviewed and it doesn't get merged with master until it meets our quality objectives (see our code review checklist). If that means a change takes ten times longer than we originally estimated, so be it.

Of course, it's not as black and white as that. Programmers make judgment calls every day. But our talk, actions, and behaviors are all aligned towards the production of zero lines of crappy code. We've made it part of our culture.

Show them the research on the cost of crappy code

Business people generally have no idea how bad crappy code is for the health of their software. So, I've made it my job to educate them.

I lent my copy of "The Software Project Survival Guide" (Steve McConnell) to two senior people in my company. This book is getting dated but the first 5 chapters are absolutely worth their weight in gold.

I show anyone who will pay attention to me page 4 of "Clean Code" (Robert C. Martin). On this page Uncle Bob describes the total cost of owning a mess. And I especially love pointing to the graph at the bottom of the page (reproduced below) and asking them where they think we are on it. 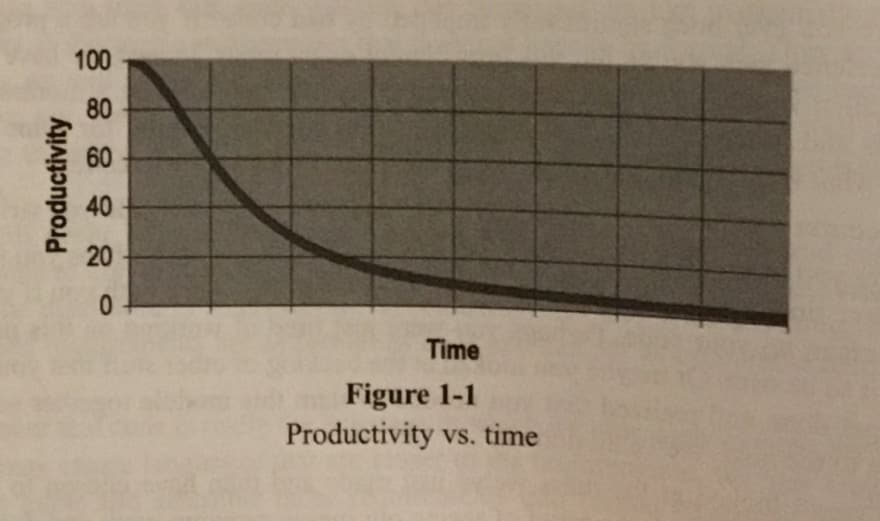 I also show people my copy of "Facts and Fallacies of Software Engineering" (Robert Glass) and use it to stimulate software engineering discussions.

I advocate aggressively for our code, our team, and our sanity. I'm really trying to get three points across:

Show them examples of crappy code in your project

I've gone as far as literally emailing screenshots from my IDE to our senior people. I found one email I wrote last year that had screenshots showing:

I wrote that email to:

Quality and speed are not opposites

I love this one. Steve McConnell published an article titled Software Quality as Top Speed. He argues that:

In software, higher quality (in the form of lower defect rates) and reduced development time go hand in hand.

This article is well argued, written by an expert, and it is backed by research, which is clearly referenced in the foot notes. Read it. Bookmark it. And realize that it is a powerful weapon in your arsenal to combat suggestions that your team would go faster if they'd just stop doing so much QA or upstream planning.

Bend over backwards to make the business successful

All your efforts will be for nothing if the business people think--even for a second--that the best interest of your business are not your top priority. You can't just say that you aren't going to accept any technical debt from now on no matter what. You can't say you are going to do things "the right way" from now on and they'll just have to get over it.

You're all on the same team. And your objective is to make as much money for your company as possible. So when the business people say they need a new feature in 5 weeks and you think it will take 20 weeks, you (collectively) have a problem that needs solving.

And you, as the software expert, have plenty to contribute. Why do they need this feature? Do they need the whole feature all at once? Could it be broken into phases and you just deliver the first phase in 5 weeks? Could you change the spec to make the feature easier to implement? Could you build a completely different feature in five weeks that delivers the same sales and profit impact? Could you integrate with an API and cut your development effort? Could you deliver a minimal version of the feature in five weeks and follow up immediately with an enhanced version? Could you outsource some of the work?

There are lots of possibilities besides hacking something together, and kicking it out the door. And if you've been laying a good foundation with the other steps, perhaps you can keep things from coming to that.

For example, I avoid blanket statements about our code base. Some code is bad, some isn't so bad, and some is actually pretty good. So I never say that we can't make a change. But I will say that this change would require substantial modification of that really ugly module without tests I was telling you about last week. The original author is long gone and we don't really know how it works. I would say this change would take a many months of effort; would you like me to work up a detailed estimate?

In a case like this, my estimate would include a range that communicates the uncertainty involved in a change of this magnitude. My estimate for this change might be 3-8 person months with 85% confidence. That means I think there it an 85% chance that we could deliver this change in 3-8 person months and that there is a 15% chance the actual effort could exceed that range on either end.

And no, I can't do better than that. That's the estimate. We can create another estimate if we modify the scope of the change but I always give my best estimate the first time. And I don't allow myself to be bullied into lowering it.

The real wins come when you understand where the business people are trying to go and you can make suggestions and plans to help them get there faster or at least avoid the land mines along the way.

When all else fails, you might have to quit

If you find yourself in this situation, you have some decisions to make. Let me just say two things. First, there are companies that actually care about the quality of their software and the morale of their developers. And second, high quality software developers are in huge demand so you shouldn't have too much difficulty finding another job if you wanted to make a change.

When programmers add crappy code to a project with a long life expectancy both research and hard-won experience show they are almost certainly taking on more cost and risk than they realize. You'll face all kinds of internal and external pressures to deliver features faster. But always remember it's your job to advocate for the best interest of your code and your business.

Blaine Osepchuk
Blaine Osepchuk
I'm a small business programmer. I love solving tough problems with Python and PHP. If you like what you're seeing, you should probably follow me here on dev.to and then checkout my blog.
• Oct 31 '17

I agree. If a significant number of your teammates don't really give a crap, it's hard to make things better with improved communication.

An Engineer’s Guide to TODOs: How to Get Things Done

Blaine Osepchuk
I'm a small business programmer. I love solving tough problems with Python and PHP. If you like what you're seeing, you should probably follow me here on dev.to and then checkout my blog.
How to be more successful at software maintenance
#codequality #technicaldebt #softwareengineering #refactoring
Safety-Critical Software: 15 things every developer should know
#codequality #career #management #professionalism
The ONE chart every developer MUST understand
#codequality #testing #programming #books

Once unpublished, this post will become invisible to the public and only accessible to Blaine Osepchuk.

Thanks for keeping DEV Community 👩‍💻👨‍💻 safe. Here is what you can do to flag bosepchuk:

Unflagging bosepchuk will restore default visibility to their posts.