When are working on a software project a common task during the process will generate a changelog when a new software version is going to be released. It will contain all the changes, bug fixes, and new features made since the last release.

Generally, changelog creation is a manual task that takes much time and includes errors during the process from the people that are involved in the software process. For that reason during this post will be described some helpful tools for that specific process to save a lot of time.

Semantic versioning is a versioning system that has been on the rise over the last few years. The release has always been a problem for software developers, release managers, and others involved in the development process. Thus a universal way of versioning the software development projects is the best way to track what is going on with the software as integration new plugins, addons, libraries, and the new features that will be created almost every day. 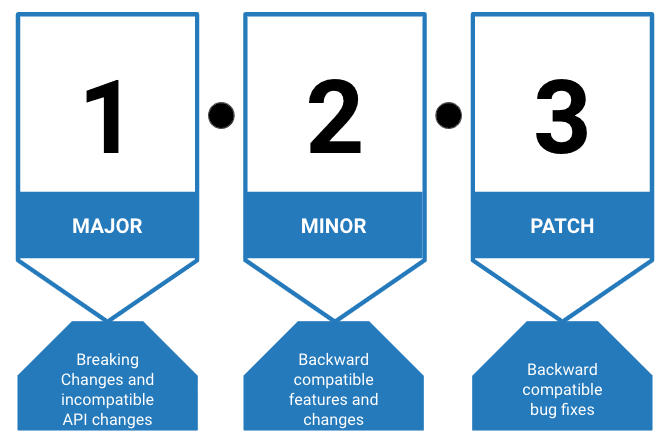 Given a version number MAJOR.MINOR.PATCH, increment the:

Additional labels for pre-release and build metadata are available as extensions to the MAJOR.MINOR.PATCH format.

First of all, we need to use and standardize in our project the commits, For that can be used this previous post Integrate Commitizen with your node.js project or integrate a standardization based on Conventional Commits Specification

The Conventional Commits specification proposes introducing a standardized lightweight convention on top of commit messages. This convention dovetails with SemVer, asking software developers to describe in commit messages, features, fixes, and breaking changes that they make.

The main reason to do that is that the commits will be used to generate the automatic changelog file.

First of all, we need to install a new dependency

After that, you can add some new npm run scripts to the package.json file

The changelog generation can be configured via a .versionrc.json file or placing a standard-version config in package.json.

In this case, we will create the .versionrc.json file based on the Conventional Changelog Configuration Spec

Will generate the next output

Once suspended, brayanarrieta will not be able to comment or publish posts until their suspension is removed.

Once unsuspended, brayanarrieta will be able to comment and publish posts again.

Once unpublished, all posts by brayanarrieta will become hidden and only accessible to themselves.

If brayanarrieta is not suspended, they can still re-publish their posts from their dashboard.